Where to start Rune Mechanics:
Speak to Apprentice Clerval in the basement of the Mage Training Arena.

What’s worse than an annoying mage? An annoying mage that is a clutz! Clerval, one of the new apprentices at the Mage Training arena, is completely useless. That’s proved multiple times during the newest quest, Rune Mechanics.

Did I mention he wasn’t very bright? Because of this he requires the assistance of another budding mage to do something that hasn’t been accomplished in centuries – build a rune guardian completely from scratch! To do this he tells you you’ll need to talk to three other mages: Wizard Dougal, Wizard Edvin, and Wizard Shug.

Wizard Dougal explains about the runes required to build the Rune Guardians. He says that they used steam, mind, and body runes. The Mind and Body runes are easy to acquire (especially if you stock them like I do) but the steam runes are a bit harder. Infact, Dougal doesn’t even think you can do it.

Of course we must choose how to answer him in the..’kindest’ way possible…

After you tell him off or compliment him he’ll tell you the insane amount of runes you’ll need.

Insanely small that is. He’ll give you a fire and water talisman, a binding necklace, and 10 noted rune essence. The closest place to create steam runes is the fire altar so go unnote the essence, withdraw five water runes from your bank, and then head on over to it. Once there use the water talisman on the Fire rune altar while wearing the binding necklace to get 5 steam runes. Then take them back to Dougal and…

Well that’s that atleast. You’ve earned a little respect from him…I think. Now that you have 5 steam, Mind, and Body runes head to the next room over and talk to Wizard Edvin.

Edvin is much nicer, though seemingly a bit absent minded (though this might be because he has alot on his mind). He’ll tell you what he knows if you solve his teleport maze.

The maze rooms are based on chess pieces. Some rooms have an icon with one dot, others have three diagonal dots, others look like a cross, some are a square with a dot in the center and some are in a L-shape. The pieces are Pawn, Bishop, Rook, King, and Knight respectively. To complete the maze go through the west portal in the first room and then through the north portals for the next 3 rooms. Once you reach the end go through the exit portal. Edvin will now give you some information and his tool for shaping the body of the guardian.

Shug is located upstairs on the second floor (or first for you British blokes). You’ll find him snoozing in the room with the large Rune Guardian that has the pizazz point shop. Just poke him and he’ll wake up.

…There isn’t even a cat in the Mage Training Arena…

Anyways, once you have 5 pizazz points and talk to him he’ll tell you about Sedridor and how to enchant Emeralds. When done speaking with him return to the basement and operate the workbench near Clerval to enchant your cut emeralds.

Give him the 5 steam, body, and mind runes, 2 Enchanted cut emeralds, Edvin’s tool, and 20 rune essence if you haven’t already.

Now talk to Clerval and he’ll say he needs you to fix the wires on the table.

Ofcourse you get to choose how you wish to handle this…

Once you get done talking to the lad click the controls on the table to work on the puzzle. It’s a fairly simple one: 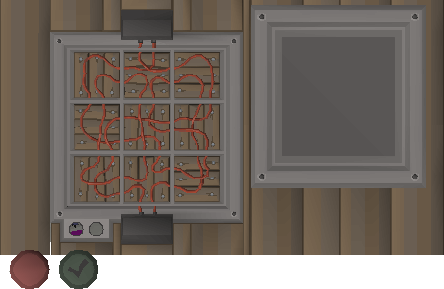 Use the tool on the lump of essence that he gives you to carve the guardian pieces.

Talk to him again and a cutscene will ensue with the machine activating. 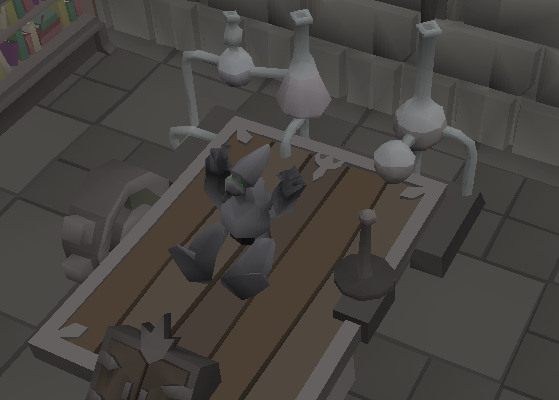 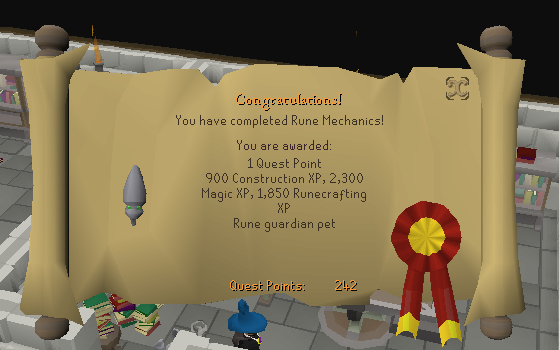 The Rune guardian is a little different from other pets. Rather than eating or otherwise consuming something, the guardian requires you to bring it near a runecrafting altar when its hunger-meter gets high. Alternatively you can bring it to your Menagerie.

A few other things were changed today also:

Based on your feedback, we’ve changed the stats on the Penance armours from Barbarian Assault. Check out this Knowledge Base page for more details on these items.
Somehow most of the BA rewards had been changed into being almost complete duplicates of rune items. They now have their original stats.

We’ve added a second trident to Barbarian Assault’s rewards. The original trident remains unchanged, but can now be upgraded to a master trident for free. The master trident has an Attack level requirement of 70 due to its increased melee combat stats (in addition to the Magic level requirement of 70 it shares with the original trident).
Basically just a slightly better version with higher requirements. Unfortunately it’s only better in melee and gives no damage bonus to spells (which annoyed many players).

We’ve updated the Adventurer’s log to contain a larger selection of NPCs including, but not limited to, the KBD, the Penance and Kalphite Queens, and the Corporeal Beast. A log will be created any time you defeat these creatures. Additionally, instead of spamming your log with “I’ve killed a creature” for every one that you defeat, it will now attempt to group these together in one message.
Yay, less spam on our logs.

We’ve added a feature to allow you to more easily reply to the last private message you received: just hit the ‘TAB’ key on your keyboard!
Very useful.

We’ve changed the gnome restaurant and associated shops in a few ways. Firstly, if you complete a delivery task, the food and cocktail ingredients shops will be restocked. Secondly, we’ve adjusted the rewards for the deliveries, so you’re more likely to get better items such as mint cakes or seed pods.
Never played this mini-game but this sounds useful.

All types of spirit shield have now been properly textured and should match the recently updated inventory icons.
Yay for texture improvements.

You may have noticed that cannons were not always hitting the enemy they were aiming at. The targeting code has been improved and should have more consistent behaviour in all directions.
I had not experienced this, but it’s good they fixed it, if it needed fixing.

A more detailed explanation of how the ring of wealth works has been added to the this page in the Game Guide.
If you use RoW I’d suggest reading the article as it helps identify how it’s used.