Hold Me Down – You Me At Six 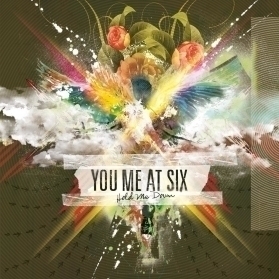 You Me At Six are a British pop-rock band, looking to break into the USA after being on the Warped Tour last year. 2007’s Take Off Your Colours charted fairly well, although 25th in the UK chart was nothing to shout about. Hold Me Down looks to better that, the songs feature less guitar hooks and more catchy choruses that sound as if they were almost made for the radio. The lyrics to the songs are quite deep, based on sad occurrences in lead singer Josh Franceschi’s recent life. The melodies and rhythms in the majority of the songs contrast this theme quite starkly, which is a relief because I think that a step toward the emo genre would be a bad move for the band. Many of the songs feature heavy bass, from both the drums and bass guitar. In addition, the frequent breakdowns, often featuring just the bass drum, are a fantastic addition to the album and add an awesome effect to some of the songs, Underdog in particular.

The album features wisps of various genres, Fireworks bringing a ballad-type feel, whilst Playing The Blame Game adds a arguably rockier feel to the album. The guitar intro on Trophy Eyes sounds suspiciously like Paramore, although that would come as no surprise, having supported them on their recent stint of UK arena tour dates. Moreover, the vocal section before the chorus of The Consequence has themes of Enter Shikari’s early work running through, which is by no means a negative issue.
The opening song, The Consequence, really sets the tone for the album really well, combining bassy drum work with intricate guitar work and great vocals, although sometimes the vocals featuring a small group of people can seem slightly sloppy but it could be argued that his adds to the song. This song is probably one of the heavier songs on Hold Me Down but still it could quite easily be played on the radio and fit in reasonably well.

Underdog is to be the first single off of Hold Me Down and in my opinion it is easy to see why. The opening drum beat is commanding and the distorted guitar opening is great, contributing significantly toward their growing pop-punk image. The pop factor comes in the form of an extremely catchy chorus that will have you humming or singing all day, as it did the day I got the album. The heavy bass drum beats that streak throughout the verses of the song is awesome, giving you a shaky floor if your subwoofer is turned up loud.
The song lyrics speak largely of love issues, arguments and general problems encountered by a young adolescent male, something that probably causes You Me At Six to extend their empire beyond their original fanbase made up predominantly, of young screaming girls. The choruses feature great harmonising with consistently good drums and guitar. Hold Me Down is sure to propel YM@6 into the mainstream, especially after charting at #4 in the UK charts, 21 places above their debut album. It is yet to be seen how well Underdog does as a standalone single but either way, Hold Me Down will be regarded as a success.

This article is filed under Music. You can follow any responses to this entry through the RSS 2.0 feed. Both comments and pings are currently closed.
Navigation