Magic, the last SKOTM (Skill of the Month). The SKOTM where I got 1m magic xp on the last day of the competition by planking, that’s right, planking. Get where I am coming from. When you hear magic, and how to level it. Unless you’re 99 already, or high 90’s already, you’re going to think Alching to 99. Alching is most likely the most popular way to get to 99 Magic, or any magic level, due to the low Magic level needed. If you can find an item that makes you profit, or give a little loss, it’s a fast way to get to 99 Magic. This article, along with about a years worth of articles, is going to talk about the different ways to get to 99 in any skill that most people might not know about. This article, about magic, is going to go over 6 methods of how to get 99 magic. All the different spell books are going to be talked about, but there are headers in case you just want to read about one type of spell book. 😉

The standard spell book is the most used spell book (unless you have 96+ magic and you don’t need to do any battle spells) and has two real “get to 99 magic fast” spells. Those are High Alchemy and Superheat Item. Of course alching is the most popular so I’m not going to go to much into it but basically you: find an item you want to alch, get a nature rune and 5 fire runes and you’re set. The only way, that I know of, is to make each part of the alch. What way you lose nothing. This website shows what items you will not lose any money on, as long as you can buy the item at the price it shows. Overall, alching loses a lot of money but if you don’t mind the loss, it’s a fast way to 99. Now that the traditional Alching method is done, it’s time for the other ways!

Superheat Item is a good way to get magic xp and can be done really fast. 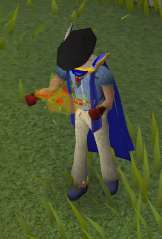 This spell uses 4 fire runes, 1 nature rune and the ores needed to make the bar you want to make. With this spell, you get magic xp, along with smithing xp. Now even thou you need a low magic level to cast the spell, you need the corresponding smithing level in order to cast the spell (level 1 for bronze, 85 for runite, etc). Now because you need the right ore for it, you can set up you inventory so that you have one ore over the superheat item spell, and you can cast away. The good part about this spell is that the spell will go in order of the ore in your inventory. By that I mean that if you have the ore in the fifth spot, when you cast the spell, the ore in the first spot (if the ore needed to make the bar is in the first spot) will get smelted, then the next one, and the next one, etc. So you can set it up that you can do ‘x’ amount of casts, bank, while not banking that one ore, and carry on. If you get good enough, you can actually go VERY fast. Now most of the low level bars don’t make you any money, some of the higher level bars can. This page on the Runescape Wiki shows what makes money, and what loses money.

High alch and Superheat item are really the two biggest ways on the standard spellbook to level up magic fast. If you want money as you gain magic xp, the Mage Training Arena might be something for you. 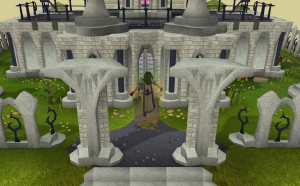 Mage Book’s and Master Wands are what you can get from here, along with battlestaves. Inside of the Mage Training arena where are 4 rooms, and each room has something different to train by. Low and high alchemy, Telekinetic grab, any level of Jewellery enchanting and Bone to Peaches or Bananas. You will get a fair amount of xp, nothing like what High alchemy and Superheat item alone can get, but in the end, you get money for better casts, which can be worth it in the long shot.

Plank make is the spell I used to get 99 so I’ll start with that spell.

2 astrals, 1 nature, 15 earths and enough coins to plank the correct log and your set. A mud, earth or lava staff will cover the cost of the earth runes so that leaves 25 spots in your inventory to have the type of log you want to plank (Normal, Oak, Teak and Mahogany are the only logs you can plank). This spell, if done right, and without talking, can bring in 230k magic xp per hour, that’s right, 230k PER HOUR! This is some of the fastest xp in the game for magic. This is just like Superheat item how it is cast. With Plank Make, you can go as fast as you want, well, as fast as your internet will allow you. 😉 You need to click on each log in order for the spell to cast, but you are able to queue the spell, so it can get quite fast. This spell is very useful for getting 99 Magic, but there are ways with plank make to actually make money. So this spell isn’t just a money drainer like some other spells. String Jewellery on the other hand… can drain a fair amount of cash, and some of the items needed can be hard to get. 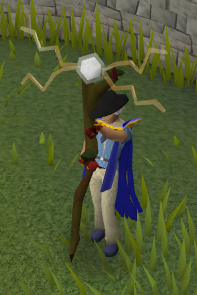 You need 2 astrals, 10 earth and 5 water. No cash for this one. You get magic xp and crafting xp for this spell, so if you have a low crafting, this might be a spell that you will want to cast. You can get a lot of xp with this spell. All you need to do is click on the spell icon, click on an UNSTRUNG amulet (gold, holy, etc) and it will auto cast the 27 (this is if you have a mud staff) unstrung amulets, stringing them. Now the amulet unstrung and strung are the same price so you can’t really make any money off of these this spell (to my knowledge). This is a spell if you have a lot of money to spend and you want some fast magic levels.

Humidify is another spell that can make you money. 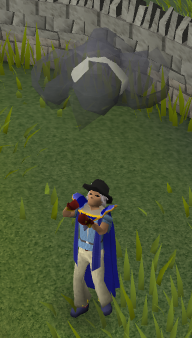 1 astral, 3 water and 1 fire and something to put water in. I’ve seen people use this spell to fill vials as you only use a couple of runes to fill 26 (27 if you use a steam staff) vials, and that makes you a fair amount of money. I have also seen humidify used as a power training spell, get 2 fishbowls, put one where the humidify spell is, then the other one below it, then fill your inventory with some random thing you have that will fill the rest of the spaces. You go to the spell tab, cast humidify, then use F1 to go to your inventory, click to dump the water out of your fishbowl, go back to your magic tab, F4 and cast Humidify again, and repeat. That’s it to Humidify. You only get magic xp so this is really used for getting money from filling vials with water.

In the ancient spellbook, the only spells that are normally used for power leveling are Ice Burst and Ice Barrage. Along with Blood Burst and Blood Barrage. These spells bring in the most xp per hour due to the fact you can hit up to 9 people (if they each take up one square, if they can stack, the amount of people is endless)! They take a lot of runes for most people don’t use it to just play around, they use the runes to get the most xp possible. 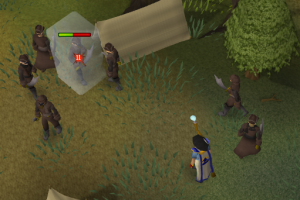 The places I see this spell used is at Castle wars, Mummies in the Chaos tunnels and Rock Lobsters on Waterbirth’s dungeon. Blood barrage and burst are brought into the picture to heal yourself, so when you go to mummies, rock lobsters or castle wars, healing can be important so that spell is worth it. This path of getting magic xp is more for the people who want to get charms for 99 Summoning (Rock Lobsters) or Hitpoints and Magic xp (Mummies). Castle wars is really just for fun and getting the armor at the end.

That’s it for this article. I’m not sure what next months article is going to be, but it is going to be a skill of some sort. If the new skill comes out before my article is due, I’ll try out the new skill and see if I can find some different ways to get to 99 (or a high level around that time). This is all I have for today, I’ll type for you all later. 😉 Tim Out! 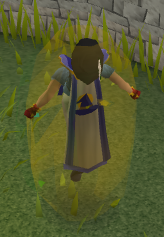