The Temple at Senntisten can be started by speaking to Ali the Wise at his home in Nardah and needs the following stat to start:

You also need to have the follow quests done in order to start the quest:

Cool and New Things with This Quest

The Temple at Senntisten is the 160th quest Jagex has released.

It is the 4th quest in the Mysteries of the Mahjarrat quest series, behind The Curse of Arrav.

On the day of the release, a new font was released, it is used when you talk or are withdrawing items from your bank. It is not changed when you are typing something to talk, look at something in your inventory, etc. Jagex tried this a few months ago, and they reverted it back due to the numerous player rants about it.

If you look at the drawing on the left and the right side of the Runescape website, you will see Zaros fall, and Zamorak wielding the Armadyl Staff.

On the day of release there was a spelling mistake when Azzanadra spoke of “deperate adventurers passing through”.

The player says to Dr Nabanik ‘Dr. Nabanik, I presume?’. This is a play on the famous quote ‘Dr. Livingstone, I presume?’ by Henry Morton Stanley.

On the day of release, if you have not unlocked the music track “Bounty Hunter Level 3” you will do so when you enter the cave through operating the winch. This is possibly a glitch.

On the day of release there was an unannounced update to POH bookcases giving them menus similar to those costume room cases and boxes. Bookcase menus however are a lot more detailed. Making the Ancient Hymnal the first book added under this update.

Now, for a review of the Quest

Do you all remember Azzanadra from Desert Treasure? Well, if you don’t, it’s alright. I forgot about him as well, but he is making a return in Jagex’s latest quest. Ali the Wise has been talking with one of his ‘old friends’ and he wants you to go and talk to him. Take Ali’s spare Digsite necklace and teleport to the Digsite to go and talk to Ali’s old friend.

Run down to the Exam Center and find Dr. Nabanik outside. After a somewhat brief talk, he tells you that he wants you to talk to the Archaeologist Expert in the Exam Center and get him a Restoration certificate. Go in and do all you to get Dr. Nabanik a Restoration certificate. Return to him and he will reveal that he is Azzandra and needs your help in restoring the alter beneath the Digsite. You will recall you need a rope to get down and Azzandra will give you one and tell you he will meet you down in the temple.

There are some Digsite workers working away with Dr. Nabanik (now called Azzanadra) will be standing in the middle, waiting to be talked to. He tells you how he wants you to get him two required items. A Barrows Icon, which can be obtained be killing all six Barrows brothers, then looting their chest. And a Frostenhorn, which can be obtained from a cold fortress in the north. In order for you to be able to get either of these items, you MUST talk to Azzandra about each mission, or else neither item will become available to obtain. It doesn’t matter which you get first, but the Barrows Icon is the easiest to get.

Kill all the brothers, that’s it. No hidden attachments, no extra tasks down there. Just kill the brothers, get the icon, and get back to Azzandra. Once you get the icon, return to Azzandra. He will tell you that the icon is able to store the power of prayer, and has become extremely powerful while at the Barrows area. Its increase in power is due to the large number of adventurers who has died fighting in the Barrows, and whose dying prayers have been captured by the icon. Now, after that icon is gone, your prayer will never be drained from the Barrows minigame. You can keep your prayer and now risk having it gone when you have Dharok as your tunnel.

The Frostenhorn on the other hand, is a little harder to get to. West of the Frozen Waste Plateau is a fortress, the Ghorrock fortress. With the temple being named the Ghorrock fortress, the level 96 ancient magic teleport now makes sense for teleporting out there. Before you go out there, Azzandra should have given you a backpack. Inside the backpack is a Heat Globe, YOU NEED THAT TO EVEN GET INTO THE TEMPLE! When you get to the Frozen Waste Plateau, you will bee a big piece of ice, and a pedestal. Place the heat globe (you will get others) on the pedestal and squeeze through. There are Iron Dragons, Steel Dragons, Waterfiends and Icefiends (waterfiends and icefiends are inside the temple, now outside) behind that ice so be careful and ready. Now to make it more of a puzzle I am not going to explain the puzzle and how to solve it. But after you have gone around the temple (inside, not outside where the dragons are) you will get to a point where you will encounter an Ice Demon. The Ice Demon is on the level before the ground floor and you get to him after going up the ladder on the South East side of the Bottom most level in the Temple. Use Protect for Magic as his magic attacks are very strong. He used Ranged and Magic so bring high ranged armour and is weak to crush and stab attacks. He will drop the Frostenhorn and you are now able to leave the Ghorrock temple via any type of teleport, as that area is labelled as not in the wilderness.

Back at Azzandra, he thanks you get getting it and you get to see the finished temple.

Until you, none of the people he has sent have been able to get it. But it’s not over yet, there is still one more thing he needs you to get, but luckily, he has already sent someone to get it, and they are waiting outside by the winch you use to get down to the temple. A ninja, but not only a simple ninja, but the ninja that stole the Relic from Entrana in Devious Minds. After a talk with him, go back and talk to Azzandra. You will see a cut scene with Zaros making his first ever chatbox appearance. After that, you finish the quest. 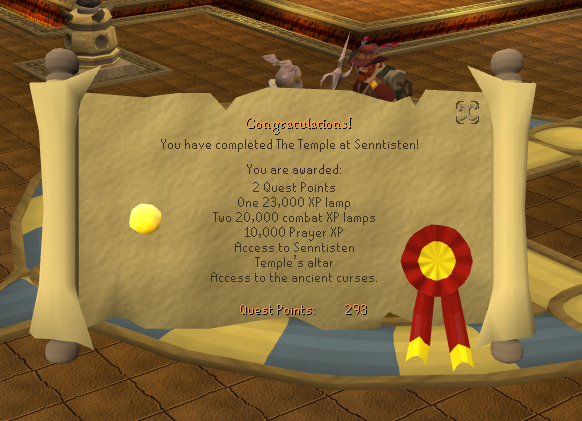 This quest was a very fun quest to do. The puzzle was a lot of fun and getting to find out about old things is very nice. The new prayers are awesome and will come in handy at slayer tasks, and make people want to get 95 prayer to use Turmoil. Not sure where the quest line is going to go from here, but it’s going to go somewhere, this is a fun and interesting quest line. Good job Mod Roderick I really liked this quest. All I have for now, Tim Out!