A Surge in the Right Direction

This week Jagex added 4 new elemental “surge” spells and tweaked both the extreme and normal magic potions. Causing some wonder if Jagex just creates some of these updates as filler… and some herbalists to go rejoice in having the upper-hand in pvp mini-games.

Let’s start out with the high level magic update for the regular spell book; the 4 new surge spells. These require level 81 for wind surge, 85 for water surge, earth surge is at 90, and 95 for fire surge. They require 1 blood, 1 death and 7 respective elemental runes to cast (+7 air runes for water, earth, and fire surge). Now the first question that springs in to my mind is; why? What is the point of these spells? Are they some weak attempt at making the normal spell book viable for PK’ing? To try and oust ancients as the spell book of choice in Pvp worlds? If so, it’s a feeble attempt if you count out the surge spells being slightly less expensive. Jagex readily told us the maximum hit for Fire Surge, with the +10% staff bonus and an extreme magic potion, is 37 on the news page. That is it, a flat damage spell, no special effect. Now to make a quick comparison, Ice Barrage (ancient spell book, 94 magic to cast) cast with the same bonuses has a maximum hit of 39. Plus the snaring effect that makes it such a widely used spell in Pvp. For another example, ice blitz cast with a staff and extreme magic potion has a maximum hit of 34 and the snare, making it slightly weaker than fire surge damage wise but at least on par due to its added effect. 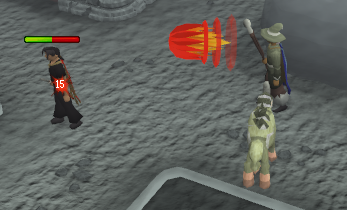 Now if Jagex wanted these new spells to at least compete with ancients, they should have created them with some special effect. The most outstanding option in my mind would give each of the surge spells the elemental effect that would happen in real life possibly. Fire surge for example would have the effects of dragon fire damage. As for the air, water and earth, it could be like being in a tornado, flood, rock slide, for the respective spell and doing the damage as Jagex sees fit. This would give magic the effect of something like pearl bolts (e) except magic will have the effects of all elements and be more common. In testing these spells out, I can say these have potential. Just not in the current pvp situation where Ancient Magicks have the floor.

As for potions one can only assume this is their promised strengthening of magic within in the combat triangle, and if it’s… well they seem to have contradicted their own words. Before the normal magic potion would only boost 3 levels, it now boosts 5, whereas the extreme magic potion would boost anywhere from 5-26 depending on level, it now boosts 7. The important change to note however is that any boosted magic stat now gets an extra 3% damage per boosted level, so an extreme potion gives an extra 21% damage and a normal potion gives 15%. This effect stacks with the +10% bonus from wielding certain staves. This is actually a nerf compared to the maximum hits using the old extreme potion, with a maximum level boost of 26, the damage boost magic received was 40%, this was sustained, where as the new extreme magic potion boosts for a maximum of 21% damage which beings to depreciate after a minute. For example, this reduces the maximum hit of Ice Barrage from 46 with the old potion and staff boost, to 39 with the new potion and a staff boost. If you consider that it will only be possible to achieve this maximum hit for the first minute after you drink your extreme magic potion, it is even more of a nerf. Just hope this means this leaves room for new spells to possibly do more damage instead of just pouring it into a potion.

So what’s the verdict? Well… Magic just still seems to be that 2nd-hand skill to add assistance to the skill your PVP’ing with. Be it freezing your opponent to keep them in place while doing damage to them, or giving the final blow a taste of vengeance!

This article is filed under PvP, Runescape. You can follow any responses to this entry through the RSS 2.0 feed. Both comments and pings are currently closed.