Within the Light can be started by speaking to Arianwyn in Lletya and needs these stats to start:

You also need to have the follow quests done in order to start the quest:
Mourning’s End Part II: The Temple of the Light

4 years later and Thurgel needs some help seeing there is a threat to the temple of lights security.

Something’s going to go down

And, like normal, you’re sent to figure it out, or so you think…

Now because Arianwyn is an elf, you need to go in with a blank elf crystal and set up a spot that Arianwyn can teleport to and not be attacked. He will teach you the art of enchanting teleport crystals, but you can’t recharge your own teleport crystals yet, and send you off to help him get there. He comes with a fully charged crystal bow and is ready to protect you as you bring him to Thurgel. Hitting 15 on each shadow, getting to the death alter is no trouble at all. After a long talk, and being able to argue any longer, you are sent to search the Strange Pillar that the red light goes into to become White light, to open the area to get to the death alter and Thurgel. After you have some sort of connection, you think the crystal trinket will do something, you hit the pillar with the trinket and a big flash appears, thus meaning Arianwyn should know something about it, and he suggests that you should go jump onto the death alter and absorb the maximum power so you can see what will really happen when you touch the Pillar again. 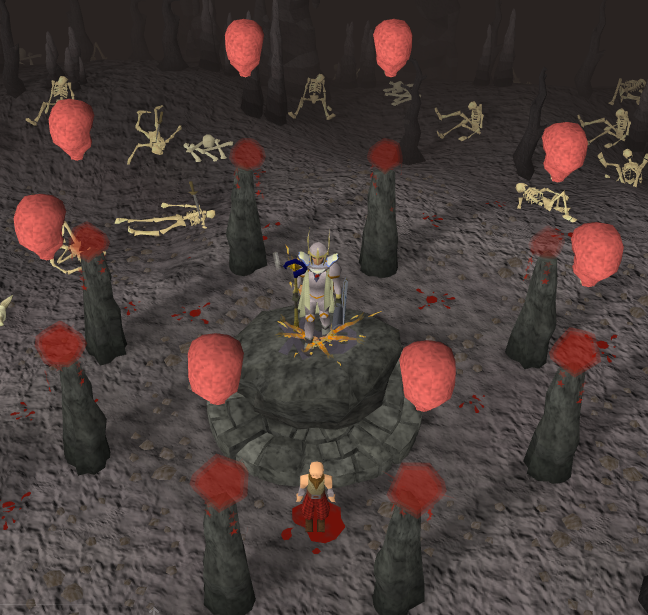 The Power of the Death Alter is in your hands

You will now have the crystal trinket circling around you and particles filling up the space the crystal trinket isn’t it. Now remember where you got the crystal trinket from, well you need to go back there to get more energy to help you activate the pillar, once you investigate the crystal, run back down (seeing you won’t keep the death alters power for ever) and touch the pillar and off you do to the entrance to the Corridor of Light. When you go in, you’ll see a blue light coming out of the wall, 2 light emitters that aren’t activated and 4 receivers, with one receiver blue. Clear your inventory so you have 4 open spots and search the dead slaves’ body to get a hatchet, a knife, colour wheel and a set of noted. As you can expect you need to bring the blue light into the receiver to activate something, so do that and in the end, after everything is done, you’ll get something like this. 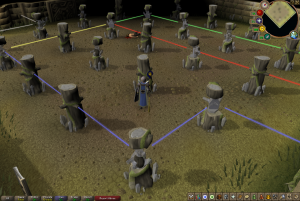 After you put the last beam in, a ladder will drop down from the sky, so climb up that and your now above where you just were and you are now in the maze of pain. There are spike traps that damage you 10 each time you get hit, as well as a long road to get to the Crystal Ballista. To jump from platform to platform, click on the gap between each platform and you will jump, make sure you don’t jump into a trap or else you will get hurt. After navigating the maze, you will need to shoot the Crystal Ballista at the moving target, after you hit it, rumbling from below will occur and you will need to go all the way back and look to see what happened. 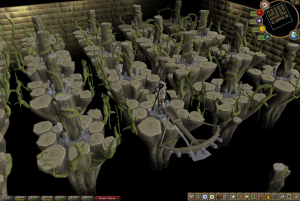 After the long road back, you will see that the large door has moved and you can go into the Corridor of Light. Half of the Corridor will be collapsed and a messenger elf will be crushed under the rubble. Search the elf messenger and you will find a report, the Prifddinas report. Return to the death alter to find out that Arianwyn has gone back to Lletya, so head back there and show him the report. He can’t believe his eyes, he has finally as well as you have finally found out what is behind the crystal walls of Prifddinas. He tells you that he is going to tell Thurgel to get some dwarves and power them up like you so they can clear the Corridor of Light so you can get into Prifddinas later on. After the end of the talk, quest number 8 in the Plague series is done, only to set up yet another quest that will hopefully bring us finally into the city of Prifddinas. 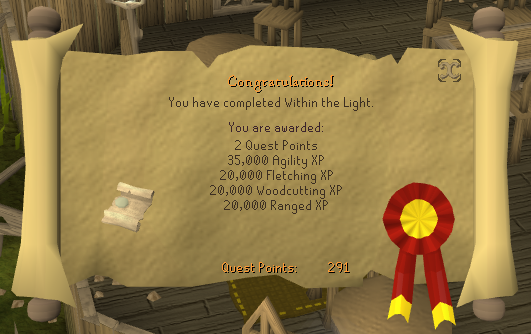 This quest was a very fun quest to do. The puzzles were a lot of fun, along with the length, a nice and easy quest are the ones I like the most, and after you do this quest, you will see why. Even after 4 years the quest series lives on and is showing that the next quest might hopefully open up the crystal city of Prifddinas. Good job Mod Chris L, and everyone else at Jagex that helped with the quest, it was a fun one to do. All I have for now, Tim Out!