Alex’s Analysis – Halloween at its Finest?

Well, I’m not going to bore you with words, especially on something that’s supposedly supposed to be fun, so instead I’ll make it fun with this!

The quest guide told by DEX!

Oh my word, the black demon-eye-skin blanket you promised me had BETTER be worth this …

It will be. It’s some of the most comfortable material in possible existence!

And, how many demon eyeballs do you need to gouge out-

Just worry about the quest guide. Nothing else.

Huh. Fine. But- hey! Remember I like my blankets dyed purple. DARK purple! NONE OF THAT ANNOYING YELLOW-

THE MINI-QUEST … TOLD BY DEX

OK, humans, you want me to tell you how to get through the purposely easiest type of quest imaginable – holiday events. I don’t know if that says something more about me or you, but I’m not one to disappoint the mental. Here we go.

First, you start off by walking south of Falador until you get to this black hole just floating there without any sign of origin or promise. The closer you get to it, the darker it gets. It’s an optical illusion; nothing more.

Brave or downright foolish, jump into the portal and you’ll emerge at Death’s house. Him and I don’t exactly see eye to eye, so don’t let him know I’m guiding you through this. Walk over to the old geezer and have a chat with him, and be polite, or he’ll punch your soul out. Literally.

Anyways, the lazy bum will tell you to get a spider out of his bathtub, since he can’t do it himself due to the fact that he kills everything he touches. I’d tell him to just wear a pair of gloves, but would he ever listen to me? Lacking servants (apparently he can kill skeletons by touching them too), you are entrusted with the deed. Go upstairs, into his bedroom, then into the bathroom. Can’t miss it, since it has a yellow dot on the mini-map.

Turns out the “spider” is actually 4 feet long and weighs a couple tons. Talk with him, abuse him, do whatever (I like his character), and eventually you’ll learn that he’s sitting there under orders of the spider queen. Return to the skinny shrimp with a hood and let him know. 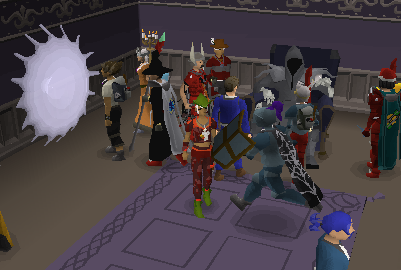 Of course, it was the work of the spider queen! How would he have ever guessed it? The black-robed goblin will then conveniently open a portal for you to go directly into the spider realm and chat with the queen. If you’re naturally scared of spiders, doom on you. 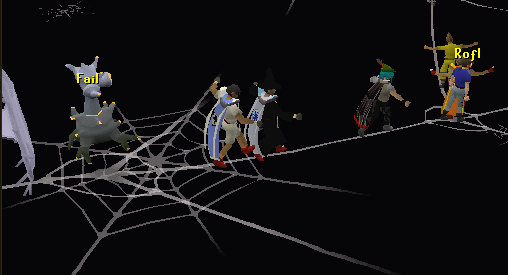 Now you’re in the web zone. It looks simple, but there are strands which you cannot walk on. With trial and error, navigate your way to the centre (don’t worry, there won’t be a point where you have to backtrack), and climb the ladder (do spiders really NEED ladders?) to the second floor. 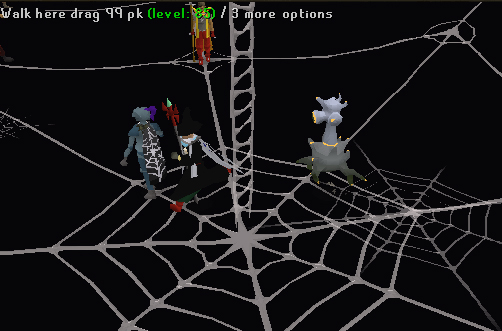 This time, it’s a literal maze. You can’t fall off here, but you don’t know where you’re going. Head up to the centre-north section by whatever means necessary, and climb the ladder. … well, go on! I’ll wait. I’m patient.

WHAT TOOK YOU SO LONG?!? … OK, you’re up the ladder, now you get to meet the spiders of the realm. Talk to the secretary and, despite how awkward it sounds, tell him you were sent by the bony b****** to talk with the queen. 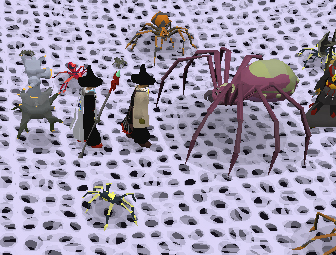 Of course, trusting Death like he’d trust his own legs, it will let you pass without even watching you. Climb the ladder, and you’ll be alone with the queen. Honestly, this would probably never happen in human society. Just goes to show you that spiders are officially better then humans. I mean, come on! If insects can build together a proper democratic system that appeases each and every-

OK, forget it, I’m going off-track. Talk to the queen (again, be polite and respectful, because you’re the exact size and shape as a morsel), and she’ll tell you that she sent the spider because the Reaping Rapscallion, dare I say it, CLEANED the cobwebs out of his house. Who DOES that? White dragons don’t even do that! She’ll say that she was offended by the gesture, and will tell- actually, wants YOU to tell the jerk that he needs to put them back. … easier said then done. 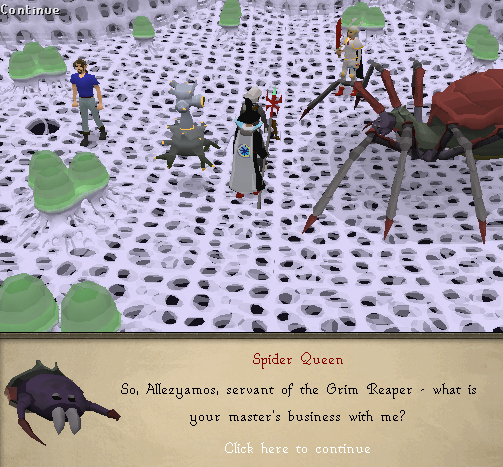 Anyways, go all the way back to his house (thank the Guardian for quick-jumps) and give the queens message to the calcium-deprived lunatic. He’ll then tell you “OK”, and then you have to go ALL THE WAY BACK to the queen to tell her “OK”. At least humans have the telephone system.

So, go ALL THE WAY BACK (my throat’s getting sore …) to the queen and, seeing as you lack the capabilities of the modern-day Spiderman, will assign you your own little spider, appropriately named “Eek”, to do the job for you. Now go ALL THE WAY BACK to the bozo’s house and get to work.

When you enter a room, Eek will tell you exactly how many things he wants to web. Seek them out by left-click options and click on specific items of furniture, from chairs, beds, and bookcases to foot lockers (seriously, who needs 4 footlockers all over the house?) and candlesticks (a fire hazard just waiting to happen, but it’s not like I care).

Of course, there’s a minor obstacle in the shape of a skeletal dog. He won’t let you web the room up and the lazy twit won’t tell it to heel, so you’ll have to appease it on your own. Entertain it about 50 times (or three, depending on how psychotic you are), and then show Eek to it, and it will allow you to spray silk all over its territory. Trust me, I may not be of the species, but I can tell you right now it really doesn’t work like that.

So, go all around the house, spraying furniture like you would a rant about this silly update. Don’t worry about ammo, the little guy apparently can store 60 cubed feet worth of silk in its half-inch wide torso. Once you finish, return to the scythe-wielding snob and let him know. Then, go ALL THE WAY- I’ll stop that now. Go back to the Spider Queen, and she’ll reward you with a brand new Halloween cape and you get to keep your Hammerspaced spider (shame you can’t spray players now). 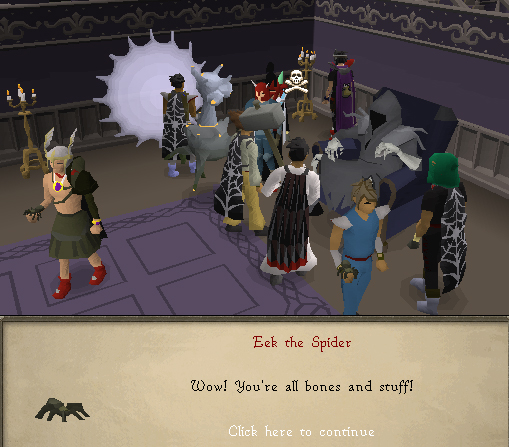 Then, get outta there, leave the place forever, and feel blooming’ proud of yourself. Done.

I’m a spirit of my word, I’ll have you know.

Under the circumstances, I would call this cruel, brutal, and downright disgusting. But that’s just the way I like it. Thanks!

Well, I’m disappointed. I’ll bet that goes for the majority of everybody. This wasn’t much of a Halloween event as it was a post-apocalyptic variation of the holiday where the only things left alive are giant, talking arachnids and the grim reaper himself who all see the event as a mere sit-through tradition of decor and civility.

So, just to get it out of the way, let’s start off with the positive stuff.

We got to meet Death. Again. We got to do him a favour. Again. We got to trash his house by throwing spider webs onto his furniture, which in fact, is 85% the same as throwing toilet paper everywhere. Unfortunately, he was grateful for it. You got to meet the largest spider Runescape has conjured up to date and, quite literally, converse with it. Lastly, and I apologize for the spoiler, but you get your very own, living, breathing, TALKING spider in the end. Anything to make my cat just that more jealous.

Still waiting for Death to pay back those favours. Doubt he ever will. Not until we die, anyways. Then what? Free gift box for eternity?

Now on to the fun, more expected, desired, and amusing stuff. The negative zone.

First off, there were no kids to scare. I get myself a living, breathing, TALKING spider, and there’s not a blooming’ kid to scare with it! Go to Lumbridge: empty. Varrock: empty. Falador: empty. Come ON! What kind of Halloween doesn’t involve scaring the mejebies out of somebody, especially since you get all these garbs to do it with? Especially those so innocent; so easily corrupted?

Next, no emote. No new emote. Isn’t it like a tradition that we get a new emote for every holiday event? We have “scare”, “zombie hand”, and “trick”, we have “snowman dance” and “freeze”, and we have “bunny hop” and “around the world”. All of which came from holiday events! Is that where it all ends? Please tell me this isn’t so! We love our emotes! Where’s the holiday festivities if we can’t express our gratitude with a carefully coordinated group-dance of something never seen before?

Third, the reward. … a cape with a web on it. Yeah, really scary. If there was an actual spider crawling around on it or the cape itself was transparent save for the strands, THEN I probably would’ve shaken a hand or two at Jagex Studios for that idea. But no, just a black cape with a white web design that Spiderman no doubt could improve on. You can’t even operate it (having a big giant spider on it WOULD’VE made a pretty cool emote, too …). Probably would go well with the skeleton halloween outfit, but- … actually, hang on. 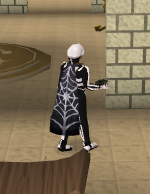 At least you get a spider. Now you have something to keep the zombie head in your Toybox company. It comes with an emote and a cute personality. not to mention you can wield it and punch stuff with it! … well, actually it crawls up your hand as you punch. Would be kinda neat if it dealt a second strike and poisoned an enemy. No matter, it’s the character I like.

But, nevertheless, spend a couple of days with it, listen to all it has to say, and you’ll never see- actually, wait, it sounds more dramatic this way: it will never see YOU again. … unless you’re crazy. Really crazy. Like some people I know … whom of which will remain nameless …

Fourth … it wasn’t really even scary. And I had high-detail on and everything. Well, if you have a fear of spiders, then meeting the queen for the first time as it instantly pops up on-screen might’ve done something to your internal nervous system. But nevertheless, I felt a bit deprived of all the potential spookers that could’ve been pulled off in 5 minutes worth of coding.

Lastly, and I think this one comes as a no-brainer. NO CANDY! WHAAAAAAT?!? Somebody go over there and scream from inside their public restrooms or something. Scare some sense into them. HOW do you have Halloween without CANDY?!? IMPOSSIBLE!

Of course, I have no doubt that after this article is posted, Jagex will update Runescape again, decor the place up, and appease each and every one of these demands subconsciously. In fact, I would be very surprised if they didn’t.