Ever wanted to keep track of how close percentage-wise you are to a certain goal? 99 Fishing, hitpoints or strength? Or perhaps you want to keep track of your progresss while doing Desert Treasure? Maybe you just want something random to work towards. All of these can be accomplished using the new Objectives System. 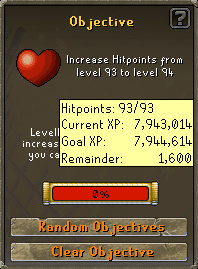 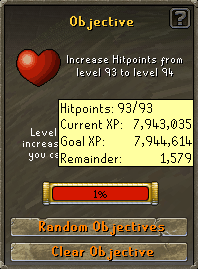 ) near the Friend’s list button. Clicking the ‘Random Objective’ button will put up a screen that allows you to pick a random objective. Random objectives are picked determined by your skill levels and completed quests, as well as “a few other factors” (as Jagex says). 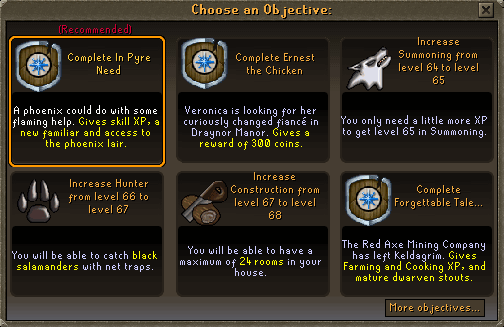 As you can see, 6 objectives will appear, usually being 3 quests and 3 skills. Most of the time for me it wants me to do a quest. But since I’m not a big quester I don’t listen to it. Increasing Summoning, Construction, or Hunter on the other hand would be good for me to do.

To set an objective of your choosing you can either go to your skills tab to set a skill objective or to your quest tab to set a quest objective. right-click on either the skill or quest of your choosing. If you chose a quest then it will switch over to your objectives list and show you you’re progress so far. Since you just started the objective it will read “Started”. If you chose a skill then it will put up a type-box in your chatbox. Type in whatever level you wish to reach and then hit enter. It will then switch to your objectives list and say you’re 0% of your way. As I mentioned earlier, Runescape objectives base their progress off of your current experience when you started the objective, unlike RSBandB’s which base if off of how much experience you have versus how much you need.

Will I ever use it? Maybe. Mostly for quests though. I like RSBandB’s goal signature’s better than Runescape’s Objective’s system. One positive part about the quest objectives would be if it told you how far through the quest you are(10%, 25% ‘You’re halfway done!‘, ‘Almost done!’). I haven’t tested this yet, but if it does work this way then it could be very useful when doing new quests which don’t have guides yet.

This change removes the Skill Tutors which used to be situated around Lumbridge. Instead of one tutor for each skill there’s now a few around Lumbridge that will give advice on a few things. If you find yourself stuck on a particular skill you can click the help button in the top-right corner of your interface. Clicking this will bring up a dialog like this: 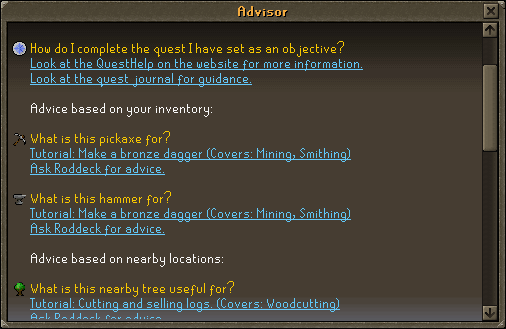 From here you can choose to ask for information about your current objective (in this case I had a quest as an objective), about items in your inventory, or about many other things. Almost every question has an ‘Ask Roddeck for advice.’ option. Doing so will bring up a chat dialog with a straight answer to your question from a man named Roddeck.

You can also choose to do a tutorial about a certain task. To see how it worked I was tutored on how to Mine and Smith. 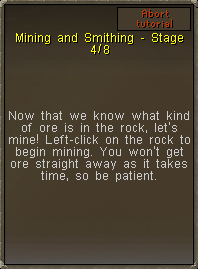 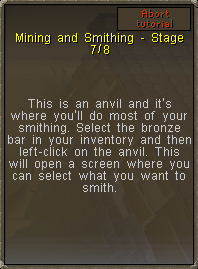 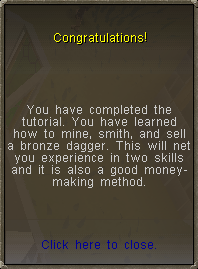 Now I do disagree about a few things (Copper and Tin takes a long time to mine at 74 Mining, and they had me go to the anvil behind Varrock East bank, I would’ve chosen west bank but oh well, and how many people do you know mine tin and copper to smelt and smith into bronze daggers to sell for money?), but that’s just me. For new players I can see how these tutorials would be useful. I think it’s a good change and hopefully new players will turn to it to look for help before asking other players (not that I don’t like helping new players, but some ask the most basic of questions which this new system covers with a straight and easy answer).

Another thing that was added was free samples in some of the shops. 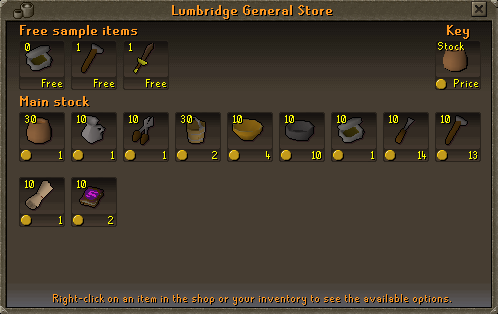 The old Tutors used to give items related to their skills when new players first talked to them, but since those tutors were removed Jagex had to make up for this by adding another means of receiving free basic items.

One more fairly large change they did in this update was denoting a specific part of the game as a ‘Starting Area’. This area covers Varrock, Lumbridge, and Draynor, and has been ‘made safer for new players’. Anyone with a total level of 60 or above will simply walk right past the guards that prevent anyone with a lower level from passing. Anyone with a total level lower than 60 will have to confirm they wish to leave the safe area. I don’t understand why it’s only 60, it’s extremely easy to get your first 60 total levels. 300 would be more reasonable since it doesn’t actually stop you, it just requires a confirmation if you’re below the requirement.

There were a few more minor changes this week also:
* As these mini tutorials are more interactive, they’ve rendered obsolete some previous features we had in Lumbridge for helping new players. These features had built up over the years and were making Lumbridge feel rather cluttered, so you’ll find that most of the Lumbridge tutors and the Lumbridge money making features have been removed from the game. The items which you could previously get for free from the tutors are now available as free samples from certain shops.
* The Air Altar’s location has moved to southwest of Varrock, next to the River Lum. It’s the same distance from Varrock’s west bank as it used to be from Falador’s east bank.
They did this so that players can do the Rune Mysteries quest and craft air runes without leaving the safe area. I don’t think it was needed and I honestly believe it’s just a waste but oh well.

* We’ve added a new fishing shop to Lumbridge.
* A new tanner has set up shop in southwest Varrock.
* A new pottery has been opened in Draynor Village.
* A new bridge has been built over the River Lum (near the Champions’ Guild).
This one makes alot of sense (sarcasm). If you look on the map you can see there is now a road going straight through the Cow field that leads to this new bridge. There is no gate on this bridge preventing the cows from leaving the field so it makes you wonder who owns those cows and who put the road in?

* Small changes have been made to some easy and beginner Achievement Diary tasks. Also, the “Craft 196 air runes simultaneously” task in the Falador Achievement Diary has changed to “Craft 140 mind runes simultaneously”.
* Woodcutting skillcapes can now be bought from Wilfred, who can be found among the trees north of Falador.
* Goblins and giant spiders now have slightly improved drop tables.
“They can now drop carved oak tables instead of normal wooden ones!”