That Odd Old Man that lives between Varrock and the Temple on the Salve needs help again. This time he wants to play a game of Hide, err, ‘Fur’ and Seek. Who’s going to be the seeker you ask? Well you of course!

To start ‘playing’ Fur ‘n’ Seek go to the OOM and ask him if he needs anymore help. He’ll say that the Varrock Museum wants to add a new Natural exhibit on the Fremennik province and they’ve asked him for help. 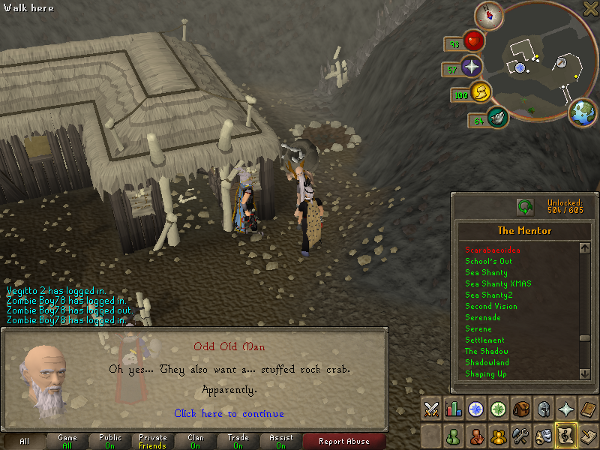 Aside from a ‘stuffed’ Rock Crab, they also need the hides of an Adult Black Unicorn, an Adult White Unicorn, a Grizzly Bear, a Fox, a Fenris wolf, a Hobgoblin, a Cave Crawler, and a Cockatrice. Fenris Wolves are actually just the level 64 Grey wolves that used to patrol the woods South-West of Rellekka. They still do, but now they have a shiny new name tag.

I hope you’ve brought an Amulet of Glory, because that’s the quickest way to get to Edgeville from the OOM’s house. A Varrock teleport tablet, 3 airs, 1 fire, and 1 law rune, or the Ancient magic homeport spell, any means of reaching the closest fairy ring really.

Once at a bank and fairy ring pick up 9 bags of salt (or buy from your friendly neighbourhood Slayer Master), 8 normal logs (or an axe and gather the logs along the way), a tinderbox, a Mirror Shield, and some armour and a weapon (unless you like kicking Bears bear footed), a Dramen staff, and a Varrock teleport or Digsite pendant.

Now that you’ve got your supplies you can go to the fairy ring and dial the Fairy Nice operator and ask for AJR or DJR. AJR will put you near the Slayer cave near the Fremennik province and DJR will put you west of Sinclair mansion. Either work, it just depends on which route you want to take.

If you called AJR then go into the slayer cave and kill a Cave Crawler. I didn’t get poisoned my them when I killed them but they can poison you if they hit for damage. Lower levelled characters may want to bring an Anti-poison potion.

Continue through the cave past the Rockslugs and equip your mirror shield and kill a Cockatrice. Now you can leave the cave.

After leaving the cave head west along the river and kill a Fox and an Adult White Unicorn, then go north and kill an Adult Grizzly Bear and an Adult Black Unicorn.

Now go south-west of Rellekka and kill a Fenris Wolf. These guys are level 64 so some players may need to range them or just use prayer or food.

After killing one go north into Rellekka past most of the town and to the north-eastern corner. Kill a Rockcrab and a Hobgoblin.

DJR will bring you to west of the Sinclair mansion and close to a level 64 Grey wolf. Though these wolves are what the Fenris wolves used to be they won’t drop a Fenris wolf hide, so don’t bother killing one.

Kill a Cave Crawler and a Cockatrice and then leave the cave and head west towards Rellekka. When you reach the crossroads going north into Rellekka and south towards Seers’ village go a little farther west and you’ll find the Fenris wolves. Again, becareful because these wolves can hurt characters with low defence and hitpoints.

Once you’ve killed a Fenris wolf go into Rellekka and into the north-west corner and kill a Hobgoblin and a Rockcrab.

Upon return to the OOM he tells you that these hides can’t be tanned by any ol’ tanner because normal tanners use harsh chemicals. So he asks you to do it.

Thankfully for you this tanning isn’t rocket science and can be done quite easily by rubbing some normal everyday slayer salt on the hides. 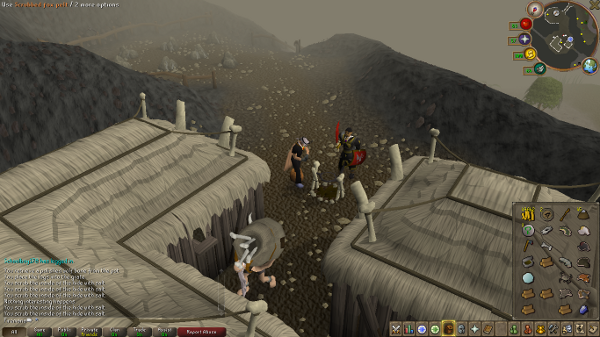 After rubbing the hides you’ll need to stretch them on the big bones(sorry, you can’t bury these) on the eastern side of his northern house and then light a fire to tan them. 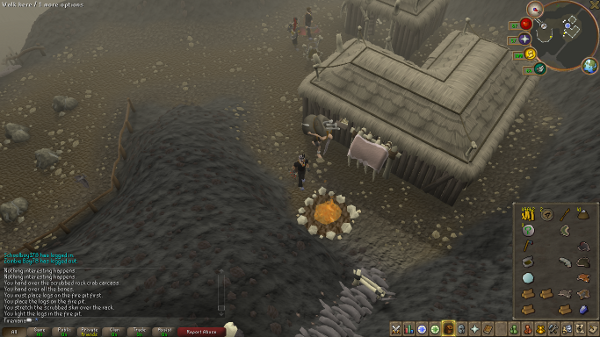 In a few seconds the fire will burn out and you can remove the hides. Once they’re all tanned talk to the OOM.

You might’ve noticed that you weren’t able to tan the Rockcrab hide…fur…carapace, which isn’t surprising really since it’s stone. The OOM’s sack seems to find this quite amusing (what’s in there anyways?).

After he takes the tanned hides and the carapace he’ll reward you. 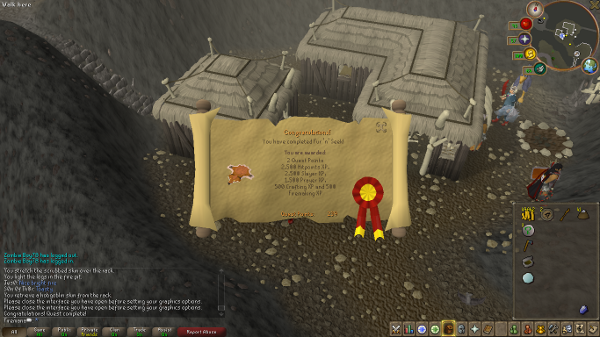 2 Quest points, 2,500 hitpoint, 2,500 slayer, 1,500 prayer, 500 crafting, and 500 firemaking experience is a pretty good reward considering it only takes half an hour to an hour depending on what quests and levels you have.

If you’re like me and like to do sub-quests then you’ll be happy to know that the OOM has a second wishlist of various items he wants. 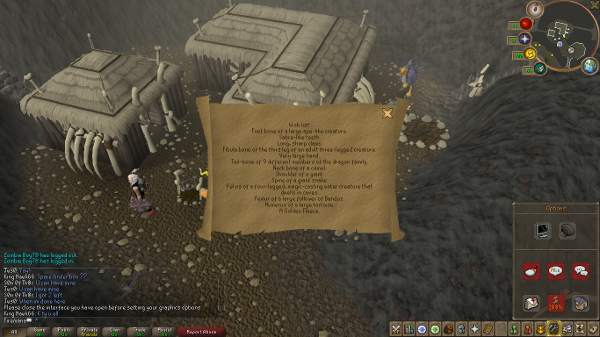 I’ve heard that if you collect them all there’s a special weekly reward. Unfortunately I haven’t collected them all yet, so I’m not quite sure what it is.