Call of Juarez: Bound in Blood

Call of Juarez: Bound In Blood is the prequel to Call of Juarez. It’s the sequel that’s a prequel if you know what I mean. It follows 2 brothers, Thomas and Ray, across the Wild West of the US as they murder a lot of people, plunder lots of houses and make lots of enemies. The game is an FPS (First Person Shooter for any of you who aren’t familiar with the term) and offers you the option to choose which brother to play as at the beginning of each level. Thomas is fast and agile, as well as being deadly accurate with a rifle at long range. He can also use his trusty lasso to access places his older, and slightly heavier, his brother Ray couldn’t. 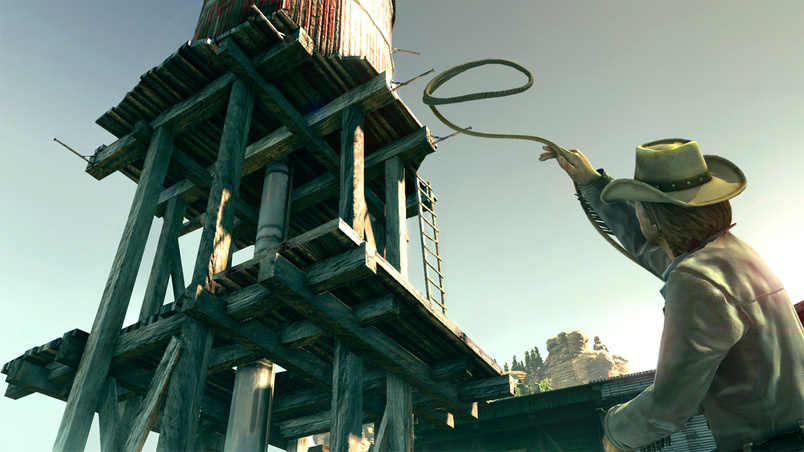 Meanwhile Ray is the tank, the bullet sponge, whatever you want to call it. He’s slower but can wield 2 revolvers at the same time, rendering him lethal at close range. His weight also means he’s a bit meatier in the muscle department, meaning he often uses brute force to gain entry to places he shouldn’t be. Accompanied by his dynamite he can cause lots of damage in a very small place.

The levels themselves all feature quite similar game play but they don’t get boring quickly. The levels are often broken up by showdowns (I’ll have more on those later) horse riding sections or things unique to the level such as fending off dynamite from your rickety mine cart. The levels usually take place high in the mountains, managing to make a rather barren area look extremely spectacular, a la Fallout 3. The way of gaining ammunition in the game is via boxes labelled (very imaginatively) ‘ammunition’ and off of fallen enemies. Ray can obtain dynamite from, another very imaginatively named box, ‘explosives’ boxes. 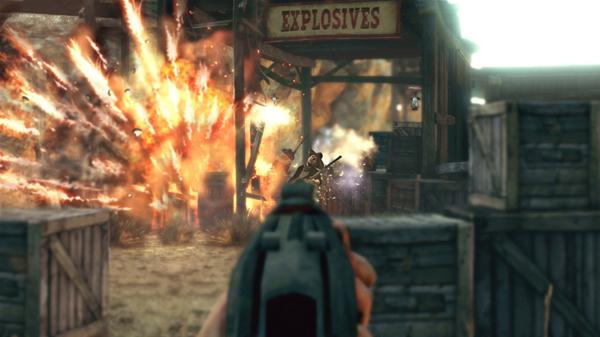 The guns in the game are split into 3 main tiers, which can be further classed into 4 sets according to prowess or effectiveness. There 3 tiers are Pistols, Shotguns and Rifles. There are a variety of pistols with fancy names like ‘quickshooter’ and ‘volcano gun’, that vary in power, reload speed and rate of fire. The shotguns are a lot more limited coming in only two forms, double barrelled and a sawn off version of the double barrelled. The sawn off is more powerful but isn’t as far reaching as its longer cousin. Last and certainly not least are the rifles. They come in two types. Normal rifles, which have similar names to the pistols as well as heavy rifles which come in scoped and iron sighted kinds.  These are probably the most effective weapons as you can use them without scoping in or by focussing in and headshotting someone faraway. All of these guns can be classified under 4 columns that describe the kind of power they possess. The worst is rusty which are the kind of gun you obtain at the very beginning of the game. The second is just the gun name i.e. ‘quickshooter’ or ‘sawn off shotgun’. The third is prime which are pretty strong and could easily get you through the game with ease. These kinds of guns also come in a nice shiny silver colour which looks really awesome with the games nice graphics. The 4th and best are supreme. These guns come in a lovely gold colour and really are supreme to anything else in the game, destroying most enemies with one or two hits. These guns are very overpowered and if you restart the game, you continue with them making any play through a ridiculously easy task.

The next aspect of the game that features commonly to break up the game play is showdowns. These are extremely cliché, featuring you and your enemy standing in a dusty street (or later in the game some very strange places) with your hands hovering tentatively over your guns, slowly circling each other. Awaiting the bell to signal the start of the showdown is a tense time and has you taking off your headset to listen for when the music dims, so you know the bell is imminent. The only frustrating thing is that while getting ready to line up your hand to the gun just before the bell goes, occasionally you move it too close. This prompts an automatic rejection, pushing you away from the gun which when it happens near the bell, can be fatal for your character. These showdowns are spoilt slightly by the dimming of the music before the bell as it is very noticeable with the volume up to an audible level. 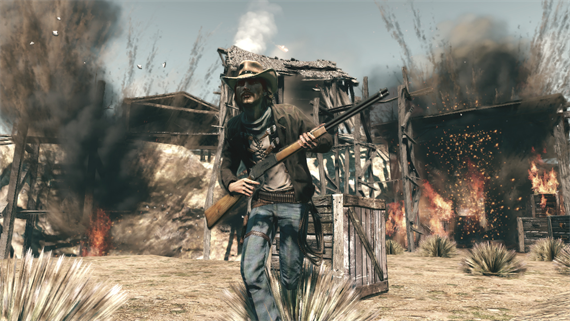 I do feel though, that there are missed opportunities in this game. For one, co-op for me is a very obvious choice for me. Although on one or two levels you are forced to play as just one character, on 90% of the levels you have the choice so it’s very strange as to why they didn’t include a co-op option. As well as this I feel that the inclusion of Native Indians in such a blatant way was a poor decision. I think the cliché ambushing Indians as well as the single scout running back to get his ‘whole tribe’. I think they should of included them in a different way such as the option to play as someone from an Indian tribe, fighting the McCalls. I suppose it is quite difficult to try and invent something new into an overused genre but maybe the developers should’ve searched high and low for something that would truly make the game stand out.

I don’t know whether this is actually a good game or whether my perception has been skewed by playing some particularly shocking games in recent week (Wolverine for example). I thoroughly enjoyed it, even though it took roughly 7 hours on medium difficulty. It was a nice break from the normal games that I play and I will continue over summer to experiment on new games and bring them to you in these articles. I hope you enjoyed reading this.