Well the tools for games aren’t specifically designed for PvP games, but because of all the changes I’ll be covering today I had to make the title interesting, don’t you think?

A new trader has moved into Al Kharid near Ali M and the Silk Trader. This new trader specializes in somewhat odd merchandise for Al Kharid, Game Tools! Whether your planning a race, trying to get a vote count, or just need a number between 1 and 12, Faruq has the item for you!

Dice Bag
Ever had trouble figuring out which number to choose? Faruq sells a bag of dice for 10gp that has all sorts of dice. 1d6, 2d6, 1d4, 1d8, 1d10, 1d12, 1d20, and percentile dice (2d10 with one die counting by tens and the other counting by ones). You can choose to roll the dice privately, in which only you will see the number, or you can roll them for the Clan, in which everyone in your clan chat will see the number. You must put the dice back in the bag before you can store it in the bank.

Almost an exact duplicate of the shaky eight balls you sometimes find in dollar stores, the Magic Skullball says random things from a list. It can say yes or no if told to give a yes/no answer, or it can say longer answers such as ‘Without a shadow of a doubt’ and ‘Nothing interesting would happen’ if told to give longer answers. It can also suggest minigames and colors if told to do so. This could be useful if a person can’t make up their mind or if a group can’t decide which event to do.

Ring of Seeking(Hide, Seek, Both)
Unfortunately I haven’t been able to test any of these yet but they sound like they’d tell you when a seeker or hider who’s in your clan chat is nearby. Could be great fun, maybe the EC will have a Hide and Seek event soon.

Marker Plant and seeds
This little packet of Marker seeds grows a special kind of plant almost anywhere in RuneScape. It’s used for parking a race course for clan races, leaving a trail for someone to follow, or just having fun. A normal plant can be planted or one that points north, north-east, north-west, south, south-east, south-west, east, west, or the direction that the player is currently facing. One nice thing about these seeds is that they’ll never run out, which is good since they’re the most expensive tool for games costing 65gp. Only the planter and Captains in the Clan chat can remove Marker plants. 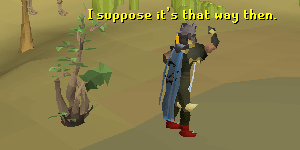 Ticker
One of my first thoughts when I tested this item was “Castle wars 1000!”. Every time a player clicks this ticker a ‘tick’ is recorded. Up to 1,000 ticks can be recorded and then it resets itself. If a player right clicks the ticker they can choose to read the ticks to themselves, reset the ticker, or read the ticks to the clan chat. The reason I thought this would be good for Castle Wars 1000 is because the CW system doesn’t give the kill count to the player who did the most damage, it gives it to the last player to hit. Every time one of our members swings and their opponent dies they could say ‘Tick’ in the clan chat and then the event leader would click the ticker to record the tick. At the end of the event the leader would read the ticks to the clan chat and we’d know how many people we actually killed. 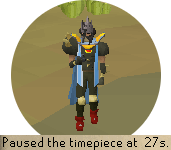 The Timepiece (AKA Stopwatch or Timer) is a great little do-dad that records a length of time in seconds. The first left click will stop the timer, the second will pause it. When right clicked the player can choose to reset it, pause it, and read the time to the clan chat. This timer can be used for multiple things aside from clan games. It can be used to record ore respawn timers, tree respawn times, item or monster respawn times, distance between to points by running/walking, and many other things. A possible new event could be ‘PC 30’, in which the team must try to take the portals down in 30 seconds or less (I was on a team once that did this). Could be an interesting and fun event if there was a good turn out.

Racing Boots
These are not only nice brown boots, they’re also great for making sure that nobody starts ahead of time during a race. When a clan member uses the Starting horn (as talked about below) all nearby clan members cannot move. Once the Master of Races (below) says to go all previously stopped members can now move.

This horn summons a cheeky little imp that goes by the name of ‘Master of Races’ who will tell all nearby members with Racing boots on to get ready, set, and go. When he’s initially summoned he’ll stop all nearby clan members who are wearing Racing boots. When he says to ‘Go!’ he’ll let them move again. This prevents false starts and cheating. This horn could also be used for skilling races, in which two or more players must gather a certain amount of resources.

Voting hats and Orb of Counting

Even though it wasn’t the purpose, these two hats do go well with Robes of Zamorak and Wizards’ robes, making them quite popular for red and blue outfits. Though I said hats that’s actually incorrect usage as there is only one hat. The hat, however, can be ‘turned out’ to change the color from red to blue. These different colors are used in conjunction with the Orb of Counting to take a vote. One player who has the orb would say something like “All reds for Castle Wars, all blues for Stealing Creation” and then they’d wait a few minutes while everyone changes and equips their hats and then they’d click on the orb and do a nearby count which will count all the players wearing each hat and then tell the orb holder how many of each color there are, how many aren’t wearing a hat, how many aren’t in range, how many aren’t on the same world, and which color won. Very useful for taking a vote easily, however all players must own a voting hat to do so.

Toolonomicon
As its name somewhat implies, the Toolonomicon is a small instruction book which tells you what each item is for and does.

Dice
The dice bag contains many kinds of die Use the bag to choose a die and then roll for yourself or for your clan. You must put the die away before you can place the bag in your bank.

Magic skullball
Foresees the future, suggests what to do today or recommends colours. The skullball can switch between types of answer, give an answer just for you, or announce an answer for your clan.

Voting Hat and Counting Orb
You can change the hat between red and blue. When your clan needs to make a decision, tell them which colour is which option and have them wearing the hats, then use the counting orb to find the results.

Rings of Seeking
These rings come in three forms: a seeking ring, a hiding ring and one ring that is both. A seeking ring alerts you when the hiding ring of a clan-mate is nearby; you will not be told who has the hiding ring – or how far away the ring is – as we’ve left out for you to work out. What manner of game can your clan come up with?

Racing boots and Starting Horn
Start your race in style with these well-designed running boots. The race will start a few moments after the starter blows the horn, and other clan members will not be able to start until the race is underway.

Marker Seeds
Seeds from the bag will grow to mark places, even point the way. The owner of a plant or captains from the same clan may remove it. Plants cannot be grown too close together, or too frequently.

Empty Bag Caller
Allows you to prove to your clan that you’re not wearing any equipment, carrying only the empty bag caller, or both. It does not prevent clan-members getting items after their announcement, so, if it’s important, remember to ask for new checks frequently.

Timepiece
Once started, it remembers how long it has been running. You can pause it, restart it, check the time for yourself or tell your clan. You must restart the timepiece before you can put it in your bank.

Ticker
Tick! This device can count whatever you want; just tick it, check the count whenever you like and announce it to your clan when you need to. You must reset the ticker before you put it in your bank.

Other things that were fixed broken done in this update:
You can once again walk out of Edgeville’s bank using the minimap when heading north-east!
This is thought to have been caused by the Wise Old Man drinking too many SGGs and eating too many Chocolate cakes while doing a transaction at the bank.

We’ve removed a small selection of items from the Grand Exchange to improve offer matching. For example, all but the fully charged and lowest charged versions of enchanted rings have been removed. The removed items can still be traded; they just no longer show up on the Grand Exchange.
I don’t really see how this helps anything, but I guess coding-wise it helped them.

Basically what they did was make it so that you can’t use the protect items prayer and are now always skulled when entering a PVP or Bounty Hunter world, even if they’re in a safe spot. You’re now guaranteed to lose every item. Also your victim will have had to have risked atleast 75k worth of items for your drop potential to be applied. 74,999 and your drop-potential won’t be applied. Also you must be in a safe zone before you’re allowed to log onto PVP or Bounty Hunter worlds.

Now there were of course some people who didn’t like this, and so they complained to Jagex and now you’re guaranteed to keep one item, regardless. No more, no less. This change was done yesterday, Friday the 17th. The good thing is that Jagex only did this to certain PVP and Bounty Hunter worlds, so if you still want to risk your Godsword or Dragon claws you can.

Navisite in Nevada wasn’t fulfilling their end of the contract…

We’d like to sincerely apologise for a number of worlds being down last night and this morning. This is due to Navisite, one of our ISPs in Nevada. We are deeply disappointed in the service we have received from Navisite during the course of our relationship, and will not only be seeking damages for this service outage, but will naturally be moving all of our services from Navisite to a better ISP.

We are working really hard to bring these worlds back online and we are making use of our other data centres around the world. Once again, our sincerest apologies for this disruption.

Though we never like to see worlds down, what I liked about this news post was the fact that Mark signed his name ‘Mark Gerhard‘ instead of ‘Mod Mark Gerhard‘ like all the other news posters.