An Extended Trial for Agility

Greetings, comrades! Welcome to the next generation of Agility: the Gnombarian Pro. This is the part where Jagex compliments its new modification on the run energy with two new, high-level programs. If you are anywhere from level one to sixty-nine, this update is little of concern to you unless you plan on going further in these extraordinary courses. Of course you’ll be see people flying around that are the more skilled Gumby’s in the pack, but it’d be nothing to worry about.

Now, where to begin? Oh, yes, the advancements. When I read the update first, I was shocked that the Gnome Stronghold and Barbarian Assault. These are only basic courses, so I would expect an update to the werewolf or maybe even the Ape Atoll course. However, the gnome course does seem pretty much like the Ape Atoll one as you have gigantic monkey bars and, rigorous jumps, and more climbing then ever before.

The barbarian course is also a little like the werewolf course. Instead of using the zip line, however, you get launched through a crossbow and balance on single plank as you reach to the depths of the earth. 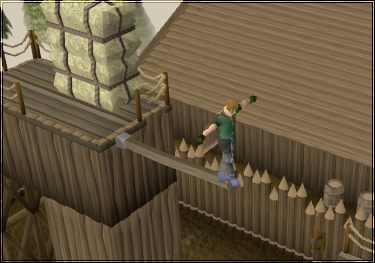 Anyway, as for experience, both are exceedingly decent. It’s about 60k from the gnome course and perhaps a little bit lower on Gunnjorn’s course. The main problem with them is the forced animations. These animations add to the time by an awful lot. If you don’t know, forced animations are where you have to wait entirely for the animation to stop before climbing on to the next obstacle. Other obstacle courses have this, but not as severe. For example, once you are done jumping off the monkey bars, your character will have their legs crouched slightly and have a few seconds of him/her straightening out his/her legs. Then you wait about half a second and can finally click to the next obstacle.

Which would I pick to train on? Personally, I would think that the Gnome Stronghold one is my best bet. Why? Because not only does it give you that small extra experience, but it isn’t failed at approximately level 88-90+ and its easier to click on the obstacles than Gunnjorn’s course. Of course, I don’t know exactly what level you stop failing them, but I believe that the barbarian course is approximately 93-95+ since the gnome has a five level interval as well.

The most astounding thing about the update is the rewards. If your one of those 4,670 (and counting) people that has level 90, you get the bonus option of getting agility legs and top that together, you receive negative 22 kilograms! Now add that to the spottier cape, penance gloves, and boots of lightness and abra kadabra, alakazahm! You get a whopping -35kg weight. Now of course this wouldn’t really help if you were to do something that required combat, but raising non-gear skills is extremely helpful. Now, because of this outburst of weightlessness, several people are confused on why it doesn’t affect the rate on how ‘slow’ your energy drops. The thing about weightlessness, according to Jaglumex’s theory, is that no matter how much negative weight you have on, it will only be based to 0 kilograms. So this means that you can have heavy items with you as long as your weight is zero or under, whilst still getting a slow energy drainage.

Finally, I’d like to tie up a loose end I made. So why is this not important to level 1 through 69 Agility humans? Well the new courses may be 85 and 90, but unfortunately, Jagex modified the existence of Dorgesh-Kaan. So for all you 70-79 humans, you have to try a different course until 80, because they made it harder but easier. You now require 80, but they made it so you fail less. So it is good for 80+ people, but if you’re in that range, then please hang up the phone and try again later.

So all in all, this is a remarkable update. It may not be important to most of you now, but if you ever want to raise your Agility to the tips of excellency, then these courses are your best bet. And if you think it’s a dumb skill, remember. Level 99 Agility is your best friend. It helps you out in your time of need in running. Happy Agili- err.. Dexteritizing!