The Geology of Runescape

Imagine Varrock underwater, or a mountain range so tall that it is impossible to cross. Some of these might happen, some already have. Runescape is an ever-changing world. The ground beneath the land is just as alive as the people and animals that live on it. The problem that faces anyone trying to study the geological past of Runescape is the lack of any documents written about the subject. I scoured all the libraries in Runescape to no avail. The only way to study the geologic history was to look at the landforms left behind.
We will first start by looking at the past. The past is rather unclear because no one went to the trouble of mapping this ancient world, but the fact that humans and other species are fairly new to this land could be one factor. However, I’ll try to talk about these events in the most chronological order that I can.

White Wolf Mountain, a staple of travel between the Asargnian and Kandarian kingdoms. But sometime in the past, this mountain didn’t exist. In fact, these two kingdoms very well may have been on separate islands!
As the Kandarian Plate advanced North, it hit the Asargnian plate. This caused the land at the fault to buckle and move upward, creating a mountain.

The island of Brimhaven is known for its iconic volcano. But in the past, this volcano was not there. The island may have not even been there at all, just Karamja, but that cannot be proven. Crandor would have been in the place where Brimhaven is now, moving ever so slowly over the hotspot that resides there, with magma oozing out and making the tiny island grow. As the plate kept moving, the island of Crandor moved past the hotspot and now lies as a dormant volcano. This means that in the future, a new volcano may spring up in the middle of Karamja as the plate progresses north.

One of my favorite things I studied was how Varrock was underwater. Now some of this is speculation, but it seems to fit decently. First off, there is a limestone mine just east of Varrock. Now, a little background information: the limestone rock forms when there is a shallow sea over the area, and the saturated mud is pressed into layers and buried over time. So this limestone mine shows that the area was once underwater. Since this area is exposed, it means that the higher layers that showed what happened to the water have been lost. My personal guess is that as the sea receded, it formed the River Salve. The river might have been what eroded away the easily recognizable canyon just east of Varrock. As the sea became shallower, it eventually became a runoff lake for the Salve. Now, it is possible that those monks who live between Varrock and Morytania dammed up the river with their monastery. This could have made the Varrock valley habitable, and the settlers used this very fertile land to grow crops and start a town. But the only question that arises is, where does this water from the Salve go? Are we on the verge of discovering a great underground lake? Possibly the existence of the Runescape water table?
Lets talk tectonics. Below is a map of how I believe the plates are positioned in Runescape. Now, these are just rough estimates of how these are positioned, but it all seems to fit. 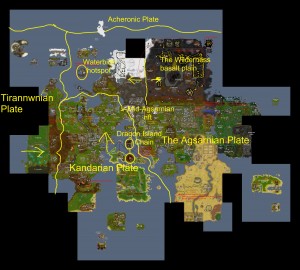 Several points of interest on this map should be looked at. The river that runs along the boundary between the Asargnian and Kandarian plate is one. This is what I believe is left of what may have been the mighty ocean that divided these two kingdoms. As the plates move closer together, this river will probably close up and form new mountains.

When people start thinking about tectonics in Runescape, The Wilderness undoubtedly comes to mind. This great expanse of black rock and bubbling lava can only be described as a basalt plane. Much like the islands of Hawaii, the molten magma sits just feet below the black basalt that adventurers battle upon every day. As this lava keeps flowing, we will probably see some new land expanding Northeast as the basaltic lava slides into the ocean. So sometime in the past, it can only be inferred the wilderness might have been a very green and lush land before the lava started flowing. A place full of people and animals going on their merry way, now it sits barren and empty, with sparse life living throughout it.

Everyone knows about Waterbirth Island’s distinct crescent shape. The Dagannoth creatures live in the cavern underneath which may be an ancient batholith, or magma chamber. This was, no doubt in my mind, a massive, explosive volcano. This island used to be circular, but the force of the explosion created a massive caldera, or crater, that blew away much of the island.

Now, for the meat and potatoes of the article. The big, bad, scary future! You may be wondering, “ya all this rock mumbo jumbo is good and all, but what will really change?” Well, it’s all about outlook. If you’re living in the now, not caring about what happens in the very distant future, then I will tell you nothing will change. But if you’re feeling adventurous, with even the slightest curiosity about what Runescape might look like millions of years into the future, then I can offer you a little peek about what may happen.
I spent countless hours reviewing all of this information, and drew up a Runescape of the future. 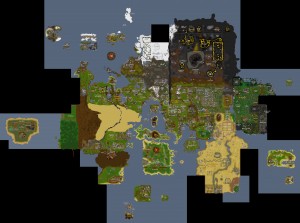 One of the most noticeable new landforms is the tall mountain range between the Kandarian Kingdom and the Asargnian Kingdom. No longer does a river flow through this area, now the White Wolf Mountains.

The dagonnoths have left Waterbirth Island, and the magma chamber has been refilled, Waterbirth has rebuilt itself into the classic circle shape. All rest uneasily as the rumblings of an impending eruption shake Runescape.

The elf land is very much more narrow now, as the Elven Mountain Range grows even taller. This has caused the forest here to become much more dense as the rainfall increases in this region. The city of Aradougne that once stood here is now part of a desert in the rain shadow of the Elven Mountains, for there is no rain to fall here anymore.

There is so much to be discovered about how tings used to be in Runescape. Ancient oceans, great mountains eroded by time. The actions of the past are the key to the future. Runescape will probably not be around long enough to see this future. But like a blank canvas, it is the artist’s job to envision what might be. The future I have painted today is my interpretation, what will yours be like?