My Call of Duty: World at War review

I got Call of Duty: World at War shortly after Christmas. I wasn’t expecting much as Call of Duty 4 had set the standards high. Call of Duty 4 brought modernisation to the already popular Call of Duty franchise. It is still a high standing game, multi-player wise, and the campaign itself was quite enjoyable. There are very few flaws in the way of graphics and mapping, and the new engine Infinity Ward made for it was suitable. As I played the World at War multiplayer beta, I seemed to lose faith in Treyarch and the game itself. It looked as if they had tried to copy Call of Duty 4, but dragged it through a dirt mound on the way. It was in no way as appealing, and didn’t look like it would stand up to the hype. But my judgements stayed skeptical until the game was actually released.

Because I got the game later than some people, I had heard various things about the game which left me even less sure about my judgement. People were telling me how good it is and how bad it is, and it just left me confused. I couldn’t make up my mind. However once I finally got to play the full game, I had made my mind up about it.

The single player campaign is a bit, disappointing. After first playing the whole story through, it seemed pretty good, as if it could rival the other games stories, but then I looked back. The storyline moved too fast, they both started off on the brink of death, and ended up becoming heroes. I understand that can happen, but the way it is set out is a bit far fetched. There are not enough missions in the game to cover the time, to at least make it seem like it didn’t all happen so easy. The US Marine’s missions were just “travel here”, “defend here”, and “assault this”. Killing things is fun, but there is no plot to it. The Russian missions had a storyline, which I followed well, and quite enjoyed, however the ending is extremely rushed and unrealistic. They just seem to waltz into the Reichstag and basically stick a finger up to the Germans, and they all fall down. The Russians had about 10-20 troops with them. I doubt that 20 troops are enough to storm the most important building in the country, especially with so many Axis defending it. So as far as the story went; it was fun at times, but no thanks.

Feeling a bit under the weather with Treyarch, I got to revisit my beta days in the multiplayer. And to my disbelief I was right. The online played exactly like Call of Duty 4, using the same engine, and kinda the same layout. However it most certainly wasn’t Call of Duty 4. This is where I start to become a bit fanboy-ish and compare the two games.

The maps of Call of Duty 4 were fairly large, and some were smaller. They were bright most of the time, and were built for every style of combat (apart from special cases). They were fairly easy to learn and explore, and there were never any areas scarce of life or combat. Yes, sometimes it got annoying when your spawn area got camped, but that rarely happens as the spawning system is spread out.

On Call of Duty: World at War, the maps are all large, wide open and try to spread combat out across the map, but fails at it. Combat is always concentrated into the same place. The maps all feel the same; there is nothing significant to each map. The spawning system seems to be worse than it was on Call of Duty 4, and you are more likely to spawn in a ridiculous place. There is also one more thing that is crucial. Glitches. There are so many glitches to get out of maps, under maps and gain an advantage over others. It was acceptable to start with as these could be patched up, but they haven’t! They’re still there and people use them too frequently, which really disturbs the game play.

CoD4 brought a big change to online game play, offering a wide range of guns, automatic and semi-automatic, different shapes and sizes, and even different camouflages. They all had good things about them, however few were overpowered and few were underpowered.

It seems the opposite on World at War. The guns are mainly semi-automatic rifles. There is a small selection of automatic guns, but these are all overpowered. I understand its World War II, and there weren’t many decent guns around then, but I’m sure they could’ve picked a few better guns, or at least evened out the power of them. 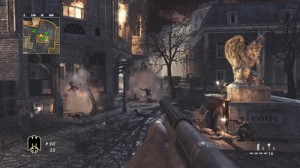 Perks were new to Call of Duty 4, and were new and exciting upgrades for our soldiers, giving us more health, more ammo, making us faster or even hiding us from the enemies UAV.

In Call of Duty: World at War, they basically took the perks from 4, and either renamed them or moulded them to the game, like protection from flares and tabin gas.

Compared to CoD4, World at War gameplay seems more mature. Even though they have the same engine, similar weapons and accessories and even the same sort of community, the whole feel of playing online seems less degrading at the cost of quite a bit of fun. It just does not seem as enjoyable, as it is just like playing Call of Duty 4 with different maps and guns. 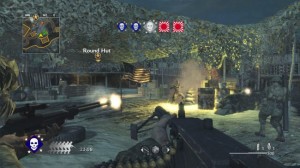 I was close to breaking point when I discovered a new level at the bottom of my campaign list; Nazi Zombies. I had played Horde mode on Gears of War 2 and they both take on the same perspective. Holding ground against onslaughts of enemies was quite enjoyable and rewarding. Nazi Zombies was no different.

I first played it with a group of 3 friends, which was probably the best way to start. It wasn’t long until I was hooked in, constantly trying to get past my previous record wave, in solo and multiplayer. I know it is also popular amongst the rest of the Call of Duty community. It was one smart move for Treyarch, they did a very good job of this minigame, and even though there were flaws and glitches, it is extremely enjoyable. The AI of the zombies is obviously of brain-dead standard, but the way they manoeuvre and their slouchy posture is artistic and very well done. They are indeed realistic, and so is their bloodthirsty attitude!

This left me satisfied with the game, to know that I had not entirely wasted my money. With a below-par campaign with a shallow, rushed storyline and a disappointing remake of a previous multiplayer game, which seems somewhat appealing to some people, it was a shambles until I found some light in co-operating with friends to tackle the horde of Nazi Zombies. Playing this mini-game has got me playing Call of Duty: World at War much more than I did before.