Everybody wants a change sometime in their life, some want it sooner than others. This time it’s the Easter Bunny. He says he’s getting to old and it’s time for him to retire. Unfortunately he can’t do that unless his son, Easter Bunny Jr., is willing to take over the business. He can’t seem to train his son, so he asks you to.

Now you could just ignore his pleas and go on your way fighting dragons, but then all the little childerkins in the world would hate you because they wouldn’t get anymore chocolate eggs.

Or you could accept the challenge of converting one of the most rudest, obnoxious, and lazy creatures that ever walked the face of Gielinor.

Accepting it of course.

Jolly good of you, now it’s time to cut the chit-chat and get to work converting that little rodent known as EB Jr. (Come to the Dark Side, we have Chocolate!).

First thing you’ll have to do after talking to EB Sr. is talk to his son. 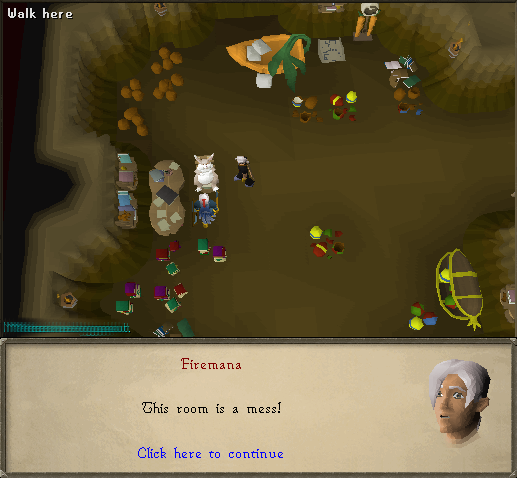 First thing you notice about this room is that it’s a mess, and that a fat faded pink bunny is reclining on a chair in the center back of this room. Turns out this little rodent is EB Jr.. Unfortunately he’s not much of the worker type, and he orders you around as if you were his slave. Eventually he’ll tell you that there’s a to-do list in his Dad’s office and that you should look at it. 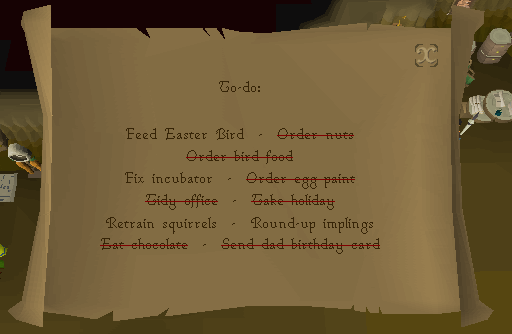 A list, great! Now if only we knew what those tasks involved…

First off, yes, frenatics is a word I just made up, secondly it’s time to feed the Easter Bird, who is located near the East wall of the main room.

Why yes, you didn’t honestly believe that the eggs came from the BUNNY, did you? 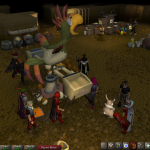 Apparently the Easter bird hasn’t been laying for quite awhile, for it has fallen to sleep. To wake it up you must startle it, and what better way to do that then to blow a raspberry! Of course any exciting emote would work, but I just chose to do a raspberry.

Once awake you can talk to it to find out what it needs. It says it’s hungry and will state what type of food it wants. There are four different types of feed, Cracker bits, Worm bits, Poppy seeds, and Sunflower seeds. What the bird wants is different for each character, for me it was Sunflower seeds. Of course it would be too easy if the Easter Bird said exactly what it wanted. Instead it says something like ‘Sun Seeds’ or the like when referring to other types of foods (My bird wanted Sun Seeds, but your’s might want something else). Once you’ve figured out what kind of food it wants go over to the food bags to the East and examine them. One of them will contain the food the Easter Bird wants. Take some food from this bag and put it in the feed hopper to the west of the Easter Bird.

After you’ve fed it you can talk to it again to find out that it must be watered also. This is a much easier task, and only requires you to run North to the water pump. Once you have a bucket of water put it in the water trough to the East side of the bird and you’re done.

Now EB Jr. will come near the Easter Bird and ask you what the use of it is. You must choose some appealing reason, which unfortunately might mean lying…

This is another time where Free to Plays can do something which normally they wouldn’t be able to do, Hunter. More precisely, Impling hunting.

There are 5 implings here. Check all of the tunnels here until you’ve caught all 5 of them. Once you have, walk to the painting machine near the South wall and use them on the machine (or activate the machine). Once you convince the imps that they need to work EB Jr. will appear again and start complaining about the Implings. Once you convince him that they’re cool you’ll be able to continue.

9000 versions and it STILL breaks, talk about craftsmanship…

EB Jr. will complain to you about an Impling that’s been complaining to him (there’s been alot of complaining going around, I think I should complain to Jagex about all the complaining NPCs) about the broken incubator and tells you to fix it. Of course being the civil minded adventurer that you are, you choose to fix the problem rather then fix EB Jr.’s head…

Go over to the incubator and talk to the workimpling there to find out what happened. He says that the last chocotrice that hatched went wild and broke the incubator and when the squirrels and implings got bored they stole the parts and hid them around the room. Of course you ask why he didn’t stop them…

Quite understandable really, well not really actually. The impling can fly and the squirrels can’t, hehe!

Search in the crates around the room and you’ll find a Chimney, Pistons, Cog, Wet pipe, Sooty pipe, and a Clean pipe. Now you’re only missing one thing, the instructions. These are lying on the floor in Eb Jr.’s room. Odd place, eh? You would expect them to be in EB Sr.’s office or in the hands of the Impling workmen. Anyways, once you collect the blue prints you can match up the items you have to the pictures on the blue prints. The pipes might seem a bit confusing, but their names give away their positions.

After fixing the incubator talk to the workimpling and EB Jr. will appear. After convincing him that the incubator is useful he’ll tell you to remove the ‘vermin’ and then disappear, annoying little rodent.

The Nut Sorting Union Of Squirrels And Other Creatures That Certainly Are Not Vermin Or Rodents run the nut sorting machine, and also just so happen to be the ‘vermin’ EB Jr. was referring to. You’ll need to talk with Big Ben (the squirrel with the yellow hard hat) on the west side of the nut sorting machine (which is west of the incubator) to settle this part.

You’ll have to negotiate with the talking squirrel to set a percent of nuts that the NSUOSAOCTCANVOR are allowed to eat while they’re sorting them. If I was to tell you what percent was right it would make it a little easier on you, but then you wouldn’t get to read the dialogue for the wrong answers.

After you and Ben have agreed on an amount, Ben says that you’ll have to re-train the squirrels (after all, nuts aren’t brain food, why else are crazy people called Nuts?). To do so just tell him that you’re ready to do it. A rolling puzzle will appear looking like this: 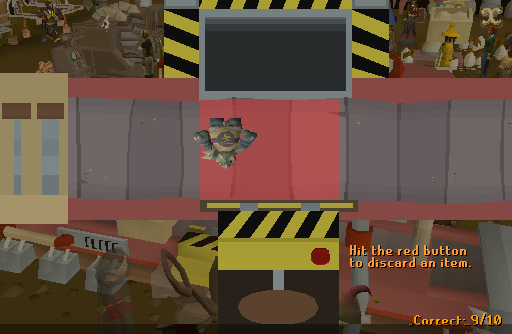 How a plushie of General Graardor got on the conveyor belt I’ll never know, but I do know what must be done to train the NSUOSAOCTCANVOR. Like it says, push the red button whenever something which doesn’t look like a nut appears in the red box. Once you’ve removed 10 pieces of junk (or 10 Graardor plushies) you’ll have re-trained the NSUOSAOCTCANVOR.

EB Jr. will appear again and (again) complain about noise. After convincing him that the rodents NSUOSAOCTCANVOR are good, he’ll tell you that he’s made a decision and that you should meet him in his father’s office.

After a short talk with EB Jr. you’ll watch a cut-scene showing EB Jr. putting on an Easter Bunny costume, just like his Dad! He tells you that he is now ready to take over his Dad’s position and that you should go tell his Dad.

Go back out the Southern hole and make your way back up to the surface and speak with EB Sr. and the following cut-scene will ensue. 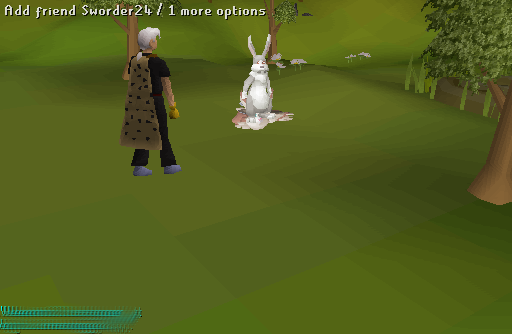 It was a costume all along!

The family line is always wearing the same costume, which explains why the Easter Bunny seems immortal. I wonder who first made that costume…

After the cut-scene, EB Sr. will reward you with a wieldable Carrot (which is much like the Rubber Chicken from 2005) and a new emote called ‘Around the world in Eggsty Days’. This emote looks like your characters runs away really fast (as if it ran around the world) and the comes back with a brown ball (slightly resembling a chocolate egg) which your character tosses up, catches, and then sucks on it making it smaller and smaller. I have no idea why your character sucks the egg instead of just biting it.

The Easter Carrot can be wielded in like the Rubber Chicken from the 2005 Easter Event. It can be used to whack people, which does absolutely nothing except annoying people and having fun.

All in all this was an ‘ok’ Easter Event. I didn’t like that they made Jr. out to be a brat. The Easter Carrot was also an alright reward, but I don’t think they should’ve added it because it removes much of the uniqueness of the Rubber Chicken, which was released 4 years ago. I think they did this merely to pacify the whiners who were complaining that they didn’t get one. If they had made the player wield the carrot in their left hand instead then I would’ve really enjoyed this as it would allowed the character to dual wield.

The layout of the welcome screen has been changed slightly to allow us to add further information to it in the future. – They made the message of the week area slightly smaller and moved some stuff around.

Pyre logs now have a ‘Make-X’, and code for this has been significantly reworked. Also, any bonus experience gains from the All Fired Up quest rewards should now properly apply. – Faster burning and more experience — Awesome!

The speed at which your prayers activate should now be back to normal, without the delay some players have been experiencing. – Hmm, I wasn’t one of the ones who had been experiencing this so I’m not sure how great it is, but yay for speed!