In the words of Jagex,

Ever since Dorgesh-Kaan made contact with the surface, the cave goblin adventurer Zanik has helped to defend the city from Sigmund’s villainous plots. Now Zanik has disappeared, her fate and whereabouts unknown, and Dorgesh-Kaan is more vulnerable than ever.

Captain Undak of the Dorgeshuun guard is responsible for the city’s defences, and he needs your help to investigate a possible HAM attack – but this will only be the start of your adventure. The mystery of Zanik’s disappearance will be resolved, and the truth behind a goblin prophecy will be revealed, as events move inexorably towards the realisation of Zanik’s destiny. Your adventures will include the discovery of a new Agility course, learning more about the history of the Dorgeshuun, and uncovering the plots of the Big High War God.

The Chosen Commander is the conclusion of a quest series that began with The Lost Tribe. I’ve had enormous fun working on this storyline over the last few years, and I’ve tried to give what I think are the best elements of the previous quests a final outing here. I hope you enjoy it.

Where to start The Chosen Commander:

Requirements to complete The Chosen Commander:

Level 46 Agility
Level 46 Strength
Level 46 Thieving
Must have completed Land of the Goblins
Must be able to defeat several foes up to level 125
To be reminded of what’s happened so far in this quest series, start the quest and then log in to the QuestHelp system – you’ll find a complete summary of all the earlier quests, from The Lost Tribe to Land of the Goblins.

To go along with the quest we’re releasing a new Knowledge Base article, History of the Goblins, which is in the Miscellaneous Guides section of the Knowledge Base. We’re also releasing a developer forum post looking back over the quest series, which can be found in the forums under Recent Updates. If you enjoy the goblin quests you may also want to read the newest Lores and Histories story, The Chasm of Lights.

To mark the end of the Dorgeshuun quest series, we’re releasing a limited-edition zip-up hoodie on the Jagex store. It’s a limited run of only 2,000, so click here to get yours now!

We’ve made a couple of changes to the party room due to concerns about abuse by real-world traders. Firstly, drop parties are now available only on two worlds (131 and 152). Secondly, players must now enter their bank PIN (if they have one) before putting items into the drop chest. We’re sorry we have to do this, but we can’t let real-world traders ruin the party.

We’ve added a wave-counter interface that will pop up at the start of each round in the TzHaar fight caves. This means you should now find it much easier to track which wave you’re on.

Male ogres have been graphically reworked and improved to bring them in line with the recently-updated female ogres. They look tougher and stronger than ever, but don’t worry; they’re still not the smartest creatures around!

Players will no longer increase their drop-value potential on PvP worlds if they repeatedly cast the basic strike spells.

Email registration for new accounts is now optional, although we would still advise you to enter your email address when registering, so that we can help you if you need to recover your password.

Crazy and new things that happened with this release,

A fair amount of crazy things have happened, and are still happening when The Chosen Leader was released.

One of the major ones was the servers crashing and NO players could log in. This server blackout lasted approximately 50 minutes.

This is the first quest to give an out-of-body experience that you can control.

This is the first quest series to be completed and consisting of more than two parts.

On the first day of the quest, one conversation misspelled monsters as ‘monters’.

But, along with all that I have just said, there is still one more that still hasn’t been fixed. You know when you move somewhere and you do that by the mini-map? Well, there is a bug, glitch, whatever you want to call it that allows you to put that flag anywhere, out in the middle of no where, out in lava, ANYWHERE!

Hopefully this will be fixed soon but until that happens, BE CAREFUL! You never know when you will be running from a monster and you will click out a spot that makes you run back towards the monster and possible die. Just be careful.

Also, another note, you know when you would run somewhere and you would run backwards then towards where you were suppose to go, well, this is now gone.

Now, for a review of the quest,

Well, here is my chance to review the quest and to try to get you as interested as I was in the quest, because it was a very good quest, well anyway, here I go.

“You cannot defeat me. See how Saradomin protects me from your heathen attacks?”

“What’s that behind you?”

“Do you think I’m completely stupid? Where did you come from?”

But that is just the beginning of the end of the story. But there is much, much more. An evil pendant, bowing terracotta goblin statues, and an evil plot from a new H.A.M. group. Sigmund makes an appearance but the end is very grim for him.

There is much more to this story but that’s for you to find out. A lot happens and a lot goes on, only you can solve the mystery of what happened to Zanik after she was sucked into the mysterious box on Yu’biusk in the last Goblin quest. New area’s unlocked. 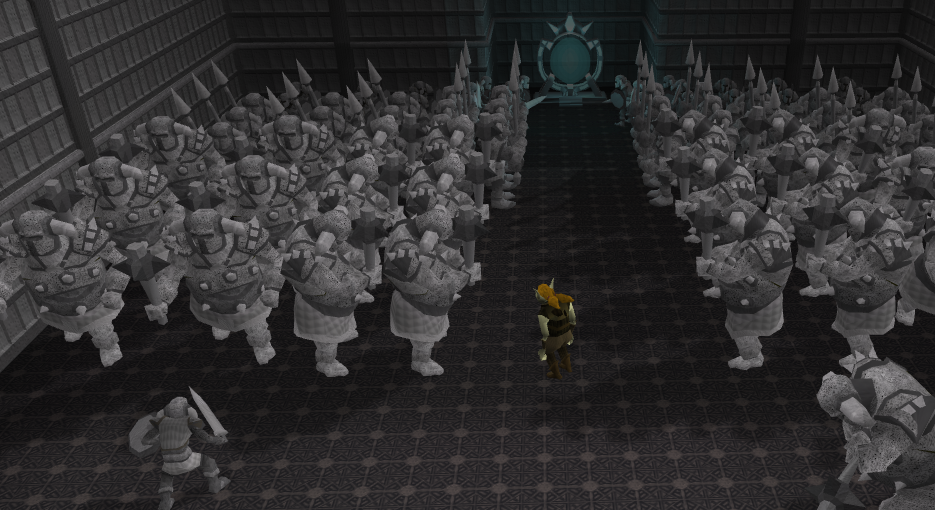 New weapons discovered. The ability to find a new god for everyone is discovered. Only you can find out what happen to Zanik when she got taken away and figure out the truth about the BIG HIGH WAR GOD! All of Dorgesh-Kaan will thank you for saving Zanik and finding the truth of the big high war god. 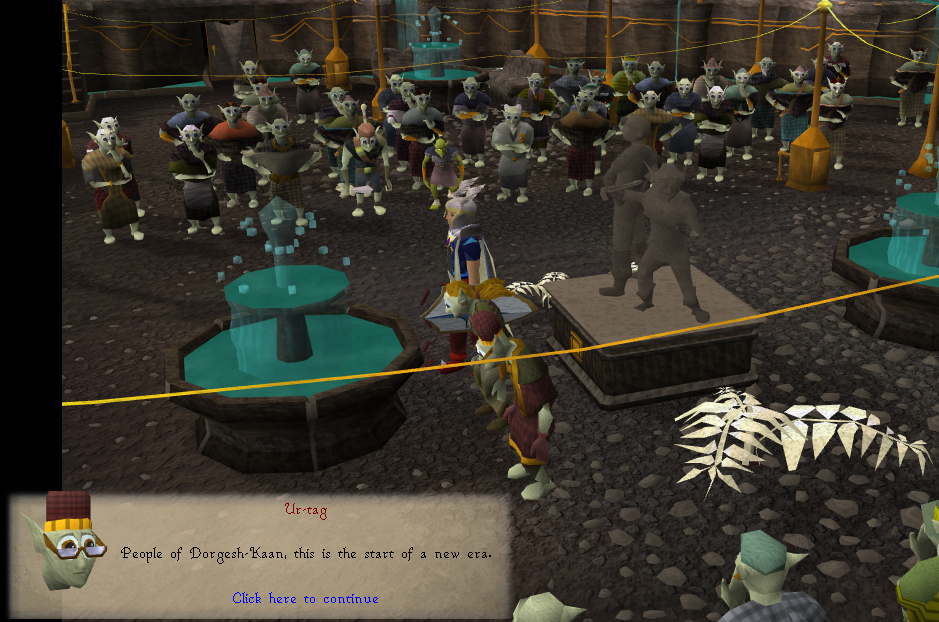 But, here is the reward scroll just so you can see what the reward for all of your hard work is. 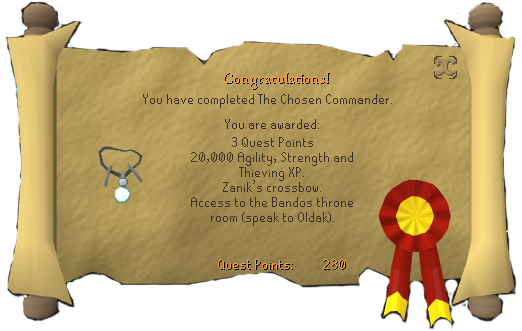 Overall, the quest is very good; it has a good story line, keeps you involved, and finally is one of those long awaited quests that finally finish off a quest line. It made a really good ending to the quest line and it really works. I hope more of these types of quests enders come out because most of the quests really need them. Great Job Jagex!