“Dun ignore your matey!” The time has come for a new era in which Jagex has decided to wise up and remove these scripted pests of uselessness and randomness. As most of us know by now, random events have changed quite a bit. It is time for night to remember! Party at the Varrock apothecary! *The music starts and disco balls fall around the apothecary’s shop.*
After a few minutes, a voice I never expected to hear poofed up. “Apothecary, it is happening again. I need that potion quick!” *The music stops and everybody mumbles and leaves.*

Okay, so not all of the random events that were deleted are gone permanently. Some were banished to Enchanted Valley like the Spirit Tree, the Rock Golem, and the River Troll. Another few spend their lives all around the world. For instance, Dr. Jekyll dashes into the Apothecary of Varrock from time to time. Another few of these removed random events consist of Cap’n Hand, where he resides in Port Sarim Jail, the Strange Plant that grows strange fruit in the south westerly of Brimhaven, and, of course, the Drunken Dwarf is found walking around pretty much anywhere like Bob the Jagex Cat.

There are a few things about the Enchanted Valley (Fairy Ring Code B K Q) I would like to note if you want to attack the guardians. With the Spirit Tree, it is only level 14, so pretty much any member could kill it without being damaged. The River Troll has no labeled level, but it seems to be pretty simple to kill as well. The only one that actually does a significant amount of damage to you is the Rock Golem with its boulder attack. Not only that they are fairly easy to kill, the rule in which combat experience is not a reward is in effect. While I killed them, I noticed that there is a small amount of experience to be gained. As well as the drops were fairly primitive. 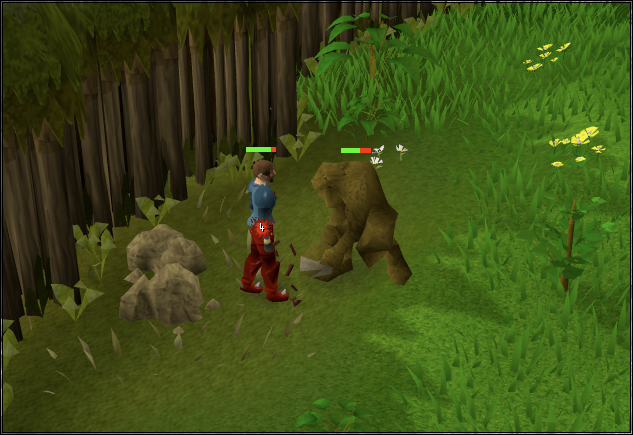 So while I am talking about dismissed random events, what about the ones that still remain? Well, quite a bit has changed to them. You may or may not have noticed that the rate of random events has changed. Jagex may have said that they changed the rate, but it really is all too random to really know exactly how much they changed the rate. Another thing that I really liked was that now all random events are even more random. So if I wanted a Gravedigger event for the zombie costume, I could get it while farming instead of bone burying.
Finally, it’s the moment you have been waiting for: the rewards. So you all know you can pick your reward from a gift box like this: 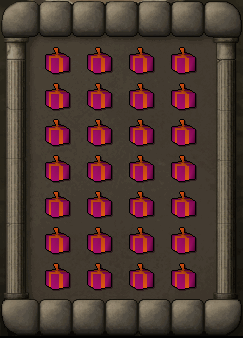 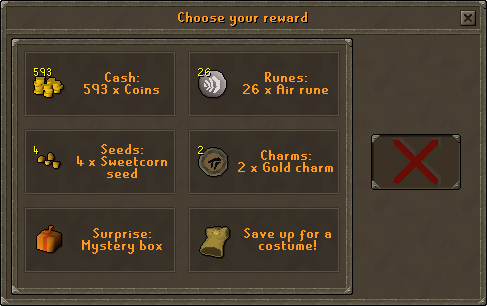 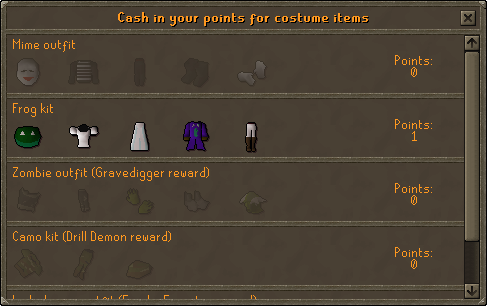 I can get any of the top four items within seconds. I don’t know about any of you, but these are worthless. However, for the costumes, the costume section seems to be the only benefit in the rewards. Each piece only costs one point; however, when you save up for a costume, you will only get the costume options in which the gift came from the designated random.

Now, there may still be those pesky random events, but overall, I thought this one was a great update. The rewards aren’t that great, but they never were and they never will. Some readers may hate me for saying this, but in my opinion, I think removing the wilderness was worth removing a few random events.