Base Information
Microsoft released Windows Vista in January 2007, and unfortunately it came with lukewarm reviews. Many users were apprehensive in switching from XP to Vista, and businesses were even more so. Experiences improved as Vista aged, but many had been scared away with the initial reviews. The general consensus came down to Vista requiring too many resources, and the fears that older hardware wouldn’t work. Microsoft took all of this in to account when designing their next version, Windows 7.

The first ‘easily’ obtainable release of Windows 7 was leaked after the Professional Developers Conference (PDC) in late October of 2008. The PDC release was version 6801, and is one of the most used pre-beta versions due to the ability to successfully activate with Microsoft. Through activation, the build will stay active until either late July or August 2009, by which time it is assumed the final version of Windows 7 will have been released. Many features were disabled by Microsoft when they gave out build 6801 to the developers, including one of main features of the presentation; the Superbar. Soon, a man by the name of Raphael Rivera Jr. from WithinWindows created a tool that allowed these features to be unlocked as if the common user were an employee at Microsoft. The initial ‘Blue Badge’ tool changed around 9 files, while the later releases changed several more in order to unlock the Aero peek feature.

Build 6956 was unveiled at WinHEC China, and was soon leaked via a virtual hard drive image (.vhd). Pirates, hackers, call them what you want, but soon they converted the virtual hard drive image into a bootable and installable .iso image. This version had everything that the Blue Badge had unlocked for 6801 users, with a few new UI changes to boot.

Some of these changes from Vista include:
– A new boot screen was added, moving away from the moving status bar of Windows XP and Vista.

-The Superbar replaces the traditional taskbar from previous versions of Windows. The user can pin any program there they wish, and move the icons around as they see fit. The icons in the lower right of the screen can be removed easily, depending on the user’s preferences.

The Superbar with Aero Peek

– User Account Control (UAC) was given several levels, instead of just two. The default is rarely intrusive like the traditional UAC in Vista. As of yet, I haven’t been warned at all about needing to provide Administrative Privileges. 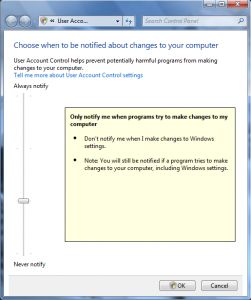 – Ribbons have been added to Wordpad, as well as Paint. 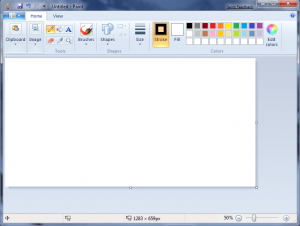 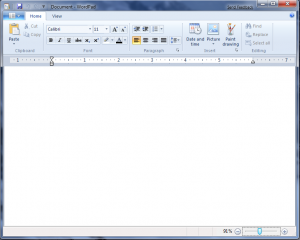 -The Calculator has a few new modes, including Scientific, Programmer, and Statistic.

-The ability to create and attach Virtual Hard drives (The ability to boot from these virtual drives has not been released yet, though it is expected to be a feature in final builds).

– Aero Peek, and Desktop Preview add more ease to switching between windows, and allow easy access to the desktop and any gadgets you may have there. 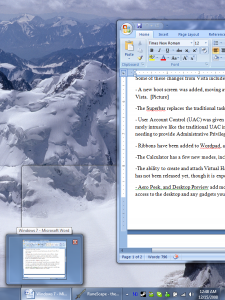 – Aero Snap allows you to quickly move a window to fill up the entire screen, or either half. 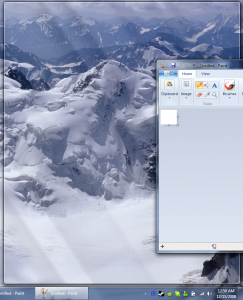 Aero Snap - Right side of scren 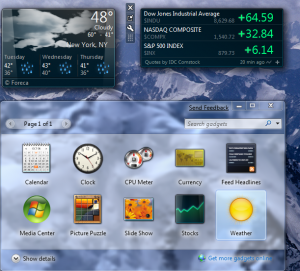 – ‘Recent History’ is now organized by program, instead of in a singular list. 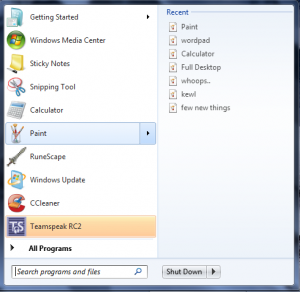 Numerous other UI changes are present, ranging from the change in colors of the UAC shield, to the Aero effects on maximized windows. Even the old games from XP are back. 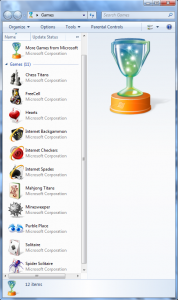 As for performance, I have been impressed with what I have seen so far in these pre-beta versions of Windows 7. I have been experiencing an increase of 5-10 frames per second with the same settings in Source based games, specifically Team Fortress 2 and Counterstrike Source. With this performance, I have noticed a decrease in CPU and GPU idle temperatures, as well as an increase in battery life. I have been able to literally sit in a tree stand and watch DVDs for at least an additional 15 to 20 minutes beyond what I would have had while running Vista.

Start-up and shut-down times have decreased when compared to similar setups on Vista, and they are at minimal comparable to times on XP. Start up on my set up includes all standard services, as well as an antivirus program and an NVIDIA display driver on Windows 7, while on Vista I have a combination Firewall / Antispyware / Antivirus and the NVIDIA display driver. In my testing of Startup and Shutdown times, I timed Vista with 31 seconds to login, 105 seconds to have specified programs running, while Windows 7 took 33 seconds to login, and 80 seconds to get to all of the programs running. Shutdown times were much closer, with Vista at 17 seconds and Windows 7 at 12 seconds. These tests required each operating system to have an antivirus running, Digsby Alpha build, Skype 4 Beta 2, Windows Live Messenger Beta, and Steam running for the second start up time to end. Shutdown required all of the aforementioned programs to be running, and was timed from me hitting the shut down button till my computer was fully turned off. Though these are my personal experiences, the official specifications on Windows 7 are expected to be lower than what Vista required. Some people have reported being able to run Windows 7 on their netbooks, even with full aero. If the performance requirements are what have kept many people from switching from Windows XP to Vista, this may be final deciding point for upgrading.

I have been running a random build of Windows 7 for nearly a month now, and as many of my friends would tell you, I don’t like switching back to Vista. I thought I’d have Windows 7 just for looks, just to test out and show people. Once I figured out how to access my other partition and use some of the programs I would have normally missed, I really dread going back to Vista to do anything. It really isn’t bad, but I have become so accustomed to many of the Windows 7 only features that going back to Vista seems like I am missing out. If you have been following along with my older articles, you may remember that I felt the same way about Vista compared to XP. I’d have to assume that this is for similar reasons, usually a good sign when talking about the newer version of something you use daily.

If you too would like to try Windows 7 before the final release, stay tuned for Microsoft’s release of a public beta of Windows 7 in January 2009. 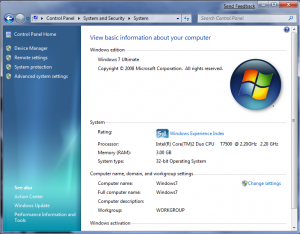 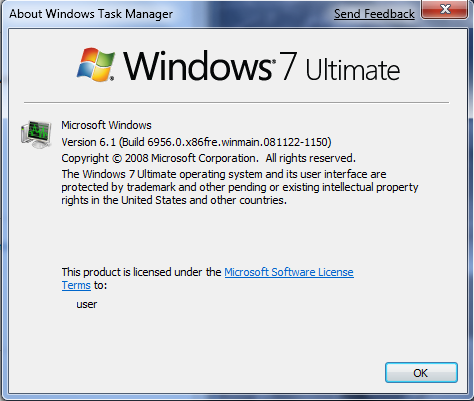