How Runescape Holidays Have Changed

Holidays have always been a big part of Runescape life over the years. There have been the 3 major Runescape holiday events: Halloween, Easter, and the favorite, Christmas. These events started as drops of an item, but have changed many times over the years. In addition, some future events could include even more holidays.

The first of these holiday events are going to be called the classic events. That’s because they occurred in the days of Runescape Classic. These events include: Christmas Crackers,Pumpkins, Easter Eggs, Halloween Masks, and Santa Hats.

The Party Hats, from Christmas 2001, were obtained from Christmas Crackers. Two players would pull the cracker, and one would receive a party hat, and the other random items from a select group. Back then these festive hats were traded frequently, players unaware of how valuable these hats would become.
Scattered throughout the Classical Era was the edible drops. They offered some of the most expensive food Runescape has to offer. The Easter Egg and pumpkin are examples of these. They were picked up on the ground as a drop as well. They heal a hefty amount of Hitpoints, 12 & 14, but not worth the cost of going out to use as suitable food.

The Halloween Masks were from Halloween 2002. They came in colors: Red, Blue, and Green. These were dropped at random throughout Runescape as well. These colorful masks somewhat rival the Party Hat in visual appeal. The Santa Hat, dropped in Christmas 2002, was the last Holiday Drop. This symbol of the spirit of Christmas, the last of the holiday items that can be traded, has become a staple of Runescape wealth, with only the big movers and shakers owning one.

The next era, one of the hands down favorites was the “Gear and Gadgets” Era. This era involved a lot of funny hats, scarves, weapons, and funny clothes. These range from wintry hats to rubber chickens. From scythes to yo-yos. This is by far the largest era in Runescape Holiday Events, spanning from 2003 all the way to parts of 2008.

Now, a commonality in almost all of these events was somewhat of a story. You do some favors, maybe a jig or two, and you claim your items. They were delicate, short, and to the point. Now of course all of these items are not trade-able. These items mostly consisted of weapons and clothing, however some lucky few included a shiny, new emote to show off to all of your friends. These included Halloween 2005, and Easter 2006. The event that gave the most rewards would have to be the Christmas of 2005. This one gave hats and scarves and fun puppets to play with during the season. I spoke with a player, Pfkninenines, about this event. He said, “My favorite holiday event would be the Christmas of 2005 (I think). [I] Logged in to see the wonderful Christmas Tree in Varrock, and my job was to fill it with ornaments.  The event was straight forward, and it brought everyone together.  Most people were willing to help anyone, especially that time of year.” In that event, you got baubles and decorated them with vibrant colors. Then, the player went to decorate the Christmas tree set up in Varrock, much cheer was found in this area, with the players. Some singing Christmas carols, others giving gifts to old friends. The magic could be felt in the air. Pfkninenines also went on to say “That was a good year.” 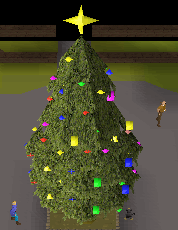 The normality of these Holiday Events continued, but a trend was growing. These events started to take longer and longer. Each with a more intricate story line, diving deeper and deeper into the heart and soul of these holiday events. The Easter of 2008 is an example of this, where the event took so long, some spent nearly hours at the computer trying to complete it. The reward being mediocre, some felt cheated at this event.

This is where a new era began in Runescape Holiday Events. I will call this era the “Quest Event”. These started with the recent Halloween 2008, where a quest would appear for all players to do, and then disappear for the Free Players after an allotted time. Mod Mark from Runescape’s design team, confirmed future quest events by stating, “Much like this year’s Hallowe’en, we’ve decided to release a quest at the same time as our Christmas event, which means that the free game will have access to that quest over the Christmas period.” It can be derived from this that more events are coming in the future tied to quests, so that writers and designers can go as deep into stories as they want, without the fear of boredom from the players. The players, consumed by the thrill of the event and the storyline will gladly click away for hours on end, hoping for a great reward.

This year saw a dramatic change in Holiday Events, with the introduction of a Thanksgiving event into Runescape. Now, this is strange, because Runescape comes from British origins, which do not celebrate an American holiday. Much like this with the 4th of July. No words are spoken, but American players took it upon themselves to wish each other a “Happy Thanksgiving”, or “Happy Turkey Day”. The lack of an event was a staple that Jagex still retained control over their game; no matter how much the player pleaded for an event during that holiday. However this Thanksgiving 2008 Event showed that they are starting to succumb to the needs of the player, trying to become more global oriented. Maybe it’s because a significant amount of the Runescape population is indeed American. Either way, this is a landmark event for Jagex, who is stepping out from its British ways into a more global outlook. Another player, Davo338, expressed his surprise by saying, “I was a little suprised that they were actually going to have an event for Thanksgiving. It struck me funny because it’s almost like if they were to have an event on July 4th for Independence Day.”

To wrap up my article, I turn to probably Jagex’s most favorite holiday, April Fool’s Day. You thought I forgot, well consider it an early April Fools joke about April Fools. Anyway, many funny items have come out as a result of this “holiday”. Some things like “horses”, which turned out to be toy horses. Or even the “Dragon Plate”, which was a plate you spun around on your finger for a short period. However nothing is quite as hilarious as the articles the put out at the April Fools time, which cannot be viewed on the website. One that comes to memory is that of April Fools 2007, where Jagex said that everything would be converted into Cabbage. There would be introduction of Cabbage Runes, a quest called Cabbage Ritual, and even Cabbage armor. These are removed so that players do not think that they are serious, but everyone still have a good laugh over it all.

The holidays are etched into days in history, but how people celebrate them will remain a mystery. Will there be more quest-based events, or possibly another drop of some fashion. Few know, none speak of it. Only one thing is for certain, the holidays, no matter which one fill people with a sense of cheer and togetherness. It is the time when people can band together, no matter what separates them, and go for a common goal of a good time and good cheer. Who knows, maybe even a laugh or two. That is why some of the favorite times of the Runescape players are the Holidays.