The forgotten places in Runescape

Everyone has visited the major places in Runescape. Varrock, Falador, The Grand Exchange, and other such points of interest. However, in such a large game, there must be places little visited as well. Places that sit alone in silence, watching players walk by without even giving a second thought.

Welcome to the giant volcano. This place has been given no name by adventurers, but is a large mountain of lava and fire. Earthquakes rattle this area, and firebombs shoot out threatening to fry any who dare climb on the spot. The volcano is located in level 52 Wilderness, the north-east corner, just a stones-throw from the rouges castle. There is a bridge of rope and planks spanning the top of this volcano, perhaps worshiped by an ancient Runescapian civilization. 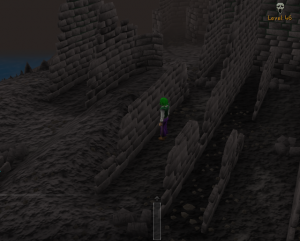 The next forgotten place in Runescape is that of the ancient fortress ruins. Standing just south of the giant volcano, not many people know about this place, as it is usually looked over by passing adventurers, mostly because they do not want to take time to explore it. The only inhabitant is Edward, who sells capes to any who dare venture this far.

However, not all of the not-so-traveled places are in the wilderness. The next forgotten land is that of Dragontooth Island. Most people only visit this place during the Ghosts Ahoy quest. This island is full of small hills and trees, but that’s just about it really. Still, it is a nice peaceful place that the people who just want to get away might go to train magic through Alchemy, or chat with friends and the like.

Most of the abandoned places in Runescape are usually associated with quests. The crash island from Monkey Madness, with its poisonous snake inhabitants. Or the Underground Pass from the Underground Pass quest. Mostly because these areas only serve one purpose, and after the quest it’s not really worth it to go back. However, some quest areas can be used as good training areas. People can be seen at these all the time. So always keep a watchful eye during new quests. 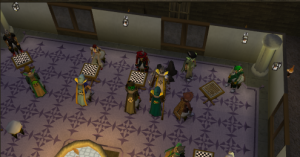 Before Funorb, ‘Scapers had another place to turn for board games. This place, of course, being the Burthrope Games Room. The only reason this place is seen at all is because players can teleport there with a games necklace. That teleport is good if needing to go to Burthrope, or any places around the area. Players can play such games as Checkers, Reversi, Boxes, or an old-fashioned game of Connect Four. World 45 is the only designated world for this place, so that would be the best place if looking for a quick match with people. One player commented, “I love the feeling of community you can’t find on Funorb, the players are actually players, not just text on a screen.” However, even in the designated world, this area is still sparsely populated. Whatever your favorite game might be, a trip to the games room might prove to be a very worthwhile venture.

Ever heard of the Champions Challenge? Well not many people have. In fact, its one of Runescape’s best kept secrets. When asking a player if he thought it was one of Runescape’s greatest secrets he replied, “Yes, I have never gotten one challenge in like a year and a half.” Located under the Champions Guild, the Champions of the races sit among themselves, waiting for a challenger. It is said that a challenge scroll is rarer than a clue scroll from a goblin. It is truly an honor to have defeated a champion, much less all of them. However, the only reward for defeating all of them is a banner to be displayed and a congratulations scroll.

No matter how much these places are left barren, none of these forgotten lands are quite as massive or as useful as the great dwarven capital of Keldagrim. A total of three quests can be started in the area, and this city plays hosts to many other things as well. A quiet bank, clothing stores, an anvil, furnace, and a gem store are just some of the many things this city has to offer. It is as big as Varrock, yet there is not a soul to be found here. Possibly the fact that there is no direct teleport here is to blame, unlike the other major cities and towns. Another could be the fact that there is no real commodity that can be found here that can’t be bought on the Grand Exchange. The city is just amazingly beautiful, yet there are no admirers. The only thing that can be found here that cannot be found anywhere else is the blast furnace mini-game, where players can work together to make bars for less supplies then making them in a normal furnace. Keldagrim is also the only place to buy construction supplies, which has not been too popular of a skill, so the shop always sits empty. This place is truly one of the most forgotten places in Runescape, and it would be a very nice sight to see it as full as Varrock is.

Along with the densely populated in Runescape, there are a handful of the not-so-traveled places as well. These areas are what give the game some of its flavor. There are places you don’t have to visit, but that you did just to see them, just to explore. Maybe it’s the thought of that someone took the time to program this piece of the game, without ever having the thought of it being popular. Knowing that there are still places to get away puts an uncertain mind at peace. A secret quest training area, a beautiful view, just some of the small rewards to be reaped from some good old-fashioned adventuring. Some are content with just getting by around the hustle and bustle of the big cities, training with everyone else, selling their wares when they need. But then there are some, the free spirits, who are not satisfied with the norms of today’s society. They have the insatiable urge to be free, to explore the unknown. These are just a few of those places, its up to the players to find these cryptic locations,  and truly make Runescape an adventuring game.