Rocking Out – A Pirate’s Tale

What do zombies, pirates, monks and evil plots have in common? Well, if you want to find out, it’s time to start digging! Rabid Jack is back…but who is he? It’s time to prove your pirate credentials and win the trust of the motleyest crew in Runescape. The dark secrets behind This Albatross, Rum Deal and the Great Brain Robbery are yours to discover…if you dare!

To start:
Speak to Bill Teach

I’m gonna try something new. Instead of putting my analysis after my quick quest guide, I’m gonna put it on top. Also, since I’m only doing th quest, I’m pulling the information out of the actual quest page itself rather then the direct update! I am SOOOO original!

Anyways, this is a partial continuation of the pirates quest where this strange person named Rabid Jack is involved. Because it was so long ago, I have the impression that Jagex made this quest just to remind us final questeers that there is such a character afoot in the drastic suspense of multi-part quests.

What I think is that Jagex will start finishing these quests when they finish this graphical update, because they want to end all these quests with a flourish and effects that can never be captured without, as they said “full-screen” and “shadows”.

What’s also interesting about this quest is that one of the cinematics involves an actual sky, which is definite foreshadowing of what may become of the Runescape world should they finish this update. I’m looking very well forward to it.

Lastly, this quest also, despite being a branched-off version of One Small Favour (how I miss that quest), is another one of those convenience quests where you get more convenience then reward. My favorite being the getting into Brimhaven Agility Arena for free from now on. Perhaps that will boost its popularity once again.

All in all, this quest, despite taking me several hours to complete, is a good one nevertheless, and I would rate it up there with the rest. Probably won’t be anyone’s favorite, but at the same time, it’s well-worth to complete and do. I suggest you clear your bank space a bit and do it whenever you get the impressively high stats required (finally, the quest cape is becoming a real accomplishment!).

Start things off by chatting to Bill Teach. Like everyone else, he’ll say that every pirate captain that’s ever heard of Rabid Jack swore an oath to not talk about him due to classic pirate paranoia. If you want any revelations about this strange character, you have to talk to the pirate that … killed him? … yeah.

First off, you have to get yourself arrested as a cut-throat pirate. First visit Mos Le’ Harmless and buy yourself a full pirate outfit. Then you head down to Rimmington and enter the new building there with the customs officer. After asking some questions, he’ll confirm that you’re a pirate and order you to stuff every single item you have into the locker and … come “quietly”. Do so, but make sure you also put the pirate uniform in, as you’ll need it later.

You’re gonna get the best room in the … rather tiny prison. Good room and rent, not too roomy, comes with facilities, and even includes fresh air intake via great big hole in the wall used to easily escape should you get bored of being in prison. … seriously, what has happened to the law system?

Anyways, it turns out that the pirate, Young Ralph, is stone deaf and coincidently staring at the wall for some odd reason. You are stuck in the cell without anything, and you need to somehow get his attention. If you like to figure things out on your own, as I did, then skip the next paragraph. Otherwise, if you have no sense of adventure, read on … 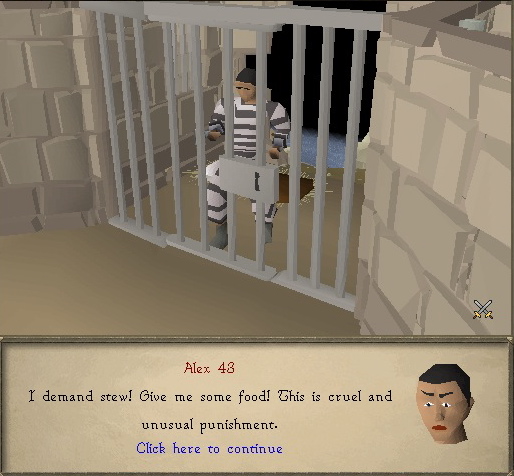 Let’s start by getting us some items. Grab the obvious tin cup and use it on the door to pester Hard-Hand Harry until he dishes out some fishy judgment, resulting in a mess-up shirt. Underneath the window to Ralph, tap the pipe and after a series of events, you will receive a pipe. Also shout to the guards for a pen, paper, and ink. Since writing a confession is useless and a note to Ralph is too since he won’t notice it, instead just dump the whole bottle of ink on the paper and save the bottle. Outside, there are 2 rocks – a perch rock and a sharp rock. Smash the bottle on the sharp rock and use it to cleave the accordion … yes, just outside, in the rubble, there is an accordion. Once it’s cut, jam the pipe in and seal it with the inky paper to get a vacuum-cannon. Now for the ammo: use your fished-out shirt on the perch rock and you’ll attract a seagull. Now for the weird part: use the vacuum-cannon on the seagull and you’ll get your “ammo”. Use that odd set-up on Ralph’s window and you’re done!

Now that you have his attention, you’ll find that he is, in fact, an excellent lip-reader. After a quick conversation, you’ll learn that the only way to get the secrets of Rabid Jac- oops, bad luck to say his name. To get HIS secret, you need the mark and approval of the 5 pirate captains that fought against him to the end. They are famous pirates all around Runescape – more time consuming to get to rather then tricky. Should you forget where one is, simply check your quest guide for his location.

Now for the boring part.

While you have no equipment right now, escape to the gnome glider in Karamja and teleport somehow to Brimhaven. Have a chat with Izzy No-Beard and he’ll give you the mark … if you can get him a brooch from prison island. He’ll tell you about a lockpick hidden in the bed, so when you return to the prison island, you can get through the door, kill an officer for his clothes and weapon, and use it to get into the evidence you need – the brooch. Return it to Izzy for the mark.

Now, since you’re gonna be away from the prison for a while, grab some equipment. Include your pirate suit, 20 coins, 2 bronze bars, a hammer, an ectophial, 10 ectotokens, some charcoal (buy from Tai Bwo Wannai general store while you’re on Karamja), your diving suit, a ghostspeak amulet, and a ring of charos. Whenever you can, hammer the bronze bars into bronze wires.

These can be all done in any order. I suggest that if you’re using this as a guide, read the entire thing so you can find where you can take shortcuts to minimize traveling time and runes. Note that you will be using the ectophial a lot, as well as teleports to your Rimmington house or Falador, whichever one you’re able.

If you head to Port Sarim and chat with Redbeard Frank, he’ll want proof that Rabi- … HE is out there again. Take a trip to Harmony Island and talk to Brother Tranquility for a letter depicting the attack. Chat with Bill Teach and Brass Hand Harry while you’re there (details 2 paragraphs later). Unfortunately, when you give that to Frank, he won’t accept it as proof. Fortunately, a trip to Braindeath Island in your pirate suit will give you the proof you need once you talk to zombie pirate Captain Donnie … provided you’re able to reason why you needed to charcoal-rub 50% Luke’s leg for the rest of it … once that’s done, give the proof to Frank for his mark. 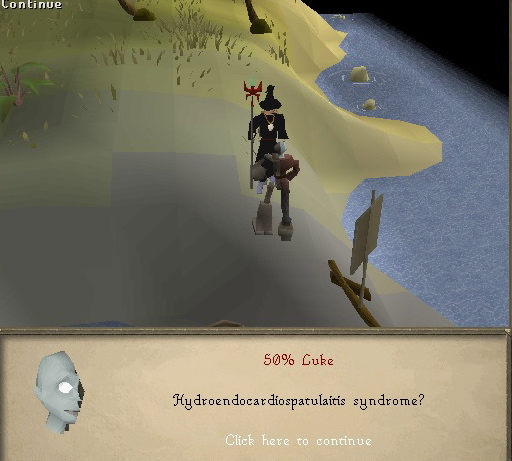 While you’re on the Braindeath island, you might as well chat with Captain Braindeath himself. If you can get the Port Sarim Rusty Anchor inn to supply his “rum” using a variety of disguises to give the impression it’s in high demand, he’ll give you the mark. With your wits, your disguises, and your 20 coins, chat with the bartender, try a disguise to no avail, get the bartender drunk with 5 rounds of beer, and then use the disguises. Once all that’s done, take the note back to Braindeath for his mark.

Now you chat with Bill Teach. He’s going to want an Idol of Many Heads for his mark. Doesn’t sound so hard. Head to Mos Le’Harmless and go upstairs the northern bar to meet 50 Ships Mufassah as well as the fifth captain, Brass Hand Harry (see next paragraph for his). Chatting with 50 Ships will reveal that the idol is in a sunken ship on Dragontooth Isle. With your ghostspeak amulet, chat with the ghost captain for a trip there, and use the ring of charos to lower the fee from 25 ectotokens to only 10. Once you’re there, walk east along the coastline until you find a post, which you dive at. Underwater, you’ll find the ship easily, but there is a pile of trash on the bottom floor and a locked chest on the top. If you swim around the ship and use the minimap to trace a lone yellow dot, you will find yourself a real live Karamthulu which you must catch to obtain a key. Use the key on the chest for a crowbar, and use the crowbar on the pile for the Idol. Once you have it, return to the surface, to Port Phasmatys, and to Bill Teach for his mark.

Finally, it’s Brass Hand Harry. His is definitely the faster task, if not easier. Take apart the 5 ruined hands he gives you for the pieces to a fixed one, use it with your two bronze wires on an anvil somewhere, and solve this interesting, though easy puzzle. Once that’s done, return to Harry for a slip of paper and an ink pad, and make the mark yourself.

Now that you have all 5 marks, return everything but the marks into your bank, chat with the Customs Officer, stick the marks into a folder he gives you, and hand them over. Quickly, when you’re in the prison, break out, slay a guard, put on his clothes, and chat with the upstairs evidence official for your file and the 5 marks. Return to your cell and hand them over to Ralph to hear the dreaded tale of … oh, what the heck, Rabid Jack.

Be sure to turn your music and sound on for the full effect. 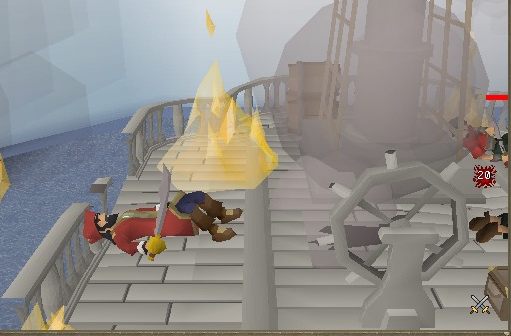 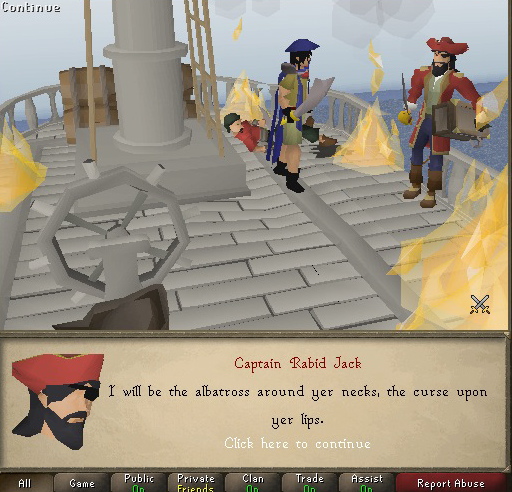 The story ends with kittens, … 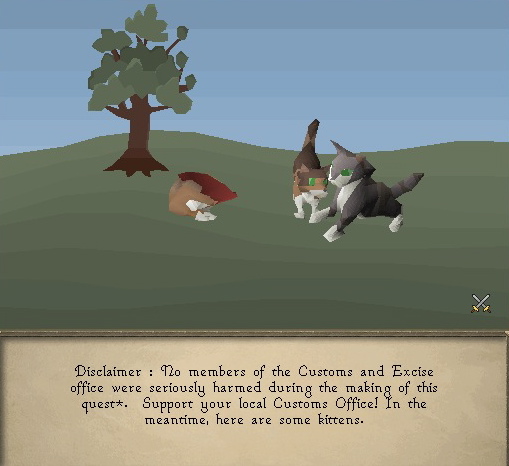 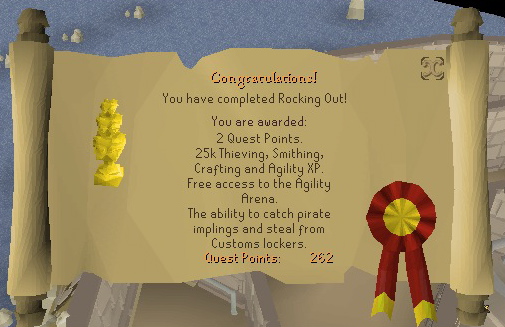 … and a lot of lovely conveniences, including free access to the agility arena in Brimhaven and the ability to chat with Mos Le’Harmless pirates without a book. Not to mention the ability to steal from evidence lockers and catch the rare pirate implings (if you’re hunter level 76+) for some interesting clothing. For those level 71 Summoning, you can even raise a zombie parrot!