As an avid fan of the slayer skill, when I read in the June BTS news update; “Smoking Kills demands the best of seasoned slayers, who will need to use their resources in innovative new ways to survive”, I’ll be honest, I was expecting a requirement of about level 65 or above, not 35. Nevertheless I should have realised that a high level in slayer is quite hard to achieve and it would be unlike that a quest would come out for people like me, who spend most of their Runescape gametime farming Abyssal Demons and Dark Beasts for drops instead of doing the quests that are released bi-weekly. As with most slayer quests, it is my worry that I’ll end up with a low level slayer monster as a reward, which later is found to be incredibly bad for training. Because of that, I very rarely do the quest on the day of release, but with a reward which states “Two new dungeons to explore” and ” A new Slayer Master and some new Slayer gear”, I couldn’t let this one slip by.

It should be noted that at this time of the article, I do not know the rewards for the quest or what the quest contains. However, this article will contain spoilers and so if you wish to do the quest on your own without having the reward(s) blurted out and spoiling the surprise, please do the quest first!

I predict the reward(s) for this quest are likely to be a number of low to mid-level slayer monsters which will appear in one or both of the dungeons, while the rest of the dungeon is filled up with existing monsters.

The slayer master, although I am very much anticipating to be of a higher level that Duradel, is more likely to be one of the same skill-level of Vannaka or Chaeldar.

The quest begins in Pollnivneach by talking to someone called Sumona. It was at this point I realised who the new slayer master was going to be, and I checked various skill menus to see if I could find anything else, but no, only Sumona appeared in the skill menus and I was greatly disappointed. Sumona required level 35 slayer to use her as a Slayer Master, and so I doubt she’d give very good tasks at all.

Moving on, the quest was outlined in the first few pieces of script with Sumona, a red-eyed dopey looking woman. Apparently, her twin sister had been captured by “fiendish monsters and is held down the town well”. Seems easy enough, doesn’t it? Well, I went to jump down the well and a dusty coloured cat attacked me, screaming all sorts of meows and the such at me. Realising I hadn’t had my catspeak amulet with me, I swiftly took a carpet to Sophanem, picked it up and attempted it again. (For those who’re wondering, you speak to the Sphinx).

I was then sent to talk to a dead slayer master, who resides as a spirit in the Ruins of Ullek, east of the agility pyramid … by a cat. So I flew on the carpets to Nardah and went to the pyramid. I then had to run around a rather giant plateau and into a marsh, which looked really nice, graphically speaking. I climbed over a fallen pillar, climbed some stairs and entered the ruins after re-filling my waterskins from a spring of water.

The next half an hour consisted of running back and forth to the bank after forgetting my pickaxe, then my ghostspeak amulet. During this time, the quest rewards were spoiled to me so I was very aware of what I was getting. However, I still carried on and got back to the ruins and made my way through the few traps and monsters to speak to the spirit. I was sent down two corridors, one containing magical skeletons and the other ranged; I slayed these with ease and activated two levers on each side to de-activate the center path’s traps to give me access to the dead slayer master, who warned me of what was to come. 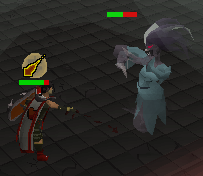 After talking to the spirit, I was allowed to create a hybrid of a facemask and earmuffs, using these, I entered the pollnivneach well and attempted to rescue the twin sister. I was confronted with a banshee mistress and 4 insectoid assassins. After a short but somewhat difficult battle, the twin sister was “rescued” and I returned to Sumona for my rewards. 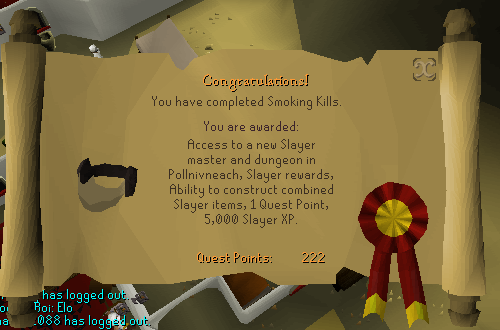 All in all, the quest was quite decent. I liked it, which is strange for me and it’s opened up a whole new aspect of training slayer. I do worry that now slayer will become just as easy to train as normal combat skills but I’m very happy with the addition of the new slayer mask and slayer ring. I’ll be looking to get those in due time.

I’m not entirely sure on how many points you’ll get per task, however I am hoping it’s not too much. Perhaps 15-20 will be sufficient for medium leveled tasks and up to 30 for higher leveled ones. That way, not only will people get more incentive to train slayer, it’ll prevent any abuse towards powertraining 99 slayer and devaluing the cape. Because before this quest, it was certainly one of if not the hardest one to obtain, and I’d hate for that to change.

That’s all for now,
Anubis.