Following your disruptive behaviour in the Tyras Camp, things are not going well for the catapult guard. Already unpopular with his comrades after various security lapses, he’s now neglected the catapult, allowing damp to seep in and rot the frame. General Hining is furious, the replacement catapult parts haven’t arrived and the rookie catapult engineer has gone missing in hostile Isafdar.

It’s a good thing, then, that a bold adventurer with your Construction knowledge is in the area; however, this will take much more effort than simply building furniture. You’ll need to source some schematics, collect the finest materials and exert your mind as well as your hammer-hand…and that’s just when building the catapult. You will also need to put it through some rigorous tests before the fearsome weapon can be deployed. After all, you’ll want to be pretty sure of where your boulders are going to land!

As well as some Construction know-how, you will also learn to be more effective when using Castle Wars catapults. Needless to say, this Catapult Construction quest will help make amends for the carnage you caused during your last visit.

Where to start Catapult Construction

Speak to the Tyras Guard at the catapult, to the north of Tyras Camp.

A Castle Wars reward and a new piece of clothing
A tricky shape puzzle!

Over the past week, the new music system has been causing issues with server load, leading us to remove some of it so that it doesn’t interrupt your enjoyment of the game. We would like to apologise (misspell on Jagex’s part) for any inconvenience this has caused you over the past few days – as you can imagine, it is difficult for us to know the exact effect that hundreds of thousands of players, both members and free, will have on servers when we release a new piece of content like this! We have put in a lot of work to optimise (They actually misspelled TWO things! They’re not immortal no more!) the music system, so you can now use it without any server issues at all.

On another musical note, we have looked at those songs that players cannot unlock, due to them being related to completed quests. Anyone who missed out on unlocking a quest-specific track while the music system was deactivated, and who can’t return to the area to unlock it again, will have the track unlocked for them in this update. As always, if you notice any further issues with this or any other content, please do send us a bug report. Your support is incredibly helpful in these matters.

Please note that, before you read all of this, that there MAY, in fact, be spoilers to the quest, and thereby it would make more sense and convenience if you either actually did the quest before reading this, or just really like reading my writing. Either way, proceed at your own desire.

When I first read that they were going to base a quest off what used to be Tyras’ Camp, I was filled with joy. I thought that it would mean there’s yet another continuation to the whole plague city series, and that we could stop Zamorak once and for all, or at least perform another step to ‘buy us all some time’.

Oh, how disappointed I was when the quest actually came out. It contributes NOTHING to the quest save for the fact that you get to “make amends” to what you did to Tyras in the Regicide quest.

All this quest really entails is that you start it at Tyras’ Camp (now General Hining, who suddenly gained a lot of weight from last we saw him), look around the entire Isafdar forest for a very VERY lost guy, gather a bunch of items, and finish the whole thing in one go. Nice and short, and well worth doing if you want a little boost to your already good construction level.

Here’s a basic summary of what and how to do this quest; so said from a former guide-writer:

Start with a mostly-empty inventory, or immediately carrying the needed items. You start off by pushing your way through the leaf-traps and trip-wires all the way to General Hining’s camp (Take the charter boat, Gia? Why didn’t you say that EARLIER?!?), where you’ll have a chat with the catapult guard. After a few mean comments, you’ll (eventually) agree to help him. Go into the camp and chat with General Hining, who will give you a letter to take to the lost engineer.

I can’t guarantee it will be the same for you, but I found him to the south of Lord Iorwerth’s camp – southwest the log, in a very well-hidden nook and cranny that you have to bypass some stick traps to get into. Once you find him, hand him the letter and explain the situation. In the midst of constant chat, you’ll receive blueprints. Once you’ve finally talk about everything you can, say goodbye, and then TALK TO HIM AGAIN. Ask him if you can read the letter, and he’ll show you where to get everything and what you’ll need.

You will need:
– Hammer
– Knife
– Saw
– 10 mahogany planks
– 90 mithril (or above) nails
– The Metal Parts
– Around 3500 gold (I recommend chartering the ship at Port Sarim to get back)
Guaranteed, you’ll have to leave Isafdar for the dwarven mines of Ice Mountain for the metal parts. Go to the upper building opposite of Nulodion’s and talk to Rolaf the dwarf, who will point you to Port Sarim. Apparently the delivery dwarf hasn’t delivered the parts yet, so you need to find him. What could’ve stopped him? Thieves? Muggers?

… beer. Chat with him, and he’ll refuse your pathetic hide, saying you’re not a sailor and that you’re not even wearing the right hat. If you look just outside, you’ll see another sailor passed out on the ground. Poke him, dance on him, tea-bag him, or light him on fire if you will; I would just suggest you steal his hat and wear it while talking to the dwarf again for the parts.

Once you have everything, I recommend you use the blueprints to make the catapult parts right now so you would have to carry less. Click the blueprints, and select the final option to convert your 10 (unnoted) mahogany planks and 90 mithril nails into … TETRIS PIECES! WHEEE! 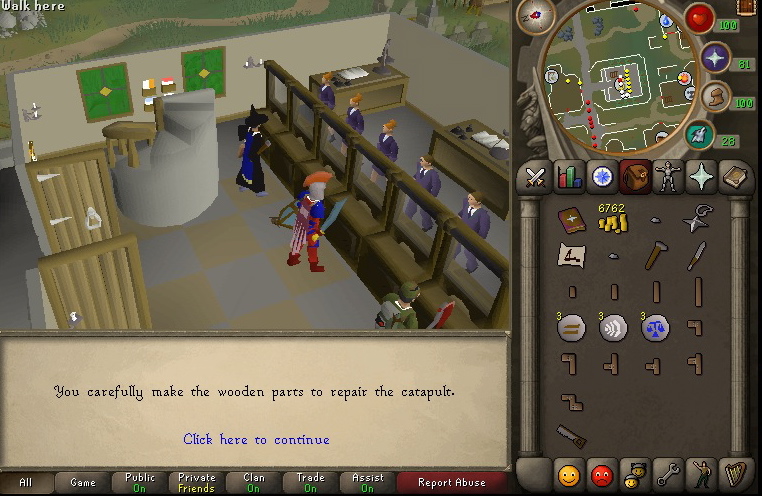 Just kidding. Get back to the camp by whatever means necessary, and talk to the catapult guard to fix the catapult. This puzzle is actually easier then it looks – just takes some trial and error.

The basic directions are to arrange all the pieces in such a way that both shapes, the left and right side, have all black squares covered in wood. Do it!

Once complete, talk to the guard again. 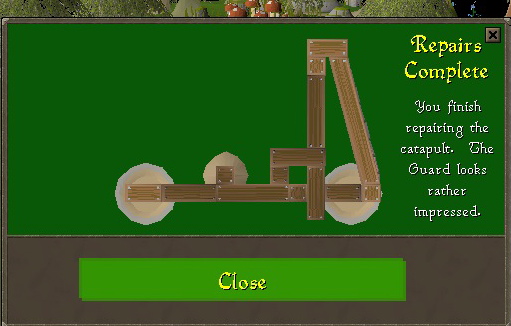 Time to test it!

Those who are familiar with the Toad Launcher will have an incredibly easy time with this. You’re not actually aiming in a direction, you’re aiming at a grid. Going left and right moves your invisible target reticule left or right, and increasing/decreasing the load moves it away and towards you. To help see which square you’re aiming at, I recommend you do this in low detail. 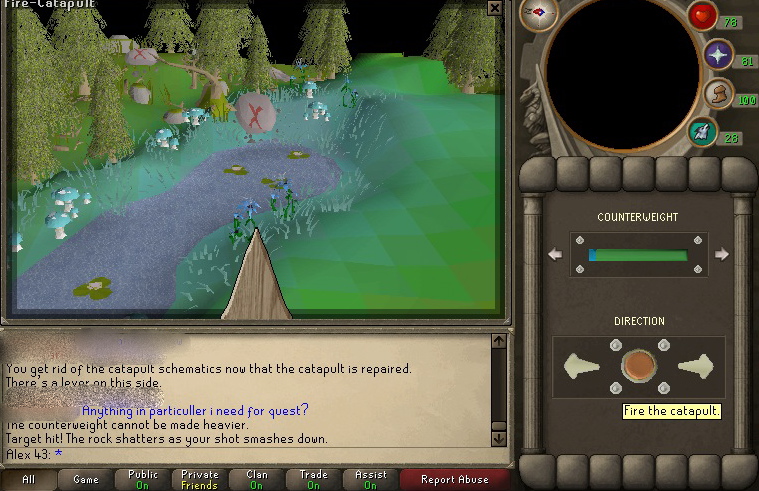 After some trial and error, or just plain skill, you’re done! 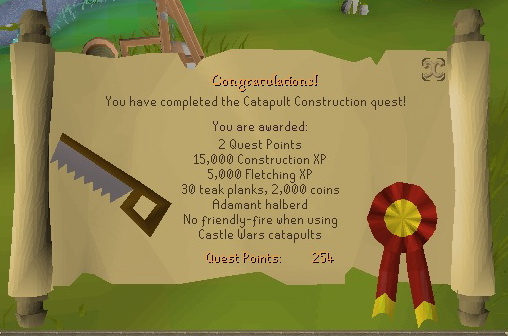 All done! A nice bundle of construction and fletching experience and some useful, though questionable items. 30 noted teak for your construction training, which is another 2700 construction exp, some coins, and … an adamantite halberd? I guess Jagex really want you guys to give it a try.

Well, since I already have one (adamantite prince for the win?), I sold it for another 3000 coins. Do what you will with yours.

Well, even though I’m not too disappointed with the reward, which involves a permanent castle wars upgrade and a nice big chunk of experience, I’m rather disappointed that no progress through the quest line was made whatsoever. Sure, we got to know General Hining a little bit, but otherwise it’s a real disappointment to whoever enjoyed the multi-quest series.

Also, I did enjoy the mini-game and puzzle, but the fact that I can only do it once also leaves me a little deprived. When I can, I enjoy the odd puzzle here and there, even completing Ali Morrisane’s rune sudokus for the cheap runes, but the majority of the puzzles of Runescape can only be done once, and that’s it. If I could, I would ask Jagex to at least make a number of those puzzles available with even a little reward at the end, just to give the mind a bit of a boost during the game. Runescape’s fun, but it does get a bit boring when all you’re looking at is an avatar chopping trees. I like the puzzles! Make them more available, Jagex!

Otherwise, the quest was alright. A few challenges here and there, and very straightforward, and like the other quests, there were a few points where I laughed at either the outcome or potential of one. Well done.