The Contact! quest sent you on your adventurous way to face the followers of Scabaras, making grim discoveries of death and intrigue beneath the desert. In Dealing with Scabaras there has been a reaction to these events, dragging you kicking and screaming into a tale of revenge and redemption.

Your journey begins with a mysterious corpse that needs identification – but all is not as it seems. Spurred on by duty and revenge, you will travel to uncharted eastern deserts – dealing with folk who are cautious, disreputable and stone-headed – eventually approaching your journey’s end. Here you will be confronted by a shadowy foe who requires you to be at the very peak of your powers.

Treasure seekers will find a new stomping-ground patrolled by strange creatures in the ancient ruins and desert sand. Can you resist straying from your path?

For many of you, however, revenge and loot are not the only rewards that inspire you, and there will be ample chances to gain the lost knowledge of the desert. What drives the followers of Scabaras to their violent ways? What exactly is Simon Templeton up to? Why are there so many archaeologists wandering the lands? Is Osman quite what he seems? You can hope to learn more about these mysteries as you busy yourself under the burning sun.
Remember to take water, or you may stay forever… 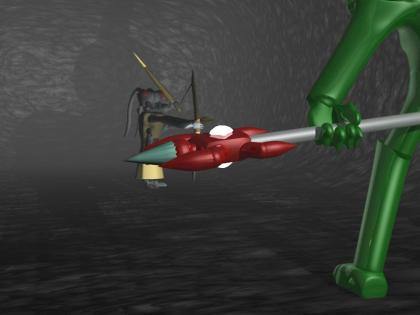 Please note that, before you read all of this, that there MAY, in fact, be spoilers to the quest, and thereby it would make more sense and convenience if you actually did the quest before reading this.

One of the more exciting quests, if you ask me. No getting fooled and betrayed this time, as seemingly is the main theme for the majority of the quests Jagex makes. Instead, this is one of those quests where action is taken so you can open up a valuable aspect for the other NPCs to continue a quest-line and ultimately strive for their primary goals. In this case, the reunification of Sophanem and Menaphos.

However, instead of helping the unity between the two cities, you are asked to avenge Kaleef from the previous quest “Contact!” by beating up the scabaras. And, of course, I’m sure you just love beating the tar out of a lot of bad guys, huh?

Well, the interesting thing is that there is a catch to the fighting. First, the High Priest of Itchlarin asks you to try to pacify the High Priest of Scabaras and try to negotiate a peace with him, as the Scabaras are enemies to Sophanem. If something isn’t done quickly, the city could get destroyed should they decide to mobilize, despite the numbers of them you slay.

Also, a team of archaeologists got to the hidden underground temple first, and in order to gain your trust, they put you through a series of trials. These involve solving math problems, fulfilling an artifact order from Simon Templeton, and gathering slips of paper from the local undead in order to fill up a notebook about the history of the scabaras through a series of diary entries.

And as if that wasn’t enough, there is a vault lock for the underground temple preventing you from getting in unless you are able to undertake a series of tasks without failing, all in a row, and without even logging out. They include an agility obstacle, a thieving puzzle, a large strength tester, and a giant, tough scarab to fight. Fortunately, as a handicap, you are able to manipulate the difficulty of each by a golem and a spare bundle of logs. However, the easier you make a certain task, the other ones won’t be able to be as easy. For example, if one chooses the scarab to have the greatest handicap, it will receive heavy additional damage, but the other tasks would be harder to do if they had been chosen the easiest. So choose the higher handicaps on whatever skill you’re weakest in.

Once you’re in, you must watch the floors and navigate through a series of tunnels to find the high priest. Once again, there are a number of ways to do it. Either you take to the thin, safer tunnels and use agility to avoid the traps, or you rush through the larger, more dangerous tunnels and risk scabarite magi, rangers, and lancers covering you in a fury of 8 to 10 damage each.

Once you meet the priest, it’s all a matter of … ahem, “forceful” diplomacy. Have a brief chat, and fight the progressively toughening creature over and over and over again until he gets so mad, he becomes sane and realizes he had been corrupted by the Devourer. He thanks you and gives his promise that the scabaras won’t attack Sophanem.

Sounds like you just made yourself an interesting little ally. Or a neutralized one, at least.
Return to the Itchlarin priest and get your very lovely reward – an item that allows it so you don’t need waterskins! Agility Pyramid, here we come!

Aside from the quest itself, there are also a number of mini-quests you can do. You can do Simon Templeton a quick favor, or you can continue your fight against the scabaras and fill your notebook with the 20 pages it needs for completeness to receive an award from the archeologists. You can even have a chat with Osman at the end for a quick laugh.
Remember to take water, or you may stay forever…

Lately, we’ve been seeing more of what I like to call “Quest Branching”, where quests have an extra addition that is discovered through subtle and concealed, though fairly obvious clues. The last quest, “Land of the Goblins”, offered an extra side-quest if one brought a ghostspeak amulet and ring of visibility to the chamber of the dead goblin priests. This quest offered a number of additional, optional tasks with the offer of additional, simpler rewards. Sometimes it’s just gold, sometimes it’s just exp, or sometimes, like the Curse of Zaros mini-quest parts 1 and 2, there’s an interesting, never-before-seen item offered at the end to show off and laugh at people with.

Personally, I like these additions. it makes a quest far more interesting, and makes me want to explore a little more in hopes that I might discover something that nobody else ever has. One thing’s for sure, though, we’re all going to have to get used to finding the rewards now.