Having travelled to the ogre town of Oo’glog, Balnea could not have expected such an irresistible business opportunity. The town may be full of annoying bugs and surly ogresses, but it’s also home to some rather miraculous pools!

These pools seem to have all manner of benefits to health and performance; with this in mind, Balnea has become determined to change the primitive encampment into a luxurious health spa! Unfortunately, managing a team of ogres has proven more of a challenge than Balnea bargained for and she could use your help to get the spa up and running.

It certainly won’t be easy: bugs circle the spa pools, the hotel owner seems to think that slabs of beef make good pillows and the local chef couldn’t rustle up the simplest of recipes. Resolve these issues, however, and you’ll have access to the full range of Oo’glog’s offerings, including shops, spa pools, ogre wigs, mud packs and the ability to trap three new Hunter creatures. Keen woodcutters will also find a new tree – the eucalyptus.

Where to start As a First Resort…

Speak to Chief Tess in the centre of Oo’glog.
Requirements to complete As a First Resort…

We’ve fixed an issue that sometimes caused players to appear to disappear in Clan Wars. This was only happening in some areas and has been changed so players won’t vanish anymore!

That’s because they banned me from watching them.
Ssh! Quiet, Dex!

The one-dose Zamorak potion wasn’t behaving in the same manner as the other versions. This has been corrected so that all doses give you the same benefits.

Rings of life will no longer teleport you out of Clan Wars when you’re low on Hitpoints. This is a safe minigame, so there was no need for it to teleport you to safety. 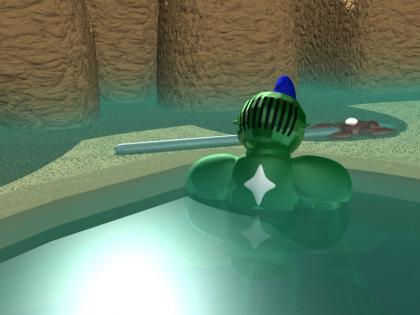 All right. Jagex have finally begun to show that they are, officially, running out of ideas. Either that or they’re eating too much ice cream during innovation-hour.

The potential spa is a whole new location, south the hunting grounds in Feldip hills. For newcomers, start at Castle Wars, travel south past the ogre coffins, and hug the west shoreline until you hit the black mass, and then proceed due east. For those more experienced, use the gnome glider to the Feldip hills, head straight south until you hit the wall, and east or west will get you in.

Beware of dog. And ogres. Bring some good armor and charge your prayer before starting.

Anyway, here’s how it goes. You start off by entering this enclosed village and talking to Chief Tess, Chief Tess … yeah, that’s her name. After a chat, you will enter the bank and talk with one of the most confusing characters alongside the chaos elemental when it comes to vocabulary issues: Balnea the Entrepreneur. Fortunately, your character is direct and intelligent, and will personally tell you what to do.

First step is to get the meat shop ready. This involves you chopping 10 eucalyptus trees and 8 achey trees, as well as giving her 4 un-poisoned spears (a word from experience; DON’T USE DRAGON SPEARS!) and two chompies that miraculously grow to the size of ogre children after being added, and finally lighting the whole mess.

After that, return to Balnea for your next task: the hotel. This one’s simple – deliver 8 striped feathers from the tropical wagtails (just gotta catch one, or they’re even tradable), and you’re done that part. Easy.

Next, you need to help the manicure station get some tools. 4 wolf bones and 8 larupia furs will do the trick, tattered or fine. Third part complete.

It gets harder now. Your next task is to get rid of all the flies around the pools so it’s more pleasant for non-ogres to bathe in. To do this, you need to light a combination of eucalyptus logs and plants to force them away. However, the ogre children played a prank, and swapped some of the colors of the different markers around. Fortunately, with several trips to the fields just outside the east of the village, one can solve the puzzle and find out which rock stands for which. The female ogre kids will give you some advice, while the majority of the male ones will laugh at your face.

For me, it was:
Yellow: Lavender
Red: Primweed
Green: Tansymum
Purple: Stinkbloom
Orange: Fever Grass
Brown: Eucalyptus (Guaranteed for all, of course, so get ready to chop some more …)

Most likely it’s different for you, but you get the idea.

Just when you thought it couldn’t get more annoying, it does. Your final mission is to clear out all the 3 species of pests around the city by luring and trapping in synchronization. Pay Yanille a visit and grab yourself a bird snare and box trap (only one apiece, because you’re only allowed to set up 1 trap at a time within the city), and then get to work. You’ll be told that certain creatures like some scents of burning plants while others will attack you to the same scent. To do this, de-equip yourself and use a tinderbox on the desired plant to burn it and get the pests to follow you either into a baited dead-fall trap (baited with the same plant), a bird snare, or a box trap. Of course, when you burn the plant, it’s only a matter of minutes before it’s completely burnt to ash and you have to light another.

Birds and kebbits are easy enough to ‘destroy’, but the platypus creatures aren’t. Instead of killing them, you have to box them and release then at the eastern section of town, near the reeds. Doing this will present you with a neat little releasing and rewarding, as each platypus will toss you a little surprise upon release.

Once it’s finally all done, one final trip to Balnea for the Grand Opening!

As a reward, you can use the pools free of charge! Bonus!

The rewards are amazing. 15 000 exp in a number of skills, like hunting, firemaking, and woodcutting for about an hour of work, as well as access to the pools, a few new huntables, a new pet, a bank, a store, a couple of hats, and even a mud facial … well, sort of. It’s one of the craziest quests I’ve ever tried, with one of the greatest rewards I’ve ever received. Definitely worth doing. A pity there’s no real teleport to get there, save for the rather expensive charter boats …

Here’s a list of the different baths and benefits:

Mud bath: Boosts hunter around 8 points. Also boosts the chance of a successful hunt for a little while.
Thermal Bath: Restores and boosts hits. Also cures disease and poison completely and makes you temporarily immune to disease.
Salt-Water Bath: Restores run energy and, apparently, it gives you infinite run energy for nearly 15 minutes. Really! Good for rune-running and long trips.
Sulphur Bath: Restores and boosts prayer points by 8! Awesome for barrows and God Wars … and pretty much everything in between!
Bandos Bath: Apparently, if you bathe in it, then nothing that worships Bandos will automatically attack you. Ogres, jogres, orks, and everything in between. In theory, this INCLUDES General Graardor and allies, but it’s yet to be tested. No idea how it can be, though. Still, quite interesting, and the effects last about 15 minutes or until you actually engage in combat. Sounds perfect, but it’s not too great because it won’t have much use in the God Wars dungeon.

There’s also the ability to purchase an ogre wig for 50 coins from the hairdresser Kringk, a Davy Kebbit hat (Uh?) from Freud in exchange for a diseased kebbit fur, and a lovely mud-mask from Muggd. Thump even specializes in lovely massages … but, uh, she unfortunately is a little too busy on a paying customer to give you one. Maybe later.

Well, I personally think I’m going to find good use for the benefits of these pools, especially the salt-water one. It’s excellent for fighting the giant mole, as it will let you get around quickly, as well as traveling through out-of-reach places like the Underground Pass, the desert to the Kalphite Queen, Seers Village to Relekka, and getting around the wilderness. It only partially helps in the icy regions, as your energy will go down to zero, but then suddenly shoot right back up to 100%, so you can run half the time if you hold down ctrl. So far, I haven’t really figured out a real use for the Bandos pool, although I’ve yet to test to see what other sort of benefits it has besides pacifying those ogresses so you can chop the eucalyptus trees in peace.

The other rewards are somewhat promising; if you catch a platypus and release it near the reeds, you get rewarded with either an oyster or casket, and if you catch a baby one, you can even raise it as a pet. … a very intelligent, though hungry one. Bring a net with you, because it eats raw fish and lots of it. You can sell the hides and feathers from the wimpy birds (yes?) and kebbits at the store, but I haven’t yet tried making hats out of them yet. You can give the diseased kebbit furs to Freud, the shop owner, and he’ll make hats with each of them for you.
Again, I’m glad Jagex gave us an interesting quest with lots of humor points and a very impressive reward. It’s a well-worthwhile quest, and is recommended for anyone and everyone to at least try.