The next ten years of computing

If there’s one thing people fifty years ago were bad at doing, it was making predictions of now. In some respects they were way looking way too far into the future. They thought we’d all have laser guns, bubble houses on the moon, and spaceships to take us far into space. 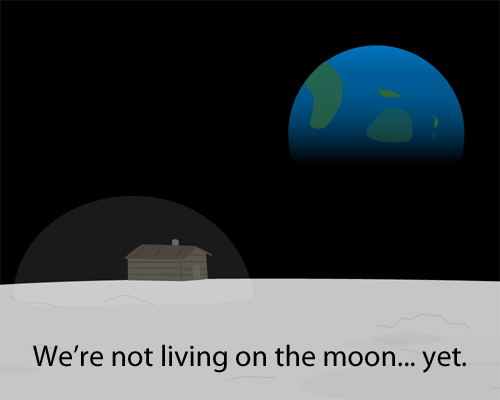 But when it came to technology, their predictions were somewhat different… they were looking the wrong way. Yup, the wrong way. There are so many visions of what computers will look like, from the 50s and 60s, of what today’s computers would look like, and almost all of them still had some kin of horrible printer to display data, they were made of a few hundred different parts, they would weigh a tonne, or use up an entire room. Popular Mechanics, a magazine from the day, published an article which said,

I don’t know about you, but my computer certainly doesn’t weigh 1.5 tons, and there isn’t a vacuum tube in sight. In fact, mine only weighs 2.5kg.

Although their ideas were fairly rational. No-one really had any idea how quickly computers would develop, and being honest I don’t think anyone from those times knew how important computers would be to our lives in 2007. Here’s an example to illustrate the point of quick development.

This is a computer Apple made in 1983. It’s called the Lisa, and came with a new floppy disk drive (rofl), a 5mb hard disk and a 5MHz processor. 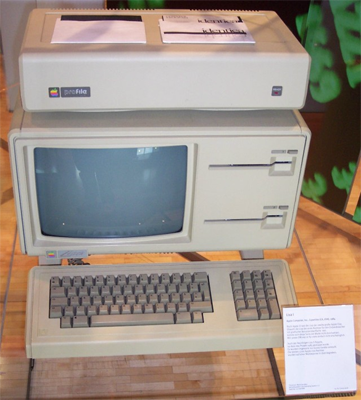 See that box on the top? The really huge one which looks like it would fit five computers in nowadays?

Yep, the hard drive. Nerds in Japan and America have made hard drives which can fit on the tip of your finger. Your laptop has a hard drive just 2.5 inches wide in, and a desktop HD is only 3.5 inches wide. iPods have hard drives, too, little 1.8 inch wide ones. There is no way anyone back in 1983 would have imagined a 1.8 inch hard drive. And look at the space difference. More than a foot wide fit just five megabytes. I have single songs bigger than that. The new iPod classics can fit 160GB on now.

Related to this kind of thing is something called Moore’s law. It states that, roughly, every 18-24 months, the processing power available for X amount of money will double. It turns out this was a fantastically good prediction, and in fact computers have basically followed this trend for the last 30 or 40 years. The same kind of rules apply to hard drive space, number of pixels on a monitor, the FloP power of graphics cards, and many other things in computing.

But all of these things are an exponential growth, and predict increasingly more powerful computers in years to come. 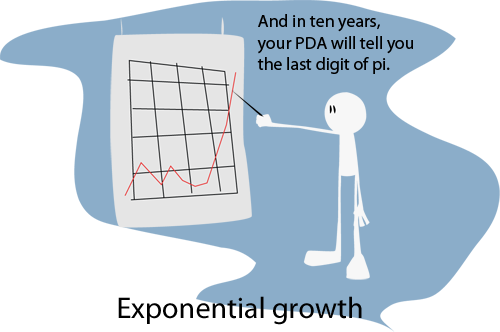 So, what’s coming next? In the next ten years or so?

No-one can say for certain, but there are certain things that are very likely, if not certain to take off to an extreme degree. The spec of your computer is one of them. I’d make a guess that in 2017, most people have computers that have processors with more than 50 cores, hard drives in the range of terabytes rather than gigabytes, and more than 10gb of ram. You might think these ideas are stupid or extreme, but the same kind of thing happened ten years ago.

In the mid 90s, a university student looked at the trends of RAM amount in computers over the years, and came up with the conclusion: computers in 2006 or so would have 1GB of RAM. The whole computing community called her (I think it was a her) an idiot. No chance, they said – peoples hard drives were hardly bigger than a gigabyte. You could fit your entire collection of programs then within a gig. It was simply unthinkable that computers would have a gig of RAM.

So, if in ten years I can fit all my applications and room to run them all in RAM, that would mean I’d have about 12GB of RAM.

We’ll see how it turns out.

So enough about computer specs, what other tecnologies could we see in ten years time?

Well, to do this, we can take a look at technologies that are currently emerging. Here’s the first one.

Computers now use one mouse, one keyboard. Some people are lucky enough to have a touch screen, allowing you to interact in a slightly more direct way with your computer, but still, it’s not the ideal setup.

Then along comes the iPhone. Along comes Microsoft surface. Along comes Unix MPX, or the Multi-point X server. You can now interact without just one little cursor to point and click, you can manipulate things on a surface in a more real way. MPX allows you to use more than one mouse with one computer, and have a cursor per mouse. Heck, if you wanted to, you could have 20 or more mice, but that’s a little extreme. 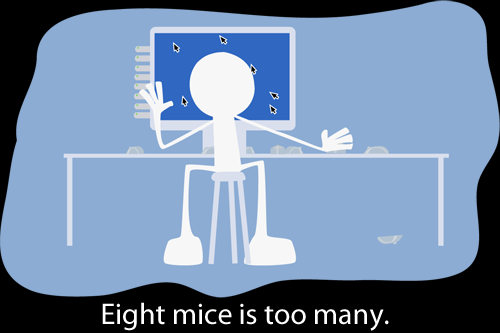 And Microsoft surface and the iPhone allow you to use two or more fingers to interact with the computer. These technologies will only flourish and possibly develop further into more advanced forms of computing, possibly something like the 3d computer navigation used in Minority Report.

The entire world is already connecting. More and more people every day join the giant network of computers we call the Internet. The interent is getting faster and faster, joining us together in ever more ways. We’re gaming, social networking, discussing and debating. And there are ever more ways in which we are connecting – not necessarily just the internet, but within our home. A standard called UWB has just been approved, and should be developed further within the coming years. UWB stands for Ultra Wide Band, and is basically 2 gigabit wifi. Of course, not everyone is going to have 2Gbps internet, but transferring things between devices in your home will be one heck of a lot faster, from things like iPods to computers to your TV, and without all those horrible wires everwhere. Those of you who use gigabit LAN in your home will know how fast it is. I do between two of my computers – and I can transfer my entire music collection in eight minutes. Double the speed, and make it wireless.

HCI is Human-Computer Interaction, and is basically the study of how humans interact with computers (quite obviously). If you look at Microsoft Office 2007, the upcoming KDE 4, or Mac OS X, you can really see some brilliant innovation in making software more intuitive, more logical – not moulding the user to the software, as has been the norm through many previous generations of software, but moulding the software to the user, with the ultimate goal of making a piece of software everyone knows how to use. No manual. You’ll be an expert in half an hour.

Look at Mac OS X, and you’ll already see a very intuitive interface already. Where are applications? On your hard drive, in the directory ‘Applications’. Want to modify a pic you got in an email in Photoshop? Drag and drop from the email message to Photoshop. Other operating systems and desktop environments are catching up to some extent as well. Of course, Linux lags behind with one heck of a horrible filesystem, but I won’t hold it against them.

Of course, there will be so much more the next decade of technology will bring us. Another version of Windows, and a few more of Mac OS. We’ll have to wait and see.