Manya’s Mayhem – Is there even a purpose to fate?

Manya’s Mayhem – Is there even a purpose to fate?

KING BLACK DRAGON GOES MENTAL
A word of caution to the many adventurers and clans out there – go fight the King Black Dragon, will you please?
After being overwhelmed by boredom and starvation from a shortage of adventurers, the King Black had gone mental and performed a number of questionably awkward actions resulting in its own desperation for attention.
Nothing inappropriate for the papers, though, no worries.
Because of new and improved fighting games like Barbarian assault, Pest Control, Castle Wars, and the Fight Arena becoming the center of attention for clans and adventurers alike, nobody ever wants to fight the used-to-be-popular creatures like the Chaos Elemental and the King Black Dragon.
While the chaos elemental has hardly been effected by this notion and has instead adopted to being the voice in the Hangman games, it wasn’t long before the King Black Dragon began to show symptoms to what he doesn’t want us to call ‘boredom’.
He started by pacing, then chewing on random objects (no newbies were harmed in the writing of this paper), and even began to break down in his sleep (Dex told us a story of how he witnessed the King Black convert the Saradomin statue north of Falador into a large stone dragon tongue in between snores).
Then, on the 19th, he finally snapped and went mental.
He ran around the land lopsided while looking like this. 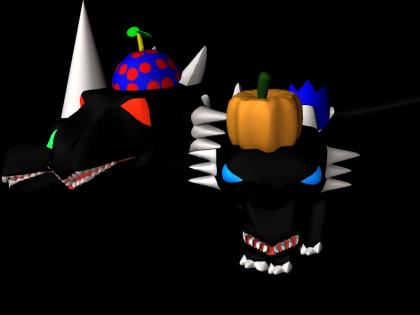 He popped up in Falador several times muttering the lyrics to bards no one listens to without a tone, tried to carve the face of Agarathra into the White Wolf Mountain but quit because the rock was grey instead of white (seriously, what’s up with him and carving stuff?), and even unsuccessfully attempted to light Yanille on fire with a tinderbox and several oak logs.
Almost makes you hope he recovered to his town-destroying, rampaging, anything-eating self.
Well, fortunately he did.
After a brief encounter with Dex in a bad mood (now in a 12-pack), he got snapped back and reverted to his normal self by means too indescribable for description.
He is now back to his normal self, but we are not sure how long he’ll last this time before he goes off the deep end.
So for those concerned, do him and the rest of his brethren a favor and kill him.

DEX GETS INTERVIEWED
The following is an interview with Dex by that quizmaster from Odd One Out, who is famous in all 4 kingdoms but no one knows his name for some reason.

“Good morning, everyone. Today, we’re here with one of the heroes of the Eastern Project War, Dexter Sonar-”

“I’m sorry, but this is a professional interview. It is tradition to call people by their full first names.”

“It doesn’t really matter, does it?”

“You were the one who beat the everloving tar out of Psychos- WHAT did you just call me?”

“Because you have an ugly face.”

“No, it’s NOT. I have a bunch of reviews that say that I have one of the most attractive faces in Runescape!”

“One thousand, three hundred sixty two people who watch this show wish they had a face like mine because it’s so handsome!”

“That’s because they’re uglier, but not by much.”

“Well, you wouldn’t know, would you? Your face is ugly just the same.”

“Why not? It describes you rather nicely!”

“I mean that by calling you ugly-face, that it describes the physical representation of you in full detail. You have a face, and it’s ugly.”

“Well, how can I explain this? It’s ugly. Unappealing. Totally resistible. Fatal to the coincidental viewer. The reflectance of the combination of multi-colored light bouncing off your facial skin into the eyeball lens of the beholder and traveling through the cranial nerves causes unintentional bleeding in the brain. Your face … is a DISASTER to society and a MENACE to all that can see stuff. … that’s how.”

“That’s the truth and I speak it. Accept it, ugly-face.”

“It’s not the truth. I should know if my face is ugly or not.”

“But you don’t. Don’t you see now? The rest of you is also so ugly that you think your face is beautiful.”

“Ok. You’re an ugly-face. Say good-bye to your ratings due to the fact that you kicked a world-class hero off your own set.”

“… you’re not going to call me ugly-face anymore?”

“Well, since I don’t know your name, I hardly had much choice.”

“Ok, then. Melvin, you’re an ugly-face. There, that should make it less confusing as to who I’m referring to.”

“Oh wait, I got a better idea. Can I call you ugly-face instead of Melvin? I like that name better.”

“Ok, fine. Thank you. I won’t call you ugly-face anymore.”

“Whew. Glad we got over that. Now then, you are well known as the hero who-”

“Yup, it looks like it. That was fun. Thanks for having me on, I had a real good time.

“But we didn’t even do an interview … ok, fine. That’s OK. At least you won’t call me ugly-face next time you’re on.”

That was the interview with Dex, which won’t be scheduled to continue for a long time.

DEX GETS INTERVIEWED AGAIN
… only joking. Maybe next month’s issue, we’ll get him to at least answer how old he is.