Welcome to the Internet

Welcome to the Internet. I hope you enjoy your stay.

But… what is the Internet?

Well, first, i’ll just confirm that is it not a series of tubes. 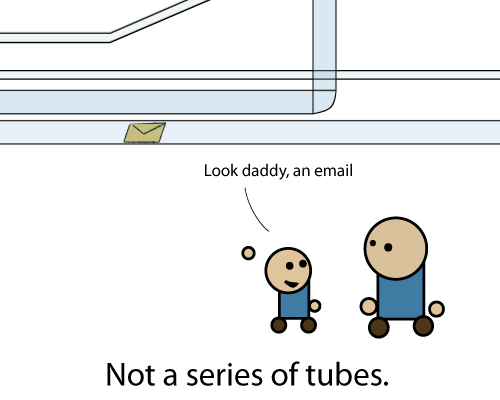 You can, however, see its effects. Like you can see the effects of an invisible laser beam of death. 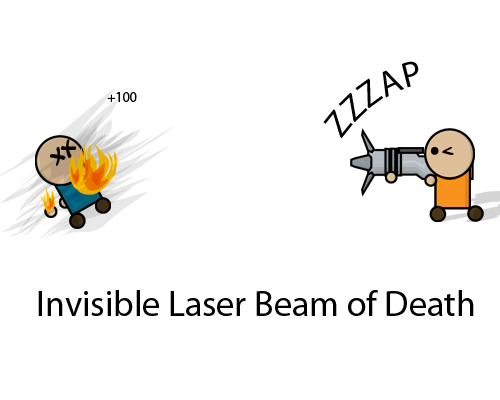 To me, however, and many others, the Internet is much more than just a series of connections, just like speech is much more than a few vibrations in the air. The internet is a huge community – well, many communities. A chance for people on opposite sides of the world to discuss things that they like, when normally they wouldnt be able to.

Welcome, to the Uniting Meritocratic States of the Internet.

Yes, I did get that first word right. There are many issues in which the whole Internet is not united, but it does unite people from all over the world – it is uniting.

The next word, Meritocratic, comes from Meritocracy. The -cracy suffix means ‘rule by’ then whatever comes before that is who rules. For example, demo-cracy means rule by the people. A pluto-cracy is a rule by those with the most money. Merito-cracy is literally the rule by merit or skill. In the internet, those who have the most knowledge, and are willing to put it to use, are the ones who rule. Those who have knowledge and are willing to help are revered and called upon to help and teach. Those who are willing to learn and teach themselves are respected. Those who lie about their skill, their ability, and their talent are not. Basically, it’s a system where you’re governed by nerds. 8)

I know this is an obvious term, but I’ll take a look at States. States rather implies that the community of the internet is divided a bit, and it is. There are various categories of websites on the internet, the main categories being technology (693 million google search results), gaming (451 million), religion (‘god’ gives 347 million), general hobbies (‘hobbies’ brings 112 million), social networking (social network gives 359 million), random miscellaneous stuff, and… well, you all know what (begins with ‘p’, and gives 103,000,000 results). Each of these categories, also, are divided into ‘Deep Web’ and the readily available web. For example, for technolgy, it is rather easy to find out that a security flaw has been found in Windows, and that exploit code is somewhere ‘on the internet’. Finding the exploit code, however, is incredibly difficult, and lies within the ‘Deep Web’.

Enough of the explanation, now to go on and explain a little more. The Uniting Meritocratic States of the Internet (I’ll just call it the internet from now on) is more than just a collection of connections and servers. It is much more than that. The Internet is a community. A vast community of people who share beliefs, interests, and talents. But, as I have already explained, the internet is quite different to any other country system. There are a few basic, main things that are very different:

On the internet, much more than in real life, people believe strongly in equality of race, religion and personal beliefs. If someone is black or white, it makes no difference. If someone is Christian or Muslim or Jewish, it makes no difference. As I have explained, the Internet is a place where people are judged by skill and reputation. None of the trivial things like race or religion make a difference to how skilful or talented someone can be. And so it doesn’t.

Unless you’re in the world’s biggest library, standing right next to the book you happen to need, accessing information on the internet is far easier than accessing it in real life. Wikipedia and Google are just a few clicks away, and each of them can give you an incredible amount of information which either isnt available in real life or is very difficult to get hold of in real life. What’s the lowest note on the common Contrabassoon? It’s Bb0, apparently. That took me 10 seconds to find with Wikipedia. It would take me hours to find that out in a library. 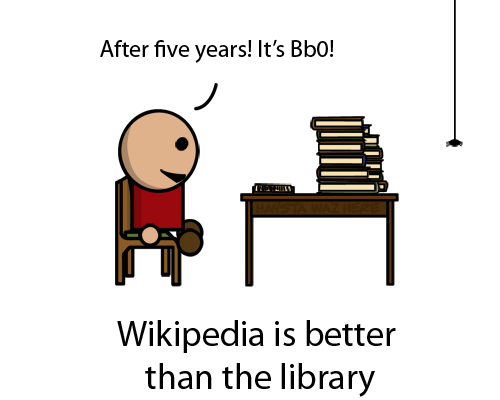 3. People are closer together.

Try finding someone in the street who uses Linux. You’ll probably have a fairly difficult job, although out of a few hundred, you may find one or two. Now, try and find a thousand Linux geeks, all talking to each other and discussing things. Unless there is a random Linux conference in your area, it’s basically impossible to find such nerds. Not on the internet. Here, people can come together from all over the world and discuss the things they love (or hate), when they probably wouldn’t be able to in real life.

This is literal, whereas number 3 is about community. People on the internet are further apart, and as such there is a kind of shield between people on the Internet. When someone is a complete annoying moron in real life, they often get beaten up, insulted, or at least occasionally punched in the stomach. On the Internet, you can’t do that. As far as I know, the technology does not exist to deliver Karate chops or face punches through DSL lines. 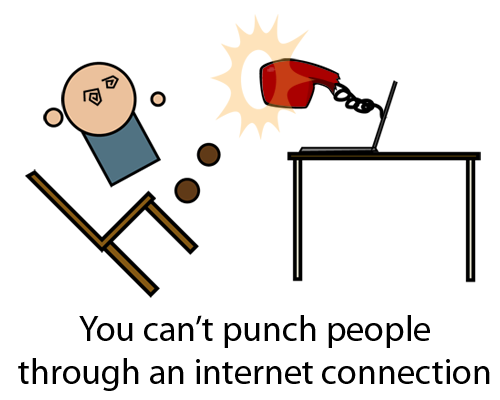 The internet is in many more ways different to real life. However, for now, I’ll leave it at that.

Now, it’s time for something rather important. Rules. Don’t groan, they’re rather necessary – as guidelines, anyway. Rules and laws make the world go round (rather literally), and in the case of the internet, if there weren’t some basic, unwritten ground rules, nothing would progress. The internet would erupt into chaos, no-one would be able to understand each other, no-one would be able to believe anyone else, and the whole place would be an absolute mess.

It’s time to write some of them down, I think.

This is a rather broad rule, but probably one of the more important ones. Communication is one of the most important parts of the internet, and as such you must ensure that everything you say or write must be understood easily by everyone. Punctuation makes a difference, as does capitalisation and various other factors.

You are not friends with Zezima. You do not have five billion GP. You are not in a clan that has fifty thousand members. You are not going to be given four hundred sets of full dragon armour by anyone. Don’t say you are. It makes you look like an idiot.

Generally, lying on the Internet is a bad idea. Often, in real life, you can lie or exaggerate something and no-one will notice, because people may not know anything about the subject. On the Internet, however, where information is freely available and it is easy to find whether someone is right or wrong, there is a greater chance of you being found out. If you dont know something, admit it, and someone will probably tell you. Dont pretend to know something that you don’t know. And dont pretend to be or have something you dont, either. You dont have four Mac Pros and a cluster of Xserves. You dont have a huge mansion with a nuclear bunker. Put it this way: if you did, you probably wouldn’t want everyone knowing anyway.

The most important thing you should never lie about is skill. Saying you can program OOP C++ is a really bad idea if you can’t. At some point, you’ll be asked to prove it in some way, then the embarassment and complete loss of respect amongst others follows. On the Internet, the respect you hold amongst other people is your most valuable asset. You cannot afford to lose it. And lying about skill is one of the fastest ways to do so.

Try not to make enemies out of people, and try not to do anything that will make people dislike you. If you’re in a community, you’re there because the others there share a common interest. We should, in theory, all be friends, or at least friendly. Obviously there are going to be slight differences between opinions, but do not let them make a difference. To make an example, I had a rather heated debate with someone on the forums several weeks ago about religion. We had completely different views, completely conflicting, and were arguing a lot about it. However this did not make any difference to the Round-Robin in which we both participated.

Obviously some people are just annoying. Some people lie a lot. Some people can be power-hungry or power-crazy or have a huge ego and think they’re the best in the world, and these kinds of people are annoying. You dont have to like people. Just dont make explicit enemies with them.

4. Help, and be helped… but Google and Wikipedia are your friends.

If someone needs help, help them. People appreciate help more than you might imagine, and every time you help someone, the respect they have for you will grow. Help whenever you can – sometimes this will require a large amount of research, as I found out when I started my tech questions just a few months ago (which were unfortunately cancelled due to inactivity).

If you need help, however, there are a few little ground rules beforehand. Remember, the Internet is a fountain of a fantastic amount of knowledge, and many answers are just a few clicks away. Look on google, look on wikipedia. Chances are you’ll find the answer faster anyway, and asking a million silly questions that are just a google search away can annoy some people.

5. Dont beg.
Most people here will know how incredibly annoying the silly little level 3 noobs are when they beg. ‘PMFG GIV ME FREE MONIES!!shift+one!!!’ they cry, desperate for some money or armour or whatever they may need to complete cooks assistant or get into Al Kharid. We all know it’s annoying, so don’t do it. Just don’t. It makes you look like a bit of an idiot. If you want respect, if you want money, if you want a moderator place on a random forum you are not going to get it by begging. And in the rare occasion that you do, and people find out that you begged for the place, you will find that you rather quickly lose a lot of respect with people.

This is possibly one of the more important points I shall make today. If you want to move up in the world of the Internet, you must learn. Learn, learn, learn, and keep learning. Keep up-to-date with current events and updates. If you’re a runescape player, you’ll know that it is rather important to know about the latest updates, and how they affect you. Pest control has been split into three level categories as of a week or so ago. Congratulations, you just learnt something. If there is something you don’t know, learn it. Don’t know how to use Photoshop? Learn. Don’t know any HTML? Learn. It’s a rather simple instruction, really, but one of the most important in a meritocratic society.

I hate writing conclusions. But for the sake of it, here’s the whole article in three sentences: The internet is different. Here, we value intelligence and knowledge. Learn, help others, don’t make enemies, don’t lie, and everything will be fine.

Welcome to the Internet. I hope you enjoy your stay.