Apps of the Month – RSS

So, I am sure we have all heard of RSS. But what is it? What does RSS stand for? And what’s this Atom I keep hearing about?

RSS: Stands for Really Simple Syndication. RSS is a way of staying up-to-date on all your favourite web content, whether it be blogs, webcomics, whatever.
Atom: Is basically the same as RSS, but the code behind it works in a slightly different way.
Feed: An RSS or Atom feed is a special xml file found on many websites which will update with updating content. You can plug this xml file into an RSS reader, and it will read it and give you content as it is updated.
Feed Reader: A program designed to read the code of an RSS or Atom feed, and give you content that isnt a load of unreadable mangled gobbledegook.

So how do I get these feeds? What’s the point?

The point is that you can get a message as soon as your favourite sites are updated. Instead of checking them every five minutes, you can get your feed reader application to check for you every five minutes, and when it has been updated, it will tell you. This is also good because all your favourite content is in the same place, meaning you dont have to open a million bookmarks every time you want to check if something has been updated.

You can get feeds through a feed reader application, an online feed reader, or through rssfwd, a service which emails you all your feeds.

How do I know if a site has a feed?

The rather universal icon for a feed is this:

Just look around for that icon, and you should find a feed relatively quickly. Most feeds end with either .xml or .rss or something along those lines. If the site doesn’t have that icon, it may have a link to an RSS Feed, which is what you’re looking for.

Now, this is apps of the month. It’s time to actually get some apps mentioned! I’m going to talk about my favourite readers – firstly those built into browsers, then online readers, after that, dedicated readers for Windows, Linux and Mac, and lastly rssfwd. 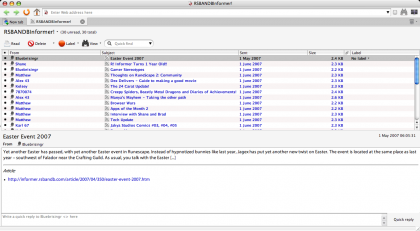 Those of you from the forums will know I do like Opera as a browser, and its RSS is very nicely done. It is built right into M2, the mail client within Opera, and acts much like it were email, with different feeds appearing like different accounts in an email client. This is not perfect for all people – overall it isn’t a particularly feature-rich RSS reader, unlike the rest of the browser, although some people do prefer this over the way Firefox, Safari and Internet Explorer organise things.

Rating: 7/10 – A good, solid feed reader, but without the features of many other readers, and organised in a way that will not appeal to all people. 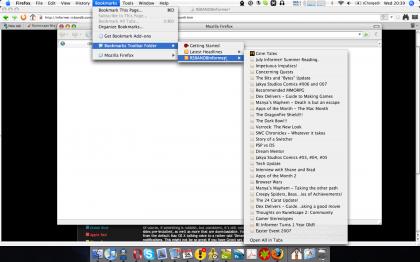 Within Firefox, feeds are referred to as live bookmarks, and are integrated more into bookmarking than any kind of mail system. Again, this is not for all people, but is quite an elegant way of organising things. As new articles appear, new bookmarks will appear, and you can then access each feed item just by clicking on it, just as if it were a bookmark you had previously made.

Rating: 6/10 – A nice way of doing things, but it isn’t so much of a feed reader as the others. Won’t appeal to all people. 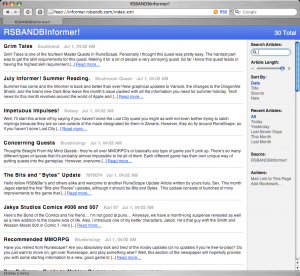 The system within Safari is rather similar to that of Firefox, using a system of live bookmarks. A page is rendered by Safari which shows the most recent few articles, but again, it isn’t really much of a feed reader.

Rating: 6.5/10 – Slightly better than Firefox, but still not really of the same style as dedicated feed readers. 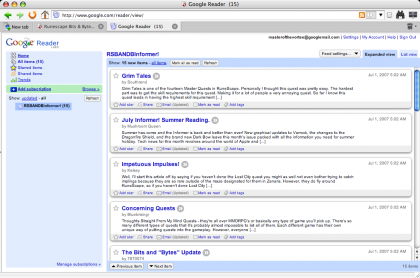 Google reader is a relatively neat web-based feed reader with quite a few features, and will suit many people. It is web-based, which has the advantage of updating your feeds even while you don’t have the client open, which is especially useful for very active blogs which limit their feeds to 20 items or so. Its interface is quite like Gmail, for those of you who use that for their email.

Rating: 7/10 – A relatively solid feed reader. The interface isn’t liked by all, and it can be quite ‘clunky’ sometimes, with ‘Loading’ boxes all over the place. 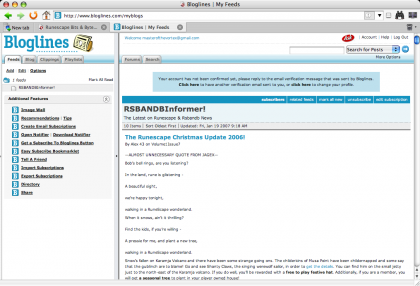 Bloglines is similar in many ways to Google reader, and has quite an attractive interface. There seem to be some problems right now with it not updating itself, although that might just be me, or might just be the Informer feed (I’m not getting any article in past February’s Informer :S )

Rating: 7/10 – Some people will prefer over google reader, some may not, but they both do the same job. Doesnt seem to want to update the Informer feed right now… 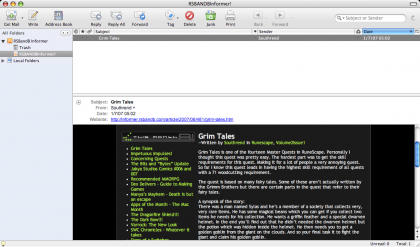 Many of you may already use Mozilla Thunderbird as an email client, and that is what it is primarily designed for. Thunderbird, however, also has a feed reader built right into it, and you can recieve feed items just as if they were emails. This is especially good if you want all your email, feed items etc in one place. Instead, however, of displaying content from the actual feed, like many other feed readers, displays the actual site the content is from.

Rating: 7.5/10 – A pretty good email client and feed reader. The fact it displays the actual site rather than the feed content, however, can be annoying. 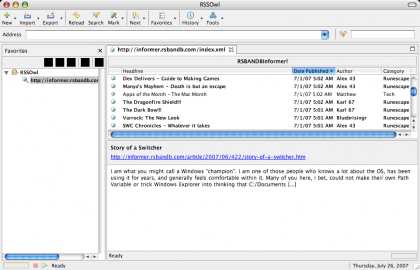 RSSOwl is the first really dedicated feed reader I’ll look at. It is cross-platform, and is pretty much the same across all platforms. It has a built-in basic browser which allows you to view the actual website where a feed was posted from, although the feed reader seciton itself just displays the content from the actual feed. This is quite a useful system if you want to view content from a feed quickly and easily, but if you’re like me and prefer all websites and things to be within the browser, this isn’t so great.

Rating: 8/10 – A very nice feed reader, although the built-in browser can be annoying if you prefer all content to be in your main browser. 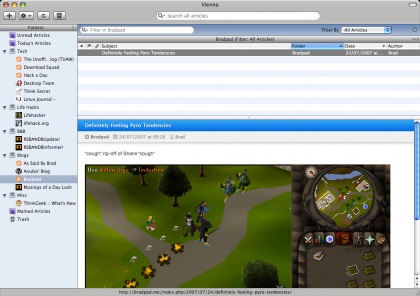 Vienna is a full-featured RSS reader for Mac OS X. It, unfortunately, is not cross-platform – Mac OS X only, but all the Mac users who are reading this should definetely consider using it. Vienna is the feed reader I use, and even the Beta version is very stable and solid, with many options, a built-in browser (which you don’t have to use if you don’t want to), and a clean interface which fits in well with the rest of Mac OS X. Vienna shows the content from the feed itself, rather than the site, and this content is actually customisable via the use of various skins. (Some Screenshots: 1, 2, 3)

Rating: 9.5/10 – I can’t really find any flaws with it, being honest, although many operations are very reliant on the menu bar, rather than the main toolbar, which can occasionally get annoying.

And last but not least, RSSFwd.

RSSFwd is a service which reads your feeds every hour, then forwards them to your email. Just get the url of a feed, put your email address in, and every time a feed is updated, you will get an email with the feed item’s content. This, again, is exceptionally useful if you want your feeds go to same place as your email, because they are your email, and whatever email service you use, you’ll be able to access them.

Rating: 9/10. An exceptionally useful service, which I used before finding Vienna.

RSS and Atom are big parts of the modern web. It doesn’t matter which service or program you use, but RSS and Atom feeds are exceptionally useful for staying up-to-date with online content.