Story of a Switcher

I am what you might call a Windows “champion”. I am one of those people who knows a lot about the OS, has been using it for years, and generally feels comfortable within it. Many of you here, I bet, could not make their own Path Variable or trick Windows Explorer into thinking that C:/Documents and Settings/username/ was actually now drive W:. How about converting a file system to NTFS from FAT32? Easy.

If you don’t know what any of that means, don’t worry about it. 90% of people probably don’t.

I desperately fanboyishly whined at my parents at the age of 11 to get Windows XP. Windows 98 was great, I thought, but Windows XP! I’d be the envy of all my nerdy friends.

Despite what I nerdily thought then, it’s starting to grow old. It’s getting aggravating. Crashes and various processes screwing with important libraries on startup as well as various other things have started to get annoying. I swear svchost.exe hates me.

Mac was always there, always in the back of my mind, but never really came across as a viable alternative, partly due to the fact I had only used OS 9, and that was quite horrible. There were also few games, only a few of the same apps and things. Over time, however, Mac looked better and better – after Apple released Tiger, then subsequently switched to Intel, it just looked better and better. Of course, the inevitable ICBM jokes had to appear (Intel Chip Based Mac vs that very large kind of nuclear weapon). 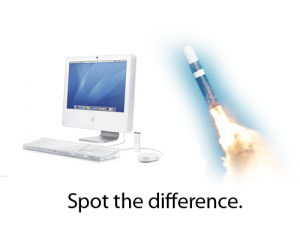 Apple’s decision to switch to Intel raised the thought – surely Windows could be run on it at some point?

*Gasp*, I thought. Well, I didnt, but it makes this article sound a bit better. I could run Mac OS X, then if I ever needed to use any Windows program, I could just boot up in Windows and run it. Mac will finally be a viable alternative.

This, ladies and gentlemen, is the story of a switcher.

So, how to go about this task? What mac do I get? What software will I use?

The decision of what Mac to buy made itself very easy early June, when Apple updated their Macbook Pros. 2.2GHz processor, 2GB RAM, 120GB hard drive, and all an inch thick. Perfect, I thought. Software – well, plenty of my software is already available on OS X, because of the things I typically use the computer for – Dreamweaver and Photoshop have Mac versions, as well as Opera, iTunes, Skype and others. I have been reading TUAW and Lifehacker for a while now, and they have some very useful mac applications featured on there.

Now to sit back and impatiently wait.

That fanboyish anticipation which I had six years ago with Windows XP has manifested itself now in getting my Mac. I’ll be the envy of all my nerdy friends… in a few days.

Day of arrival, and I get a large brown cardboard parcel. Open it up, and there is a pristine black box, just like the box you see iPods packaged in. Apple really do know how to package things. Open it up, remove some polystyrene, and the Macbook greets you from within its protective sleeve.

Of course, being the fanboy I am, I couldn’t wait one minute. I plugged it in and fired it up. The Apple logo appeared, and a nice setup menu (which, I might add, is better than XP’s one, with Beryl-esque 3D cube effects) takes you through some basic things. Once loaded up, the interface is clean and fresh, consistent across applications, without being pointlessly resource-intensive (*cough* Vista), ugly boring grey (*cough* Windows 2000) or a really horrible bright blue (*cough* Windows XP).

Transferring files really was as easy as Apple said it would be. Plug the ethernet cable in to both computers, set up some folder permissions on the windows comp, use ipconfig to check the ip address, then transfer it across just as if it were on a flash drive – appearing on your desktop and in the finder (the Mac equivalent of explorer).

I’d just like to get this next thing out of the way. It’s going to anger the Windows fanboys, and please the Apple fanboys to hear it. This laptop, and its operating system, are the best I have ever used. Everything is thought out, operates fantastically, and just works. Expose, the view of all your windows just by performing a predefined action, is the most useful thing ever. View desktop is equally as useful if you want quick access to files or folders on your desktop. The file system is logical and organised. Front row is a simple, but effective media system, not unlike the iPod interface. And as for the design of the actual laptop itself – the fans are on the top of the Mac, under the speaker grilles, not the bottom like almost all other laptops, allowing for better ventilation. The Caps Lock key has its own little light on it to show when it is on. In dark conditions, the keyboard automatically lights up with LEDs behind the keys. The power connector is magnetic to stop the laptop being yanked off a table or anything by accident. Everything is just thought out. Everything is perfect.

Well, enough of the advertising.

It’s now a week I’ve had the mac, and I have easily adjusted to it. There are some odd little quirks – for example any keyboard shortcut that would use Ctrl in Windows now uses the Command key. This key, being in a slightly different place, means you have to twist your fingers through five dimensions to undo and copy stuff, but you get used to it eventually. The menu bar being at the top is not, despite what you might think, something that it takes time to get used to â€“ it only took about five minutes, in fact.

There are a few things that are really different to Windows, though. Want to rename a file? In Windows, it’s right click/rename. In Mac? Press Enter. Want to close a program? Well, in Windows, closing the window is enough, isn’t it? Not on the Mac. Close a Window and you only do that â€“ close the Window. You need to quit the app with Cmd+Q to actually fully close it and remove it from the RAM.

It’s different. In some ways very different. Imagine the difference, between, say, a washing line and and a dryer â€“ they both do the same jobs, but in some very different ways. Perhaps that is a bad example â€“ after all, you don’t have to peg files to hard drives. 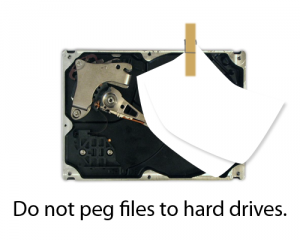 Next thing to look at: Programs. Not all of my programs are available on the Mac, so what do I use? Well, some things are quite simple â€“ there’s Opera for Mac, Skype for Mac, Audacity for Mac, as well as Photoshop and Dreamweaver. iTunes was preinstalled along with the rest of the iLife suite.

That was, unfortunately, basically where it ended. Arming myself with various websites, though (heh, doesn’t that sound so nerdy?), I have managed to find various programs that can do the things I want. Adium is a good instant messenger for Mac, analogous to Pidgin (aka Gaim). Transmission is an excellent torrent client. Apple’s own Mail and iCal together basically remove my need for Outlook. For now, NeoOffice is a fair alternative to MS Office for Mac, which I will not buy right now on account of the fact it will be updated later in the year. There are various other programs I have, including Stuffit Expander, which unzips almost all archive formats, Smultron, a text editor not dissimilar to Programmers Notepad, and Silverkeeper, which is quite like the backup program I used on Windows, SyncToy.

On the Mac, there are various programs I didn’t use on Windows at all. Quicksilver is a simple app used to quicklaunch applications â€“ just press a keyboard shortcut, enter the first few letters of a program, and you can launch it straight away. As well as Quicksilver, there is Growl, the standard in notification systems for OS X which allows different programs to give you notifications through one system, maintaining a consistent look and feel of said notifications. The next is iGTD, a getting-things-done application, in which you can make quick tasks to remind you of things to do later on. Think of it like sticky-note reminders on speed.

So what, overall do I think of the Mac? Well, frankly, it’s awesome. It isn’t as difficult as you might think it is to switch to OS X, and once you get used to it (which takes a few days at the most), the speed and efficiency at which you can use it is incredible. I havent really tried any gaming on it yet, although I can imagine it would be very easy to get Windows installed and running on here. Obviously if you want to play around with overclocking, making your own computer, or are perpetually gaming, a Mac is not for you, at least not as a main computer. Otherwise, though, there should not be any other choice.

…Actually, there is one thing I dont like. Something that has been fantastically infamous with Macs for years. One thing, that Apple’s usability geniuses obviously havent thought about. One mouse button. One frigging mouse button. What the hell were you thinking, Apple?!

It doesnt bother me that much, really, as I have an awesome mouse (with seven buttons 8) ), and yes, I know a two-finger tap on the trackpad does a right click, but the two-finger tap is supposed to be reserved for middle click. Seriously, Apple, just give it another button. 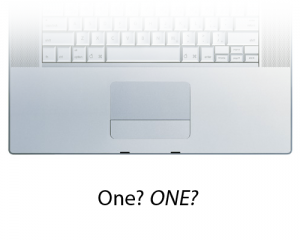 As a last thing, I’ll take a look back. I said that one of the reasons for me to get a Mac is that I would always be able to dual-boot or run Windows on it, now that Macs use Intel processors. But now… it’s just odd. I don’t want to run Windows on the mac, because OS X is so good, so intuitive, so fast and efficient.

This, is the story of a switcher.