In 2 days of writing this article (April 6th), it’ll be Windows 1.01’s 20th birthday. It’s been 6 years since Windows XP was released. Now, the latest edition to the Windows family is Windows Vista.

I installed Windows Vista 2 weeks ago on my *low-end* (according to Vista) PC, 1GB RAM, 80gb hard drive, 128mb graphics and a 2.6ghz single-core CPU. The install worried me at first when I tried the Integrated Intel Graphics chip as the screen was all pixelated (looks like Windows 2000 on VMWare) so I switched to an old PCI graphics card which did the trick. I remember the first time I installed Windows XP. At the time I had no idea whether to choose NTFS or FAT32 and the Blue Screen at the start (not the BSOD) freaked me out too. Which was probably universal (it was on Ubuntu 5.1’s install cd). Now the Windows Vista install has a GUI, much like the MacOS X installer but the MacOS X install disk has a bunch of utilities (a bit like a LiveCD) on it. 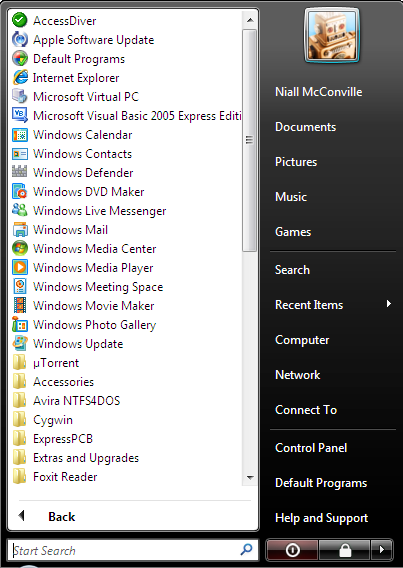 Now installing Vista was simple, I just selected the Partition I wanted to install, formatted, installed windows, rebooted, the installer did some more stuff and then rebooted. I admit the rebooting is quite annoying especially with a messed up BIOS. Then when it asks me to put a password on the administrator account warning me of the apparent dangers of not doing so (probably someone who just dumps the SAM file or bleh).

After all of that it loads up,Â  Windows Vista. Clean and stuff except my audio doesn’t work (same with OSx86). But, I still need to configure it to my liking. The most annoying feature of Vista is the UAC, but that’s easily turned off (with the exception of that annoying security feature). I have no internet connection on this install but the driver CD which came with my Wi-fi card worked perfectly after I got Vista to open the damn thing (No, I don’t want to burn my Driver CD?). The first thing I noticed was the new start menu. In Windows XP if you have (like me) 100+ programs all sorted into their Start menu you have to go through each one as long as your computer survives the hit from the massive screen fill. The new version is just a box where you scroll down or better yet search for the program you want. Also for anyone who likes to use the ‘Run’ prompt you’ll need to go into Start>Accessories this time which isn’t as quick but it’s still a few mouse clicks. I first installed mIRC as my main program so I could chat like I usually do. After that I installed Firefox which was incredibly, the same as the XP install (hard to believe isn’t it). As this is a clean install even the Windows Messenger, OneCare and stuff like that aren’t installed so after a large download (and installing of flash) I have all the features I need. To stick a needle in my arm and vaccinate myself I installed Kaspersky AV and put in my existing license. Now I thought it was time to install my audio drivers. After a quick search I found my Windows XP drivers for it. After a 10 minute install (slow) I got my favorite, driver-related friend, the BSOD, now I haven’t had one in around 2 years but I know that if it fails once it’ll happen again. So I reboot and pray that F8 is still in use, which it is. I boot into safe mode and after a minute of loading up all the damn components it tells me what went wrong with the all new improved error message thing. Know Windows tells me what kind of error I had in a simple Error Type:Bluescreen. I open up device manager (it flys when you don’t have all of that crap loading up) and uninstall the driver, reboot time. Disaster strikes again, the damn thing looks for the driver on startup, finds it and installs it. So I reboot ag….. (read the lines above). This time I deleted the driver and kicked my computer.

Yay! It’s been one day with Vista and I’ve managed to do one BSOD but it was all my fault (the first time) I got it. The next day I went to install Visual Basic 2005 (yes), VPC 2007 and VMWare. For those who (might) upgrade to Vista, VMWare isn’t compatible with Windows Vista for that you will need the beta (to test). You can find it here http://www.vmware.com/products/beta/ws/.

I’d like to point out this great utility for Vista called vLite. Essentially vLite is just like nLite but for Vista. nLite is a Windows XP install disk customizer. It allows you to make almost 100% automated installs and it will install your apps (like iTunes, Firefox) and put in the License key, your name and so on. vLite is the same as this, but for Vista which is probably handy for all those drivers you’ll need installed automatically and stuff.

Back to the story now? Good. I needed to update Vista (since it was out for around 5 months?) and I realised that the new Windows Update is in fact a single program instead of loading up IE. After downloading 3 updates and leaving it for an hour I get something new, it asks me if I want to postpone my restart! Before, I didn’t have XP Pro so I had this annoying box come up all the time with no way to turn it off, in Vista I can postpone it and get on with my stuff (like IRC :D).

Now this is one of Vista’s most mac-like feature. I wouldn’t say it’s directly copied from OS X but more of Vista catching up (on steroids). The defaul setting (I think) is the Clock, the Slideshow and the RSS reader. The clock and the slide show are pretty much boring. The RSS reader only has feeds from MSDN and so on. I’ve added the calander (8 days to go :D) and the currency conversion which seem to be the best there out of all the defaults. I’ve been on the website for more gadgets and it doesn’t really appeal to me yet.

My final rating on Vista in 8/10 since it needs some improvements in some specific areas but since it runs all of my old apps I’m still happy to use it as my daily OS.