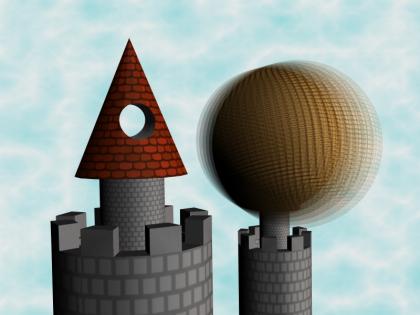 After a tragic turn of events for the gnomes in the gnome stronghold, the mayor in Pollnivneach is suing the gnomeball operators for suffering a hard blow to the head by the gnomeball they were playing with.

That’s right. The gnomeball they were using somehow made its way all the way from the gnome stronghold to the other end of Runescape and hit the mayor square on the temple, knocking him out for several hours.

The SWC, who were incredibly confused at this coincidence, went all around the world gathering information from witnesses describing just how it happened.

Fortunately, we got enough evidence to piece together a good representation of what exactly happened, and we quote from the various witnesses we interviewed (Their names are kept a secret for security reasons):

“Well, I threw the gnomeball from the back right to the net, but I threw too hard and it struck the rim, bouncing it back to the terrorbird pen. It aggravated them so much that a rogue terrorbird went ballistic and kicked the gnomeball right into the river. It floated away and went out of sight down the Baxtorian waterfall.”

“I saw a gnomeball float down the Ardougne river and my two boys, as curious and playful as they are, pulled it out and started fighting over it. One of them gave it a swift kick and sent it into the cyclops pen in the zoo, who winged it right into the Khazard battlefield. That was the last I saw of it.”

“Well, see, we were catapulting the Khazard troops, and lo and behold a gnomeball bounces down the field and lands in one of our super catapults right as we released it. It sailed far off-course with a right curve and flew all the way towards the ocean, where it landed in the crows nest of a trading ship. The S.S. Essence, I believe it was. Curious to the matter, I vaguely saw the navigator in the crows nest shout at it and chuck it back out into the ocean, where a speeding dagonnoth shooting towards the ship wound up swimming right into the gnomeball and got knocked out by it. The gnomeball itself flew out of sight towards Crandor Isle.”

“Right, me and my demon friends were just having our famous Roast Adventurer on the beach when this (censor) little ball thing struck the water near us and splashed the salty stuff all over our food. We just can’t stand the ocean and, well, we’re demons. We always want revenge. So I grabbed the ball and lobbed it right into the cave, figuring it’ll burn in the lava soon enough.”

“Hmph, some adventurer with his dragonbreath shield was trying to slay me as they all do. Then some rock or something comes flying into the cave and strikes the adventurer in the helmet knocking him out. Finally! I get some outside help at last! Or I would’ve, if that ball didn’t ricochet right off his head into mine. That thing was blunt and it hurt, so I rammed it into the volcano where it was sent into the air by an eruption. Haven’t had one of them in a few hundred years.”

“The volcano erupt and send rocks all over village, Bwana. One of rocks look like artifact, not a rock at all. It strike hiding Broodoo, knock face inside out, so we celebrate by chopping away large field in dedication to the ball to thank the Gods for sending artifact. We drank lots of cocktails and sang merry song. However, jogre get angry we chop its eating grounds and swung club at us and in panic, we threw artifact at it. But our faces were loaded and it hit the ball out of ball park and we had a home run. Last we saw of ball, it fly towards large distant magical tower.”

Dex reported that the witness who gave that report, suddenly and for some unknown reason went unconscious and the interview was continued by somebody completely different.

“Of COURSE I saw that ball! It shot through the window and crushed my new prototype Imp version 2.0! I got so mad that I summoned an army of imps to carry it to the wilderness and throw it into the lava maze! I don’t care what it was, whether it was a meteor or a magical stone. It was annoying, and I disposed of it. Don’t ask me where it went. My imps haven’t failed me yet, so you’re better off checking the wilderness. Now GET OUT OF HERE!”

“So, morsel, I was having a bath in the lava maze like I usually do every few days. It’s refreshing, you should come in. No? Ah well, I tried. Anyways, this rock was thrown off the ledge and hit my left head. Nobody, I repeat, NOBODY does that to ME! I grabbed it in my mouth … the left one, and I dashed with it towards Varrock in search of the wimp that threw it at me. I was so angry, though, that I accidentally dropped it and it bounced into one of those ancient teleportation machines. I gotta get me one for my cave. By the way, why are you even interested in that worthless piece of junk, anyways? A carnivore like you ought to be looking out for bear meat or something tasty. Why don’t you come to my cave and I’ll … prepare you something?”

“Waffles cheese dogs lampshades glore! Check my pulse, is it green? Death to all who like brown rocks! Peas porridge hot, peas porridge cold, peas porridge in the pot so throw it at grandma’s face! Work it harder, it’s not getting any easier for you.” – TRASLATION – “Some ball flew out of the ancient portal, hit me in the foot (It has a foot?!?), and flew back in, vanishing befoure I could retaliate against it. I got so mad I teleported the Rogues Den into the ocean.”

“So, like, we were just chillin’. You know, guardin’ our camp, like we always do. Usually against adventurers, who like, just come in to buy stuff from our general store and our good-for-nothing cook. Seriously. That guy? He can’t cook right, but he does keep us fed, so I s’ppose that’s OK. Don’t know why we even, like, attack those adventurers if all they do is buy stuff from us and, you know, those clue scroll things where they dig and get attacked. Quite amusin’ if you ask me. Anyways, I’m just checkin’ out the Dark Warrior Castle because, well, that’s all there is to look at out here. Then I see this ball thing come flyin’ out of the portal nearby, y’know, and just fall into one of their catapults, and this one guy there was just, so happy to finally get somethin’ to launch the catapult with, that he launched it. I think it went towards Varrock or somethin’. I dunno. Hey, is that one of the King Black Dragon’s heads?”

“One was simply tending to one’s garden that one had made oneself. Then this filthy peasant plaything comes flying out from the sky and pummels one’s husband (Thank Saradomin) square in the face before he could argue with one as he always does. Men, nowadays, you can never find any good ones. Then the plaything bounced off his rubbery face into the Varrock marketplace and one of those low-life kids owned by that dreadful cat lady goes and kicks it back onto the castle roof and into one of our cannons right as it’s doing our hourly salute. One swears, one of these days Roald has GOT to get that hour bell fixed. The plaything was shot out of ones sight and flew towards that scorching-hot desert land that one has never liked. One thinks that King Roald should turn that land into a mountain. One would rather like to look at a mountain then sand.”

“I was just flying my glider in circles to land in Al Kharid and a gnomeball comes flying out of nowhere and bounces off me towards that one heavily guarded camp in the desert. I was lucky to be alive, though I can’t say the same for that Zezima person I was flying. He fell right off and landed in the kebab seller’s chimney, headfirst. Poor guy. If that didn’t kill him, he’s gonna be suffering for life.”

“What? A gnomeball? I thought that was one of our slaves’ doing, so I made them work an extra hour each day for such insolence. Ah well, production has increased. So where was I- oh yeah. The ‘gnomeball’ as you so called it struck me between the bridges and flew towards Pollnivneach and made me fall down right in front of my guards. When I came too several hours later, they should thank their lucky stars they weren’t laughing at me. This wouldn’t have happened if I was still the navigator for the S.S. Essence.”

From there, the gnomeball struck the Pollnivneach mayor and finally came to a stop in the smoky well where it got caught in a Dust Devil’s mouth. We pulled it out along with a couple of dragon chains and made it into a trophy for the new gnome “Farthest Kick” contest they now hold annually.

Also, as a result of the lawsuit, they are now making gnomeballs far less bouncy then usual to prevent future accidents like this from ever happening again.