Ever since the past incident involving a footstool and a very angry wife, it has been believed that the ways that someone could die have reached its peak in stupidity.

Unfortunately, it has been proved wrong today.

Hundreds of corpses littered the streets of Ardougne market yesterday, each of them either brutally stabbed, sniped, slashed, crushed, maged, or bored.

The unbelievable cause for this bloodshed, as witness and field reporter Dex states, was a 1287 porcelain tea-cup, found lying in the middle of the fray.

At first, we had believed Dex to be joking around trying to get out of the consequences resulting from one of his “situations” with his emotions, but upon interviewing other witnesses, we had to conclude that he wasn’t part of it.

Of course, I still think it was his fault.

It started when a begger asked a rich nobleman to buy a teacup from him, one which he picked off the streets, so he may feed his family.

Disgusted by his nose alone, the nobleman swatted the teacup out of the begger’s hand, resulting in some pretty impressive air-time.

The teacup struck the head of an adventurer with only one hit point left, who was trying to steal a cake from the cake stall to heal himself, and killed him.

Upon dying to another player, the laws withholding the immunity that the adventurers had against each other had been broken and the ever-sneaky attack option filled the screen.

Immediately all heck broke loose, as a case of every man for himself was now upon Ardougne. Many died, and before they could be looted, the killers died as well.

Once the SWC arrived on the scene to reset the immunity, all that was left was a bunch of corpses and perhaps 300 000 000 coins worth of stuff on the ground.
King Lathas has now proclaimed that no tea-cups are to be swatted in the streets from now on, and is enforcing it with a punishment of 3 spankings and a time-out.

The stuff and money, since there was no one left to return it to, went to the SWC for no reason.

Farmer Fran had to burn his crops and livestock last week due to an act most fowl indeed.

The Evil Chicken, known throughout Runescape as the Evil Chicken and to the Spanish as Pollo Malvado, paid him a visit and plagued Fran’s farm with his spit.

Apparently, there was nothing wrong with his spit. It was ordinary chicken spit. However, to a farmer, it’s a plague that symbolizes poisonous crops and diseased livestock.

The Evil Chicken walked past the farm, looking through the gate, and spat into the field.

Immediately, Farmer Fran killed all his livestock and piled it all together in the middle of the field.

He then covered it with lighter fluid and propane gasoline (that’s what he calls it) and set it ablaze, lighting half of Lumbridge that night.

Of course, after the SWC carefully inspected the spit, we immediately found no trace of a plague or disease, or at least anything that would cause all the plants and animals in a farm to go bad.

Just goes to show you that you can’t let your life be controlled by superstition.

GOBLIN GENERALS GET INTO FIGHT

Big surprise today – the goblin generals of the goblin village got into a major fight resulting in the loss of facial bone and eyeball status amongst them and a number of witnesses.

The two ugly green things, upon arguing of a trivial matter of some strange concern, fisted it out on a 1 on 1 death-match in order to settle the dispute.

During the fight, their fellow goblins either got bored or left or somehow got involved in the fight by either agreeing with one of the generals or poking other goblins with a very large fork.

Several casualties were experienced, all of them from goblin origin.

Field reporter Dex went into the scene sometime after the aftermath to ask just what in Saradomin’s name caused such a harsh civil war and interviewed Goblin general Bentnoze, who was the only one of the two capable of speaking at the moment.

In that moment, General Bentnoze suffered an unknowingly caused concussion and was rendered unconscious in an instant. General Wartface was hastily recovered to continue the interview.

Wartface went into a comma immediately after the interview, so Dex just left.

Basically, what happened was that both generals got into a fight, they started fighting, and before long they wound up killing each other or bringing themselves to a point where they were so wounded and beat up that they were unable to continue fighting.

The irony was that neither of the generals were wearing shoes at that time.

The safety and well-being of 2 of Runescape’s major cities was questioned last Tuesday.

The guards of Varrock and Falador went on strike in an epic attempt to change the ways of their jobs.

The plan was that all guards currently hired traveled to Falador square and started a riot with signs and swords, shouting for higher pay, better armor, and no more being attacked by other people.

It worked to an extent, but there was one small thing they accidentally overlooked (beginning to notice a pattern yet?).

The Falador square was a multi-combat area, close by the dwarven black guard cannon manufacturers.

As soon as it started, it ended when a clan of adventurers decided to set up a fully functional cannon party in the exact same area as the guards strike.

The strike was over, and the monarchs of Varrock and Falador hired a brand new staff without the thoughts and ideas of formulating another guards strike. 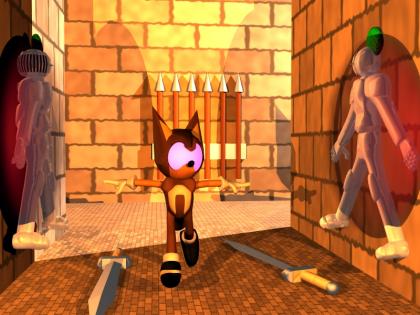 Our next article of news involves a infiltration by our own field reporter Dex Sonar.

As curious as anyone was, his objective was to locate and find out what the King of Falador actually looked like and why all the secrecy was in place.

Being equally curious, the SWC agreed to assist in his infiltration, which occurred last night at Falador castle.

Gia threw Alex 43 into the 4th story window (made it on the third try) and Alex 43 proceeded to haul Dex up by rope.

Once inside, Alex 43 secured the corridor while Dex made his intrusion. Gia patrolled the premises along the outer walls to ensure Alex 43 and Dex were able to get out easily.

While I caused a distraction involving a barrel of beer and a voice amplification spell just outside the White Knights Castle, security was directed away from the interior, allowing Dex to get further into the restricted areas a lot more easier.

From there, it was all Dex. For the while, we were unsure of what was going on inside. However, we were still able to maintain Dex’s position by watching out for the White Knights flying out of windows.

After a while, there was a pause and sudden silence. After a moment of hesitation, Alex 43 abandoned his position and went searching for Dex. Gia, noticing that Alex 43 suddenly abandoned position, abandoned his own position and broke in by brute force.

All the while, of course, I was still outside doing my part to draw out as many White knights as possible, so I don’t have much detailed information about what happened in there.

All I know was that I was knocked out somehow and woke up in the SWC headquarters.

It appeared that Alex 43 and Gia rendezvoused with Dex, who had actually completed his mission and got a good first-hand look at the King of Falador.

Upon asking him about the King of Falador, he told us that he sworn secrecy to what he had seen and experienced that night, much to our disappointment.

Then he told us anyways.

We will uphold this secrecy for King Vallance and honor it. The world can wait a few more weeks.

The SWC had witnessed one of the most confusing and questionably possible events they ever had this morning.

Dharok the Wretched, known to all for his great strength and ability to score 58s in the right condition, had spawned in the middle of Lumbridge on a non-members world.

Upon appearing there, Dharok was confused by his surroundings and attacked at random. Thousands died over and over again.

The SWC was immediately informed and sent to quell the matter and figure out just what happened.

The methods used in the ceasefire involved 2 kettles of nettle tea, a full-body submission, and an exclusive interview with Dharok himself.

However, he has asked us not to quote him, and though I tried to write it here anyways, Alex 43 locked me in the closet for a few hours as a result and erased it.

Basically, what had happened was that Dharok was getting his tomb raided by a high-level mage.

Before he died, the player’s membership expired and immediately whisked him away to the non-members world, seeing as that’s a precaution each player is outfitted with if they lose their membership status.

Unfortunately, since Dharok was bound to the player by the yellow-arrow binding, he had to respawn next to the player in order to continue fighting, since this teleport was not a variable set to have Dharok return to his tomb.

The result was that Dharok appeared in Lumbridge alongside the mage, who in turn fled, as he was unable to keep using ancient magics.

Lumbridge is safe now; we have transported Dharok back to his tomb by a method we deemed “necessary”, and all is normal once again. 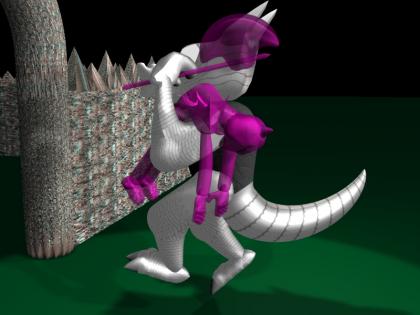 This article is filed under Dex and Manya, Runescape. You can follow any responses to this entry through the RSS 2.0 feed. Both comments and pings are currently closed.
Navigation