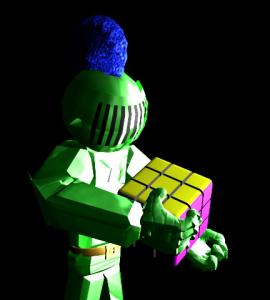 For a while now, one of the main priorities of Jagex is to out-fit a number of different logical puzzles in Runescape. Thatâ€™s understandable, for the essence of fun resides in discovery and challenges. If Runescape was all fishing and killing monsters, then there would be no fun in it whatsoever. Instead, it would feel more like a chore then a game.

The only thing that keeps somebody attached to a task is either discovery or challenge. We read books because we want to discover new things about a character or what happens next. We play card games with each other for the challenge of trying to beat their best friend. If you were a consecutive winner, then you would not know that a game gets more fun when you lose at it a lot. When you lose at something, you acknowledge the challenge and strive towards the discovery of the feeling of what itâ€™s like to win.

For example, I sometimes play Halo. The easy mode is boring to me because Iâ€™ve beat it over and over again and have experienced what itâ€™s like to win. Instead, I play the hard or legendary levels because not only is there much more of a challenge, but I also keep on dying. Dying in a gameâ€™s not boring, thatâ€™s for sure. In fact, I purposely kill myself a lot in attempt to make it as funny and ridiculous as possible (Eg â€“ How high can I fly when a wrath blows me up?). Not just that, but I also play for the feeling of accomplishment of being able to beat the hardest levels that Halo can throw at me.

Same goes with Runescape. If you die, then the challenge is getting your items back. You play Runescape as a game, so itâ€™s supposed to be fun. In your eyes, whatâ€™s more fun: fishing shark and chopping wood in an attempt to get that dragon chain back or actually fighting the monsters with the chain?

No, this isnâ€™t the second part of my Anti-boredom guide. This is instead the reason why you shouldnâ€™t cast aside a level 3 clue scroll just because it gave you a puzzle box. This is the reason why itâ€™s actually worth getting a death talisman from Mournings End Part 2. This is why you should immediately start the One Small Favor Quest.

Iâ€™M NO GOOD AT PUZZLES!

If youâ€™re one of those people who donâ€™t want to do puzzles because youâ€™re not good at them, use guides for quests because you donâ€™t want to have to think (or get the benefit ASAP), or paid Glough the 200 000 gold to get the control box done, I understand. I used to be like you guys, except I didnâ€™t have the idea that guides existed back then and suffered through quests and puzzles. I watched in envy at someone do a rubics cube in 10 minutes, jealously laughed at someone juggling 3 balls with his eyes closed, and wished that I knew how to play minesweeper!

â€¦ well, I still canâ€™t do the rubics cube yet, but I found out how to juggle by the book, and I now know at least how to not screw up a game of minesweeper, so I guess thatâ€™s some accomplishment I should be proud of.

Iâ€™m trying to prove to you guys that even though puzzles are challenging and you might not have the knowledge (or patience) to solve them, itâ€™s still by all means possible. All it takes is some practice, patience, and a lot of willpower (something that you can also develop over time).

Same thing goes with the Runescape puzzles. Before you immediately consult a quest guide, actually take the time and look at what an NPC is saying to you. 95% of the time, he will tell you DIRECTLY where to go or what to do. In fact, some tasks are so simple that consulting a guide to do it is simply embarrassing when you look back at it.

However, looking at a guide for tips and strategies rather then solving the puzzle altogether are fine. In fact, I encourage you guys to look up these kinds of guides, because you can learn these sorts of things and even start applying your own homemade strategies. Itâ€™s just like learning how to juggle â€“ practice and making the effort to actually do it.

Ok, letâ€™s start off with 2 of the most popular types of puzzles in Runescape: The sudoku and the puzzle box. The sudoku, which is accessed by completing the Ali Morrisane mini-quest, allows you to buy lots of discounted runes without having to wait for them to spawn. Their prices donâ€™t change, either, so you can buy all-you-want chaos runes for 100 coins each. The same goes with nature runes, cosmics, laws, deaths, bloods, and even souls.

Give it a shot. Log into Runescape, head straight to Al Kharid and talk to Ali Morrisane. If you didnâ€™t do The Feud, itâ€™s quite a simple quest with its own puzzles. Thisâ€™ll be a perfect opportunity for you to try out a quest on your own without using a guide.

However, it does come at a bit of a cost other then coins. In order to access the discounts, you have to complete a sudoku. The basic rules are that you have to get (usually in the case of having the numbers 1 – 9) 1 rune stone in each row, each column, and each 3 X 3 box. It looks complex, but itâ€™s one of those puzzles where you have to take one step at a time.

Focus on one type of rune stone at a time. If you canâ€™t find any place to put it in any of the 9 boxes, then focus on another. Itâ€™s not very easy to make a guide on completed sudokus, but there are plenty of guides on tips on completing sudokus.

The other puzzle you will no doubt end up with is the puzzle box. The puzzle box is randomly obtained during a clue scroll, usually from riddles referring to another NPC. The puzzle box, in reality, is even simpler then the sudoku. Itâ€™s just a matter of, once again, focusing on one part at a time instead of the whole puzzle.

Start the puzzle box by completing the top row first, then the second row below that, and then the third row.. When there are only 2 rows left, get the 2 squares on the left done, then the 2 squares after that, and youâ€™ll end up with only 6 squares in need of solving.

There really is only one trick you need to know, and that is the 6-square reversal trick. Using a 3 X 2 rectangle of squares, you can literally switch 2 squares around. This is usually done when 3 squares on a row are in the right places, but the last 2 are in the wrong spots.

Again, there are guides you can read of how to do this, but all you need to know is the 2-square switch, which is easy enough to discover yourself. Once you do it a number of times, the knowledge sticks with you and youâ€™ll be able to solve anything Jagex throws at you. Itâ€™s good to be prepared, because a quest might come out that requires you to solve a random sudoku or puzzle box, and no quest guide will be able to help you.

â€¦ and now, itâ€™s time to sound like Anti-Boredom Part 2. Doing puzzles are challenging, good for stimulating the brain, and theyâ€™re fun. Do at least a sudoku each morning to wake your brain up for school each day. You can usually buy real-life puzzle boxes or sudoku books at dollar stores.

WHAT OTHER PUZZLES ARE THERE?

Lately, the Jagex Team have been introducing a number of different puzzle games into Runescape. A prime example is the Games Room in Burthrope where players can compete with each other in specific games just like they could on the Jagex website without having to log out of Runescape. Nowadays, though, hardly anyone ever enters it anymore.

This is a good place for friends to go because they can chat while engaging in fair and harmless competition against each other. Itâ€™s sort of a break from the violence Runescape mainly offers. So far, the games room has only 4 games, but with time, more and more will appear.

Another nice puzzle game is the treasure trails themselves, housing riddles, maps, and coordinate clues. Unless they lead you into the unforgiving wilderness (16+ degrees north, 14+ degrees east), I suggest you try estimating and guess-and-checking the location on your own with the 3 coordinate tools. Each square is worth approximately 2 minutes, and there are 60 minutes in a degree.

Lots of intermediate and expert quests, like the Enlightening Journey and the Elemental Workshop also have puzzles in which you need patience and persistence to complete.

And again, the only way youâ€™ll ever learn is to actually try them for yourself. You can look up tips and hints, but I speak for Jagex when I say that I want you to try as much as you can on your own. The rewards will be so much more worth it and youâ€™ll even learn a few extra bits of information (The Jagex Team sometimes type in some facts regarding real-life).

To help you use your brain more and make the game more fun and challenging.

I canâ€™t stress it enough. Mind puzzles are fun. All you have to do is try and finish them a few times to understand.