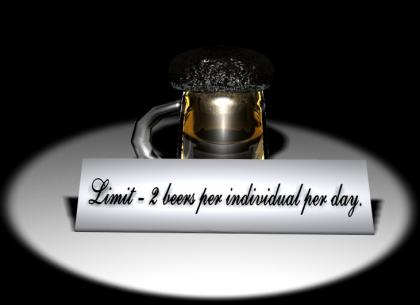 A large number of men gathered together with rakes, spades, bronze longswords, staffs, and whatever else they were able to salvage from the shops in Varrock and stormed the Varrock castle, casting away the puzzled guards and breaching the inner walls.

Once inside, they sought out King Roald, surrounded him and his wife, and forced him to repel the beer bill he had set concerning the amount of beer that one is allowed to consume a day.

This beer bill, reinstated last Friday, claimed that it was now a law that consuming more then two glasses of beer a day was officially against the law now and bartenders were warned that anyone caught drinking a third serving will be hanged alongside the bartender of that bar working on that day. No exceptions.

â€œThe reason for this bill,â€ said King Roald in an interview with Dex of the Saradomin Warrior Chapel (SWC), â€œIs to not only help respectable citizens control their cravings and prevent over-drunkenness (Dex inquired about his terminology, but Roald didn’t listen), but also to conserve beer and make it less expensive to import the necessary ingredients for our brewery. The money I get in from beer taxes unfortunately arenâ€™t nearly enough to compensate for the importation costs, and the only way it will come close is if I raise beer to 15 coins a glass or increase taxes, and I know Iâ€™ll only get larger riots if I try something like that.â€

Varrock is in its thriving stages, and any attempt to raise prices will seriously impact the economy.

â€œThe problem by itself is the drinking.â€ said Roald, â€œMore and more people are darkening our streets with acts of vandalism and destruction, and not remembering anything about it the next morning. Sometimes they light a large bonfire in the street or even set a building on fire under the influence of the drink. You won’t believe the complaints I’ve gotten from Thesselia this past month.â€

Indeed, Varrock has for some time been plagued by drunks and people without enough brain cells remaining to know that a window should not be intentionally broken. Simply walking down a street would give yield to a number of broken windows, uprooted plants, and other forms of unnecessary damage. Such disciplinary acts brought havoc to a number of activist groups, charities, and even the SWC, who are all trying to make Varrock a better place to live.

â€œI felt that I was solving 2 of the townâ€™s problems at once with that bill.â€ said Roald, “But I instead created a hundred more.”

The over-drinkers usually consist of dwarven smiths, unsuccessful store-keepers, and people too poor to be able to afford to drink. Even the majority of the town guard, who always fancied a drink if they survived their daily duty, complained about the restrictions of the bill.

â€œItâ€™s not as though we live to drink,â€ said second-in-command guard captain Bin Dare, â€œItâ€™s just that we pay for our beers and whatever we do with them is our choice. Whether we drink them all in one sit-down or save them for later, King Roald should not be allowed to limit us because we’re his subjects. I mean, people all around buy tonnes of swords, arrows, and armor by the majority, and I think homicidal killings are whatâ€™s plaguing the town rather then alchohol. If he wants to put a bill on something, let it be the weapons bought. In fact, you know what? Itâ€™s insulting that the king doesnâ€™t think weâ€™re mature enough to know when enough is enough.â€

When Dex implied that there is a large majority that doesnâ€™t seem to think so, Bin swore under his breath and dismissed himself, leaving Dex to laugh in his face. And he did for a long time before pulled out of the room by Gia.

We told King Roald that beer is something that people get addicted to, and by using the thought of death to reinforce to cure their addiction will only lead to madness and insanity.

We quote Alex 43 who said, â€œThe people need a place to escape the pressures of the world. They work all day at selling, stealing, smithing, or whatever else they do for a living, and afterwards all they want is some time to be alone and have some fun. Trust me, hosting a parade or festival every evening is going to be much more expensive then importing beer. Plus, beer comes at a fairly low price, so they are able to afford enjoying themselves.

Itâ€™s true that sometimes they go too far, but maybe the limitation should not be the amount of beer to be consumed, but rather the extent that they consume it. Perhaps you should set up a training service for bartenders to stop people from drinking when they are showing signs of losing control of themselves. After all, the last thing that a person needs to start the next day with is a hang-over. Plus, it’s somewhat unreasonable that bartenders should make more money then hard-working smiths by standing behind a counter and handing over a full glass for a few coins.â€

King Roald, however, didnâ€™t seem to be listening, because his head was slumped over the seat and he was making low snoring sounds. We felt it was best to simply leave and take matters into our own hands.

We at the SWC got together and organized a survey asking Varrockâ€™s and Faladorâ€™s citizens about drinking habits and the consequence behind it. At one point, the barbarian outpost was suggested as a potential site, but we voted against even trying it at the last second, since we somewhat already had the results.

Upon interviewing 500 people and asking about the concerns of over-drinking, the results of the survey display that:

– 7% of the population isnâ€™t too concerned about it being a major problem.

– 9% of the population didnâ€™t think that over-drinking was a problem for them at all, and if they felt like it, they would do it themselves.

– 27% of the population was too drunk to answer.

We also asked what their insights of the bill were. The results:

– 46% of the population supported the bill because they dispised how much drinking their fellow humans were doing.

– 17% of the population supported the bill saying that theyâ€™d rather not their tax dollars be spent to pay for the importing of beer.

– 10% of the population was against the bill because of the limitations of freedom King Roald promised in his election speech.

– 27% of the population was too drunk to answer.

Finally, we asked everyone what should be done for the future of Varrock concerning beer in itself:

– 48% of the population wanted the bill to be reinstated with lesser restrictions.

– 12% of the population wanted the bill to remain unchanged.

– 13% of the population wanted beer to stay out of the hands of politics.

– 27% of the population was too hung-over to answer.

For the time being, King Roald has dismissed the laws of the bill and is allowing the population to drink to their hearts merry. He only prays that they will remain merry and that the city guards will concern themselves more with dealing with drunks rather then joining them. We have also given our survey to the Varrock Herald for distribution to concerned citizens, hoping we have at least brought attention to the matter.