At the end of September, 2006, the Jagex Team have released one of their most useful free-to-play update in nearly 5 years. Their goal was to eliminate all confusion to the aspect of playing RuneScape to mainly encourage starting players to realize the full benefits of the game without having to beg for free stuff or advice.

Unfortunately, not everyone knows how to consult and utilize the manual to learn the basic aspects of the game. To compensate for this, the Jagex Team (the creators of Runescape), have over the years introduced a number of in-game helping mini-quests and NPCs.

The biggest of these are tutorial island and the stronghold of security. The tutorial island is something that players must go through before they are released into the true game. The stronghold of security is basically an optional mini-game which gives a 10 000 gold coin and fighting boot reward for anyone who takes the time to go through it and learn how to keep their accounts secure.

These updates, which I personally call NACRU, are in fact the opposites of the challenges that Jagex throws at us by the usual weekly update. Instead of figuring things out for yourself and enduring a challenging quest (unless one decides to â€œcheatâ€ and use a quest guide), players learn how to compensate for themselves and do these quests on their own without the use of guides.

The Jagex Team doesnâ€™t want the people of the world to become reliable on others by nature. Runescape is easy to get seduced by, and events that may occur between players and NPCs might have an effect on the mind of the real-life people behind the players. Jagex, instead of getting rid of this, wish to take advantage of it by teaching people the proper ways of doing things on their own and not having to solely rely on handouts and player-made guides. They also donâ€™t want to have to create the very thing they are trying to prevent.

And thatâ€™s where NACRU comes in. This new one, especially.

Lumbridge is mostly popular for being the default spawning area. Sooner or later, everyone finds himself or herself standing in this small run-of-the-mill village neighboring Varrock, Draynor, and Al Kharid.

In this NACRU of September, 2006, Jagex had introduced a number of tutors to the village of Lumbridge, each of them describing a certain skill and helping players out mostly with free stuff and advice â€“ the 2 essential requirements of a starting player.

At least, that’s what most of them believe them to be.

They can be found all around Lumbridge, in the nearby surrounding areas like the Lumbridge Swamp, and in Varrock near the western bank. Check the guide list at the bottom of this article for details about them.

Another handy tool which players can access practically anywhere is the Lumbridge Home teleport. Unlike the other spells, itâ€™s free, but requires a long casting and charging time. It will be interrupted if someone is attacked while casting it, so it is suggested that no one rely on this in the wilderness, as they remain vulnerable and immobile during casting. This spell is mainly for players who have gotten lost, but if anyone wants to use it to get to Lumbridge quickly for any reason, they are free to do so.

Finally, to help players get around; the Jagex Team updated the signs all around Runescape so you can manually check them instead of examine. The camera will scroll to point north and the signs will appropriately state what is in each direction. 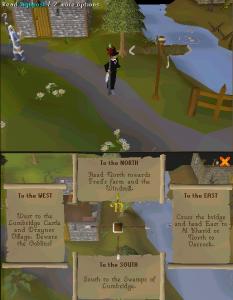 The first thing, which everybody is going to immediately notice once they log in, is a graphical change of the main player interface. Meaning, the Jagex Team changed a number of in-game options around, graphical and position.

The icons have been redesigned to look a little more like what they should represent, mostly by shading and some detail. The positions look the same, but they donâ€™t seem to go very well together like the other icons did, since some of them have a larger shading technique then others, as well as coloring methods. See for yourself.

Jagex have also replaced worded buttons with pictures portraying the idea. Mostly, this has been done with the quick-clicks, like the options menu. You can now access the run, split private chat, house, accept aid, mouse, and even a new chat effects button as well as volume bars for music, sounds, brightness, and an all new ambient sounds option, which adds to the atmosphere more effectively (and less annoyingly) then music. The auto-retaliate option has been moved to the combat screen.

This words-to-picture change has been most effectively done with the emotes, which now occupy an entire menu option on their own and are organized in classes and types by different pictures of types of characters. For example, aÂ jester in a funnyÂ suit portrays the silly dance moves while a knight in full armor does basic hand gestures and a mime shows all the mime emotes.

All the armor screen got is an extra button that opens up a separate window, which you can manually put on and take off clothes and armors, view the stat bonuses instantly and easily, look at how much weight youâ€™re carrying, and check out your character close up at the same time. It will even show close-up what your character is doing at the moment, whether itâ€™s attacking, casting spells, walking, or just standing around. Good for taking screenshots and posing.

Other then that, there was just a little coloring changes here and there in the interface as well as a new compass. Something that anyone who is OK with change will get used to. If one thinks about it, this is probably like what a Runescape 3 would look like. How many of you hate this new interface, yet wish for a Runescape 3? Be careful of what you wish for, because you obviously arenâ€™t ready for one.

This is not for someone with a poor quality sound card: Ambiance.

Whenever you are chopping trees or fishing, you will hear a few recognizable sounds like birds and flowing water. In the wilderness, one will hear distant and close-by creaks and howls, giving the place a deeper sense of fright. Dungeons will emit loud, echoing growls of large, heavy beasts prowling the inside. There are a number of sounds to be heard everywhere in Runescape. However, unlike the music, you are unable to change what sort of ambiance you want to hear. That would just be plain silly, wouldnâ€™t it?

Also, the newcomers map has ben updated to look a lot more like a map. Nothing too special except it looks a lot better.

Hereâ€™s a list of their locations and what they do:

ADVICE: Although not a skill by itself, the Jagex team thought it fit to describe banking as something one must learn about. After all, anyone who is anyone is going to use the bank SOMETIME in his or her Runescape lives.

He tells you how to access your bank account and set your PIN number while operating a fully functional bank in Lumbridge. Anybody can talk to him and right-click the bank booth to access their bank accounts.

FREEBIES: He stores your items; he doesnâ€™t donate them. He doesnâ€™t give you anything.

LOCATION: Between the Lumbridge General Store and Lumbridge Castle.

ADVICE: Tells people how to fight other monsters by melee by discussing the different types of weapons of Runescape, theyâ€™re styles of attack, and some good tips on fighting monsters stronger or weaker then yourself.

FREEBIES: Gives people who talk to him training swords and shields. Not very strong, but theyâ€™re still free to use and kill with.

LOCATION: The house with a range inside, next door to the graveyard.

ADVICE: He tells about all the different things a player can cook and how to cook them. For example, heâ€™ll describe how to use flour and water to make a pie base, then how to add it to a pie dish along with an ingredient, and finally cook it.

FREEBIES: None to my knowledge. However, with all those farms nearby, you donâ€™t really need anything from this guy.

LOCATION: Second floor of the Lumbridge castle, standing near the spinning wheel.

ADVICE: He will explain the crafting skill by telling you about making armor, jewelery, etc. You can learn glassblowing by talking to the tutor on Entrana near the furnace.

FREEBIES: None. Heâ€™ll tell you what you need for crafting and where to buy it, but he doesnâ€™t really give you anything. Crafting equipment is mostly 1 gold coin each, anyways.

LOCATION: Along the coastline just south of the graveyard. A new passage has opened through the graveyard fence.

ADVICE: Tells players how to fish, the different kinds of fish of Runescape, the equipment needed to fish them, and how to cook them. He even mentions manta rays and the Trawler mini-game.

FREEBIES: Gives players a small net to fish at the fishing spots nearby.

LOCATION: Farther south along the coastline, past the fishing tutor. Youâ€™ll find him in a chasm of copper and tin ore.

ADVICE: He will tell you about mining. The different ores you can mine, how coal is required for smelting, and the different pickaxes you can get.

FREEBIES: He gives players a pickaxe if they donâ€™t have one in their bank or their inventory (or their backs, for that matter).

LOCATION: The Saradomin church just outside the Lumbridge castle.

ADVICE: Tells you basically about prayer. How to effectively use it and about the different kinds of bones in Runescape. She even has something about wyvern bones.

FREEBIES: Nothing. Sheâ€™s no killer, man. Whatâ€™d you expect?

ADVICE: He will tell you about smithing bars and what you can make out of them. He has an apprentice at the Lumbridge furnace that will explain how to make the metal bars from ore. His apprentice doesnâ€™t give you anything, though.

FREEBIES: A hammer, but only if you donâ€™t buy one from any general store around for only 1 coin. Cheapo.

LOCATION: Near the western-most bridge in Lumbridge, right next to the forgery.

FREEBIES: A hatchet. â€¦ yeah, that wasnâ€™t too hard to figure out.