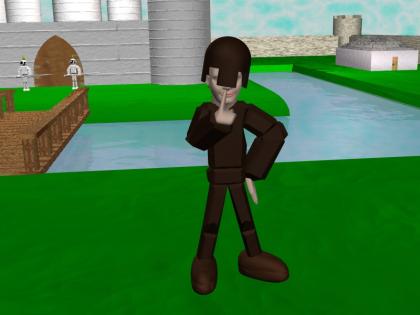 There was a great commotion in Falador yesterday as a town guard, the one standing just in front of the western Falador bank, deliberately and shockingly picked his nose in front of the public eye. Countless witnesses are suing the Falador Guard for losses of confidence in the guard system, appetite, and lunch. The Civil Convenience Center is also suing for damages and messes of the roads and streets of Falador as well.

Witnesses were speechless as they observed the guard slowly move his arm upwards, point his finger out of his always-enclosed hand, and stuck it up his nose in an attempt to either remove, replace, or add something to it. Once realizing that he had an unexpected audience, he quickly snapped back to his regular pose and continued standing and walking without purpose or reason as though nothing happened.

â€œIâ€™m very sorry you all had to see that.â€ said the guard upon interviewing, â€œBut there are some things a person just has to do.â€

Following the interview was a massive line-up of shocked citizens complaining and commenting on actually hearing a guard say something rather then â€œWhat do you think youâ€™re doing?â€.

â€œI just couldnâ€™t believe it.â€ said Karl 67, a witness to this strange, though spectacular event, â€œI was going to pickpocket him, but seeing where his hands have been, in both his own pocket and his â€¦ well, you know, I decided that maybe I shouldnâ€™t do it.â€

The majority of the population started suing the Falador Guard for the ineffectiveness of their members. Files were sent on poor manner of training, disrespect for the respecters of the law, and a number of others too unimportant (and downright hilarious) to state.

â€œWe fully understand that the concern of our citizens to the effectiveness of our Guard is the highest priority of Falador.â€ said Sir T. Ness, captain of the Guard, â€œCitizens need guards they can count on to stand still and stare at nothing in particular or die a slow and silent death when they are attacked.â€

An inspection of the Guard Training Program was immediately suggested and carried out 3 hours after the incident. An interview was conducted about the facilities and training programs:

â€œOur guard training facilities are quite straightforward.â€ explained the Chief Trainer, Sir Cumfrance, â€œOnce they apply for the job, all recruits and future victim- I mean guards go through 5 weeks of training. In the first week, they take up the art of walking from point A to point B making it seem like they have some life in them and arenâ€™t stupid.

In the second week, they are specially trained in the abilities to carry around 30 gold coins at a time in a very large pocket prone to easy pick pocketing. From their own pay, of course. They also learn how to replenish the 30 coins in less then a second if they just so happened to get robbed. They are disciplined in the proper manner if they fail to get this maneuver correct.

The third week is strictly vocal training, teaching guards to say and only say â€œWhat do you think youâ€™re doingâ€ and â€œHey, get your hands off of there!â€. All recruits are also trained in vocal exercises to ensure that they sound the same, no matter who is on the post, giving the impression that no guard is dead.

The fourth and fifth weeks are both dedicated to combat training. Guards are trained to suck when they engage in combat against a civilian or a random adventurer looking for some spare change. They are also trained to deal a high amount of damage every time ONLY when they are being pick pocketed, to show everyone that crime doesnâ€™t pay. They also learn to carry random pieces of useless junk around to drop when- sorry, IF they are killed. All over-achievers get to carry a random piece of paper with a few jotted words making the receiver go somewhere else in pursuit of a pile of junk, saving the remainder of the guards from civilian temptation.

With these programs, we can ensure that each and every guard will aimlessly walk around and not watch for any thieves except if theyâ€™re being mugged themselves, and will not complain or shout for help when someone with a really big sword cuts off all their limbs.â€

We thanked him for the interview. He died 5 minutes after by our part-time interviewer, Chaza340.

After some careful examination into the attendance rosters, it appeared that this guard in question had by mistake skipped a day of training where they learned the very important rule of not moving when not walking. Instead of himself, he had sent a voodoo dummy made of grain and jute fibers that looked a bit like him that he found in a pawn shop, mistaking it for himself, and Sir Cumfrance unfortunately couldnâ€™t tell the difference either.

A trail was called this morning, but the guard in question had already been killed by Commandernad, who faces no charges for the deed. Instead, Sir Cumstances the Guard Coordinator and Financial Advisor will be sitting in for him instead. The trial will commence just as soon as somebody can find a jury, a judge, a couple of lawyers, and a trial room.