The first update in June was an improvement to the Pest Control mini-game. It involved a new in-game interface to assist the player, not to mention new and better ways to spend your hard earned points. One small but helpful update comes into play while you are waiting in the lander before the game begins.

First of all, it lets you know how many people are in the lander and ready to begin. Also, it informs you of how many players are required to start the game (5), and also the limit (25). If the maximum number of players is reached, the game will automatically start.

In-game, the new interface is even more helpful and informative.

(Numbers referring to those on the image)

#1: The numbers next to the Void Knight flag signifies the current health of the Void Knight. It begins at 200, displayed in a bright green color. As the Knightâ€™s health lowers, the color turns red, letting you know that the Knight is near death.

#2: Another update for Pest Control is a rule to prevent a player from sitting around doing nothing while the rest of his teammates do the job for him, and then getting a point even after doing nothing. The new rule requires you to inflict 50 or more damage points to the portals and monsters. You can also gain 5 damage points for repairing a barrier. The numbers next to the image of a sword records how much damage you have dealt. Once you reach the required 50 damage points, the numbers turn from red to green, alerting you that you have enough.

#3: In my opinion, this is the most helpful feature of the new interface. It has four images that represent the four different portals on the island. The numbers above each one signify the individual health of all four. Each portal has 250 health points, and similar to the Void Knightâ€™s health, the numbers turn red as the portalâ€™s health nears zero. Once a portalâ€™s health reaches zero, a new icon comes up, representing a destroyed portal. Basically, it is the icon of the portal with a large red X across it. For an example see the next to last portal in the image.

Not only did they improve the interface for this mini-game, but Jagex also added some fantastic new items to collect, and more reasons to save up your points. 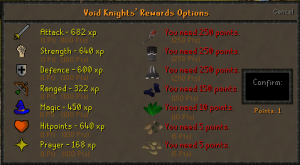 In addition to spending one point for the given amount of EXP for certain skills, you also have the option of saving up 100 points, therefore gaining EXP in larger amounts. Not only that, but if you choose to save up and spend 100 points, you receive an extra 10% of experience. In addition to skill EXP, Jagex also added mineral, herb, and seed packs, not to mention Void Knight armor that you can earn. By buying packs, you gain a certain amount of whatever item that pack represented. (Please note that the herb pack option does not appear in the image above because my level is below 25, causing that particular pack not to appear.) If you are a hard saver and have a lot of time on your hands, you might even want to consider taking on the challenge of collecting enough points to purchase Void Knight armor. Each piece, aside from the gloves, costs 250 points each, the max amount of points you can collect. The gloves, worth 150 points, are still nothing to sneeze at. All in all, wearing the complete outfit is a sign of complete mastering of the mini-game; a true accomplishment.
There are no visible flaws, and I have seen no discontent with any of the additions. It helps the player immensely, allowing him to play the game knowing everything he needs to know, and giving him something to look forward to once he has all the points he needs. All together, I think Jagex did an excellent job updating Pest Control.